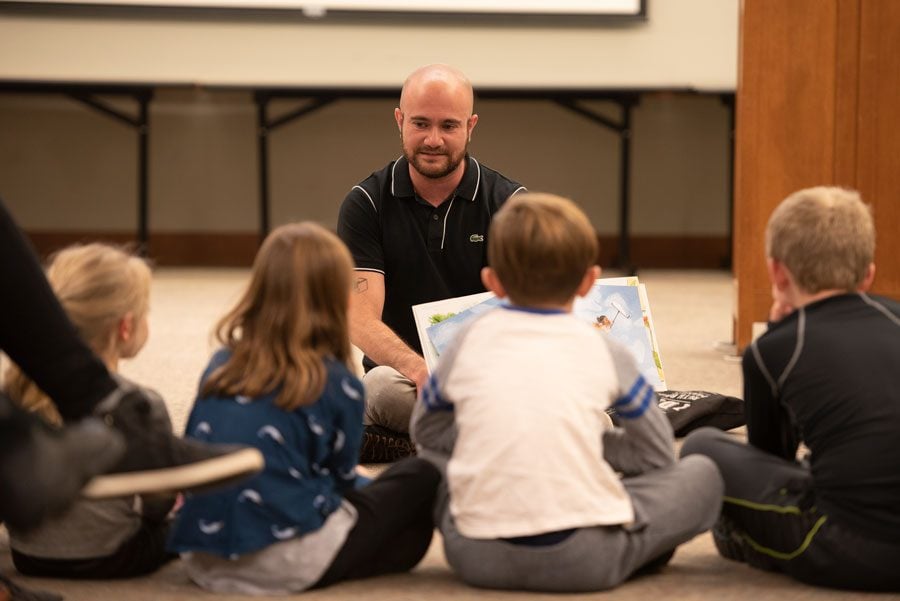 Kyle Lukoff reads to children at Evanston Public Library. One of Lukoff’s stories, “When Aidan Became a Brother,” explores transgender identity and the feeling of having a new sibling.

Lukoff read three stories he wrote, as well as a story from author Mac Barnett to the group of nine children. In one of his most popular books “When Aidan Became a Brother,” Lukoff combined the themes of realizing transgender identity and having a newborn sibling.

“When Aidan Became a Brother” follows the story of Aidan, starting with when Aidan was born and when everyone thought that he was a girl. However, he soon realized that he was different from the other girls, and Aidan’s family adjusted, including buying him new clothes, so that he could be more comfortable and have a new life. When his parents told him that they were going to have a baby, Aidan wanted to make sure that everything was right for his sibling.

After the event, Lukoff explained his intentions behind this book.

“I want trans kids to be able to see themselves, I want kids who aren’t trans to understand it a little better,” Lukoff said. “I want adults to know that books about trans people can be more than just coming out or transition stories, or stories about violence and trauma.”

The book uses simple but powerful language to explain Aidan’s exploration of his identity. The phrase, “It was hard to tell his parents what he knew about himself, but it was even harder not to,” resonated with the emotional dilemma experienced by transgender children.

Although “When Aidan Becomes a Brother” can be seen as a children’s book, Lukoff said, he intentionally wrote the books for adults as well as children.

“A lot of adults would be giving it (the book) to one another… it heals,” said Betsy Bird, EPL’s collection development manager. “This (book) is more than just a message book — it has a message, but it is not beating you over the head with it. It has a great story, and it has beautiful art.”

Lukoff will give another presentation at Lincolnwood Public Library on Tuesday, and Eti Berland, youth and teen services librarian at Lincolnwood, said she’s excited to welcome Lukoff to her library and share his books with the children.

“It’s about making some sort of a difference in our community, that starts with ourselves, and being more welcoming, more accepting, more kind to each other,” Berland said.

Lukoff said he decided to write Aidan’s story after realizing that he did not know one single good transgender-themed picture book in the market.