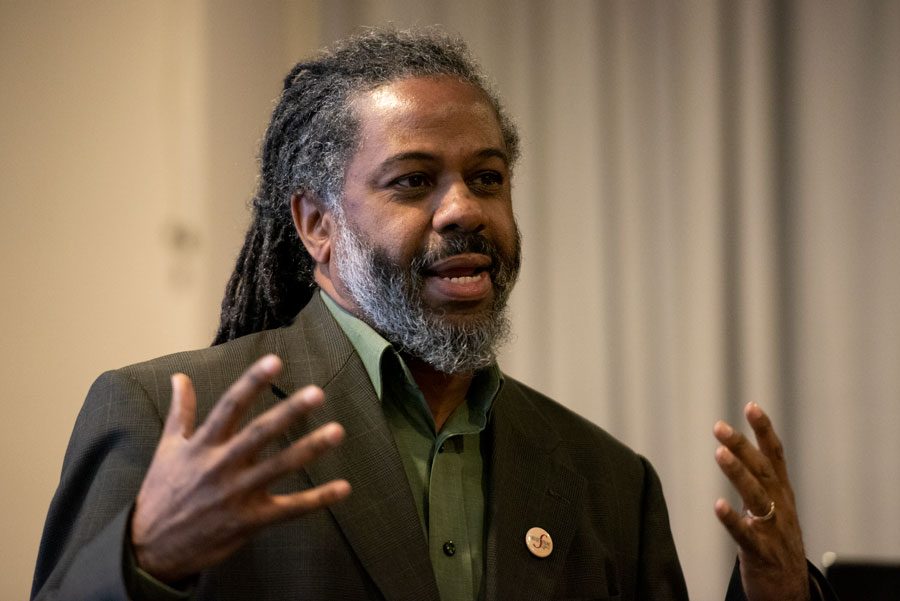 Dino Robinson talks at NCDC dialogue Monday about sundown towns in Illinois, redlining in Evanston and housing segregation at Northwestern.

The word “community” means more than just what can be found on Northwestern’s campus, Dino Robinson said during an Evanston and Northwestern community dinner Monday.

The dinner, titled “Northwestern in Evanston: Where Do We Stand?” was hosted by Northwestern Community Development Corps, a student group that works to promote engagement within the University, Evanston and Chicago. The conversation began with a presentation from Robinson, founder of Shorefront Legacy Center, the North Shore’s only community archives for black history.

The event aimed to break down Northwestern’s relationship with Evanston and the city’s marginalized communities. Robinson spoke about sundown towns in Illinois, redlining in Evanston and housing segregation at Northwestern.

“One thing I’ve seen in Northwestern vocabulary as well is the use of ‘community,’” Robinson said. “So when Northwestern uses ‘community,’ they’re only talking about the campus. The next phase they talk about is ‘global,’ which means they skip over everything, ignore everywhere else.”

Robinson criticized the common Northwestern attitude toward reflecting only on the community on campus, rather than engaging with the community in Evanston — particularly marginalized communities that have been historically pushed into certain areas, through redlining and redistricting.

He also criticized how Northwestern handled some of these issues, particularly with housing. He said Northwestern’s history of segregation and deflection of blame resulted in much longer delays with integration.

“As succinct as I can make it, Northwestern always tried to, in my opinion, kick the can down the alley,” Robinson said. “Challenges over the years with housing, specifically, Northwestern would not fully take a stance on what the position would be. Even when pressured by city governments, they didn’t want to extend their policy on campus.”

To help mitigate institutional oppression, Robinson said he and his team at Shorefront work to collect, preserve and educate people about black history on Chicago’s suburban North Shore.

“One of the things Shorefront really focuses on is the aspect of controlling your narrative,” Robinson said. “So I believe that all communities should have that option and that venue to control its own narrative.”

The work that Robinson does with Shorefront is one of the main reasons why NCDC asked him to come to speak for this event. SESP senior Matt Casler, dialogues chair for NCDC, said because of the work NCDC does with Evanston, he knew he wanted to organize an event about Northwestern’s relationship with Evanston and was connected with Robinson through NCDC’s faculty advisor.

Casler said that the event came together organically with the help of input from different members of NCDC and ultimately took its final form after partnering with Sustained Dialogue.

“I think it was really productive,” Casler said. “Our ultimate goal was to get students to start thinking about this and to care about it, frankly, because the conversation with the university itself doesn’t always spearhead.”

Following the talk, three members of Sustained Dialogue helped facilitate a discussion with students about how they perceive Evanston and Northwestern’s impact in the community. Students also discussed better ways for Northwestern to support Evanston and how to be more intentional in using the space they take up.

Weinberg senior Erika Barrios was one of the facilitators and the Sustained Dialogue intern for Social Justice Education. She worked with Casler to formulate a set of questions to ask based on the key themes that Robinson was going to address.

“There were also a lot of really great ideas about how we exist as multiple communities and how we practice different habits that will help us as we move past Northwestern and past Evanston once we graduate,” Barrios said.

Barrios said that she enjoyed working with NCDC to address these issues and hopes the collaborations continue. She also said she was very happy with the way that students engaged with the topics and dialogue overall.

Casler said that the goal of the event was to get students to start thinking past the “Northwestern bubble” and reflect on how they view and treat the community in Evanston. He said that he felt the event was overall very productive.

“My main hope was that, if at least a few people from this room took something really strongly away from it, is that we as students have a lot of agency to do a lot of good if we ask the community what it needs and we put our energy and resources into what the community asks us to put them,” Casler said.