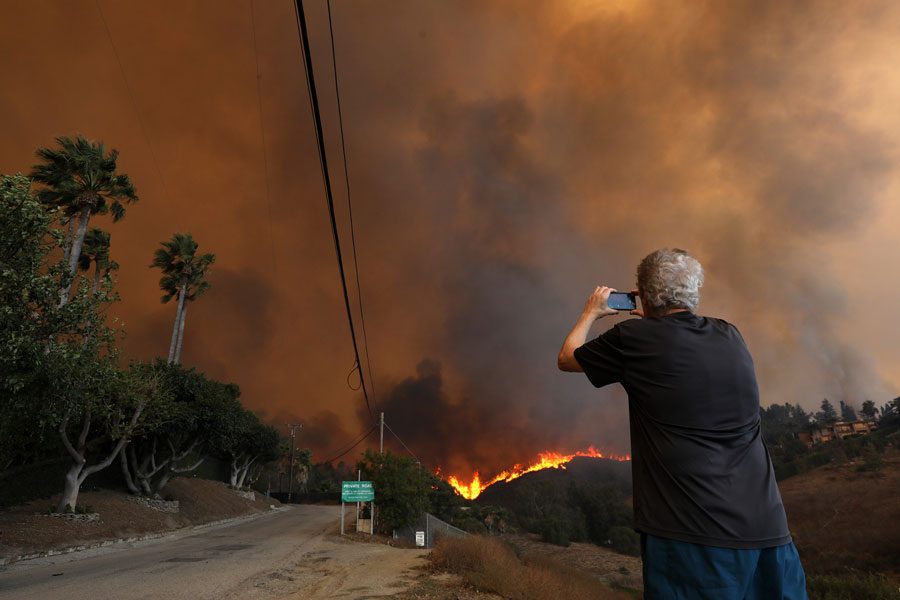 A resident shoots video of the Woolsey fire that threatens homes along West Winding Way in Los Angeles' Malibu on November 9, 2018.

In 2019, an estimated 198,392 acres have burned by a total of 6,190 incidents. 732 structures have been destroyed and there have been three fatalities due to the wildfires.

Medill Freshman Jack Izzo, from San Diego, said he often thinks about the threat of wildfires at home while away at Northwestern. He remembers evacuating his home when he was seven years old. Since then, he has experienced school cancellations due to poor air quality.

Izzo keeps track of the fires online but said he knows his family would contact him in the event of an emergency.

“It’s not at the top of my mind, but it’s definitely occurred to me,” Izzo said. “I’ve definitely thought about that like, ‘Dang, I am really not in the position to do anything if anything was to happen to my family or my house.’”

In October, the red zone — or an area with a high risk of wildfires— was just two miles away from Medill sophomore Navpreet Sekhon’s home in Los Angeles, and she said the threat of wildfires has impacted her emotional wellbeing at Northwestern.

“I wasn’t too freaked out, but, for a couple of hours I was just checking my phone constantly,” Sekhon said. “I skipped one of my classes that day because I was just like, ‘I don’t know what’s going to happen.’”

She said she was mostly worried for her mother who, as an empty nester, is often home alone.

Sekhon has news updates on her phone and tracks the fires online. She said the fires are one of the reasons why she does not want to live in California later in life.

“Why would you want to live somewhere where you’re always in danger?” she said. “You don’t have that environmental danger. You can control your safety in Chicago, but you can’t do that in LA.”

Weinberg freshman Benjamin Liu, from East Bay, Calif., remembered that last November, the wildfires caused such poor air quality that school closed for a day. Early on this academic year, there were power outages in Liu’s town due to a nearby fire.

”I thought about it as I was going to bed, even when I was in classes sometimes,” Liu said. “I was not too worried, but it was still there. It was a pretty consistent worry throughout the day.”

Liu noted that during the week when the fire was close to his home, it was a frequent topic of conversation when he was on the phone with his parents. However, now that it’s not impacting them as directly they don’t talk about it as much, he said.

Even though these NU students are far from the danger of the fires during the school year, they still worry for their friends and families back home.

“My entire state is on fire,” Sekhon said.