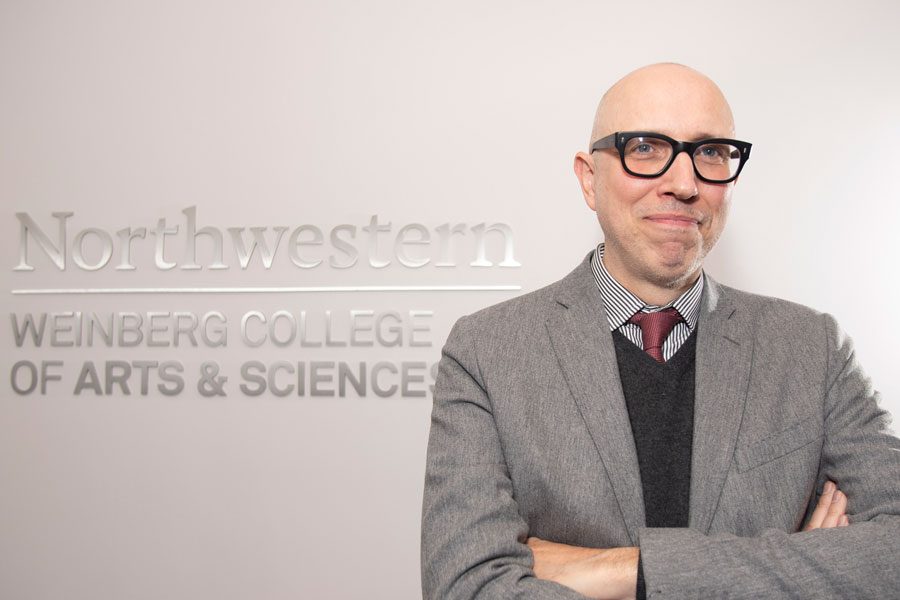 Dean Adrian Randolph. Randolph said Weinberg faces a constant struggle of providing enough support for faculty research and ensuring students are free to pursue a curriculum that interests them.

This is the second article in a series called “2020 Vision” which walks through the reflections and hopes student groups, administrators and others throughout Northwestern have on the past few years and upcoming new decade.

Entering the next decade, the Weinberg College of Arts and Sciences will focus on expanding its curricula and research in three main areas — the impact of data science in the world, the global intersectionality of identity and culture and how the natural sciences can transform the world, Weinberg Dean Adrian Randolph said.

In an interview with The Daily, Randolph, who was reappointed for a second five-year term as the Dean beginning on Sept. 1 of next year, said Weinberg has focused on data, culture and nature over his past five years as Dean. These three areas will remain an important part of Weinberg’s strategic plan moving forward.

“Data, culture and nature are key in our strategy,” Randolph said. “Those are the things that continue to drive me, be beacons as we continue in the next few years.”

Randolph said the college has put considerable energy into analyzing data across the social sciences, the natural sciences and the humanities, part of which resulted in the recent introduction of the data science minor.

During a time in which “most faculty are seeing themselves operating in an interdisciplinary space,” Randolph said Weinberg has also focused on the global intersectionality of culture, including interactions between religion, ethnic, and racial studies. Randolph hopes Weinberg will continue to make breakthroughs in how humans can solve global issues through the natural sciences.

“In this moment where humans can transform the world through science, how do we reflect on the way we use that power?” Randolph said. “Whether it’s global climate change, or whether its editing the human genome.”

Given these focuses, the college faces “the constant challenge” of ensuring that faculty have enough support in their academic fields and that students are free to pursue a curriculum that interests them, Randolph said.

Moving forward, Randolph said making a Northwestern education both financially and cultural accessible for students is also a priority.

Randolph said in terms of financial accessibility, he has focused on raising money for student scholarships and support for undergraduates who want to do research with college faculty.

In terms of cultural accessibility, Randolph said a new set of recommendations for the Weinberg curriculum, proposed in December by the college’s ad hoc Committee on Degree Requirements, was approved last spring. Weinberg convened a committee to move forward with implementation, Randolph said.

“There are a number of innovations, (such as) thinking through the first-year seminar a little bit and changing it, including an enhanced writing requirement,” Randolph said. “It’s also (about) opening up the curriculum and (making it) an important place for students to think about intercultural studies, both in the U.S. and globally.”

While Northwestern’s student body has grown to be more diverse, Weinberg’s tenure-line faculty remains 75 percent white, according to the 2018 Diversity and Inclusion Report. Randolph said depending on how the number is calculated, in some sciences, tenure-line faculty diversity may be even lower.

Randolph added that in some areas of study, faculty search is limited by the pool of eligible candidates, which highlights a separate but important problem in academia. Women who have PhDs in some sciences and social sciences can be very small, he said.

Since Randolph began his tenure, Weinberg has had 56 new faculty members accept offers, half of which were women and half of which were members of underrepresented minorities, he said. Weinberg began introducing an equity representative in each search committee two search cycles ago, he added.

“It’s our job to remind them that the decision they make in the fields they search and the processes they introduce can all help affect the outcome,” Randolph said.

Last year, the college conducted faculty searches to appoint tenure-track professors for the Latina and Latino Studies Program and the Asian American Studies Program, but only one tenure-line faculty member has been hired into LLSP, Randolph said.

“We’re working from a set of percentages that are not terrific, especially across disciplines,” Randolph said. “We clearly have to do better and just continue to push push push what is probably one of the most important things that we care about in our hiring.”

Randolph, however, is optimistic about the overall trajectory of the school, especially in areas like research. Extramural research funding increased by 32 percent over the last two years, which means that “we’re one of the fastest growing research units at the university and in America,” Randolph said.

“Let’s face it — it just keeps getting better,” Randolph said. “The one thing that consistently makes me happy to come here is talking with faculty members and staff, and students who are really contributing to making this a dynamic intellectual environment, and that’s a great thing every day.”