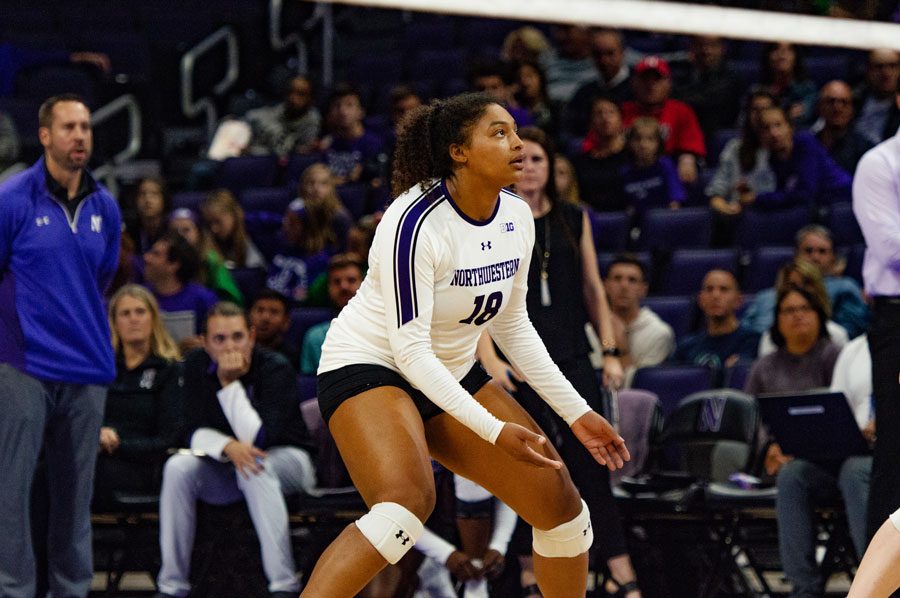 Nia Robinson prepares to receive a serve. She led the Cats with 12 kills on Saturday.

But NU couldn’t make it seven, falling in an intense five-set battle in front of nearly 3,000 fans in East Lansing, Mich.

The Cats (10-16, 1-13 Big Ten) remain last in the Big Ten, their only win coming last Friday in a sweep of the Spartans. By winning the rematch, Michigan State (14-10, 5-9) gained some much-needed momentum heading into the final weeks of the season.

The match started promisingly, as NU opened the first set on an 8-3 run and held on to win 25-20. The Spartans committed 10 total errors in the set, finishing with a lowly .026 hitting percentage.

“Michigan State had a slow start,” coach Shane Davis said. “We did a good job taking advantage and making plays in that first set.”

The Cats faltered in the second set, falling victim to a 12-2 Michigan State run en route to a 25-11 scoreline.

The third set ended much like the first, with NU scoring six straight to start off. The Spartans crawled back to tie the set at 23, but the Cats closed to secure a 25-23 victory. Once again, NU benefitted from 10 Michigan State errors.

Freshman middle blocker Desiree Becker led the charge in set three, recording four kills and three blocks. With another block in set five, Becker has notched four or more blocks in four straight matches after doing so only twice in the first half of the season.

“She might be her toughest critic, but she’s on a steady climb since day one,” Davis said. “Overall we’ve seen a steady progression in the right direction.”

The Cats’ performance receded dramatically in the fourth set, as NU committed 10 attack errors in a 25-14 loss.

“We did a poor job on our side of the net controlling the ball,” Davis said. “We just really need to work on consistency.”

There is one area the Cats have been consistent in this season: losing fifth sets.

Saturday was no different, as Michigan State led the entirety of the decisive fifth set, winning 15-10 to clinch the match. NU is now 1-5 this season in five-set matches.

“Sometimes our fifth set is becoming our worst set of the match,” Davis said. “We’ve got to find a way to be confident and win those sets.”

The Spartans spread the ball throughout the match, with five different players accumulating 12 or more points. Michigan State also finished with an impressive 10 service aces and 17 total blocks.

Junior outside hitter Nia Robinson led the Cats, finishing with 12 kills and a pair of blocks. Freshman outside hitter Temi Thomas-Ailara also added 11 kills in her second game back from injury.

NU hopes to salvage some wins in the coming weeks, facing three ranked opponents in its final six games.

“We’re minimizing our errors on our side of the net and just being a little bit more disciplined,” Davis said. “We’re giving ourselves some opportunities. We just gotta get over that barrier, but we’ll find a way.”