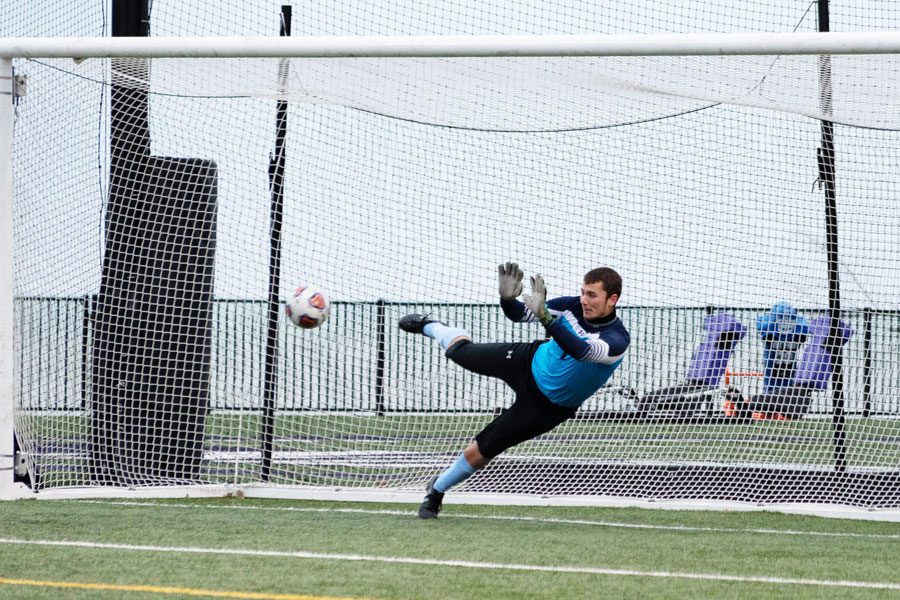 Miha Miskovic gives up a goal on a penalty kick. The Wildcats lost in the quarterfinal of the Big Ten Tournament.

In the 70th minute, Maryland midfielder David Kovacic sent a cross towards the box, intended for his teammate Nick Robinson. As Robinson went to receive the ball, Northwestern sophomore defenseman Jayson Cyrus attempted to deflect the pass, but accidentally ran into Robinson, knocking him to the ground.

The Wildcats defenseman put his head in his hands as the referee awarded a penalty kick to the Terrapins. A few moments later, All-Big Ten First Team honoree Eli Crognale sent the penalty into the net’s top right corner, the decisive goal in No. 4 seeded NU’s (8-8-2, 3-3-2 Big Ten) 1-0 loss to the No. 5 Terrapins (10-6-2, 3-3-2) in the Big Ten Tournament quarterfinals at Martin Stadium.

After upsetting the defending national champion 3-1 in September, the Cats were hoping to defeat Maryland once again to advance to the Big Ten Tournament semifinals for the first time since 2013. However, the squad fell just short.

“This team… finished .500,” coach Tim Lenahan said. “We’ll probably have two Top 25 wins. Those are things that haven’t happened around here for a while.”

NU played aggressively in the first half of the match, using its wingers to move the ball into the Terrapins’ third. Freshman midfielder Vicente Castro and senior midfielder Matt Moderwell — who was named to the All-Big Ten Second Team on Nov. 8 — were responsible for the Cats’ four shots on goal. NU also took five corner kicks.

During the first 45 minutes, Maryland took only two shots. However, during the second half, their offense flourished, firing six six shots and five corner kicks.

On the other hand, NU’s attack struggled, as Lenahan said playing into the wind helped Maryland “press” the Cats and weaken their ability to control the ball.

After Crognale’s penalty kick, NU’s best chance to tie the game came on a corner kick with 20 seconds left. As senior midfielder Mattias Tomasino sent the ball into the box, Miskovic — who had vacated his position between the posts to be an extra attacker — headed the ball to senior forward Mac Mazzola. Mazzola then sent the ball to senior defenseman Andrew McLoed, whose shot went wide left, allowing the Terrapins to lock up the 1-0 victory.

Maryland will now play No. 1 Indiana on Friday in the tournament’s semifinals.

Reflecting on the season, Lenahan wishes the Cats could’ve won a few more games, as he said 10 total wins likely would’ve been enough to give the team a spot in the NCAA Tournament. However, he was still proud of NU’s performance, especially its senior class.

“I’m happy for the seniors because they went out giving everything they had,” Lenahan said. “They went out and we got the most out of this program.”

Additionally, Lenahan directed praise towards the development of Mazzola and Moderwell, as he called them “two of the best players in the Big Ten this year.” Mazzola is a finalist for the Big Ten Sportsmanship Award.

Heading into the offseason and his nineteenth year leading the Cats, Lenahan is optimistic for his squad.

“We have a great path,” Lenahan said. “We got a couple guys to replace, but I really like our younger group and they really like to play soccer.”