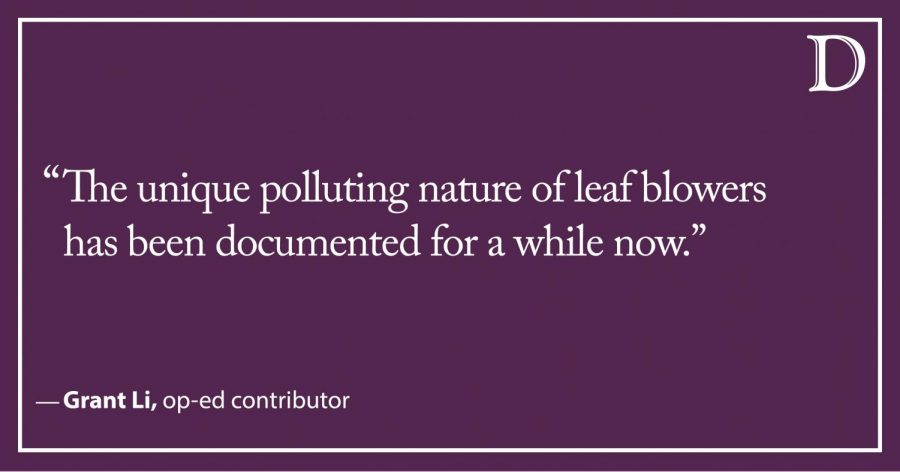 I grew up in northwest Connecticut, tucked in the southern end of the Green Mountains. The region is famous for its fall scenery as trees and mountains burst into wild colors. Even there, where leaves fall like ticker tape as students parade back to school, nobody treats the new layering on their lawn with the fanaticism that I’ve seen on this campus.

It’s less frequent now but throughout October, I would wake up and be greeted with the racket produced by leaf blowers outside my dorm. I didn’t really mind, but waking up day after day to see crews trying to rid the ground of leaves with such vengeance felt somewhat strange.

The polluting nature of leaf blowers has been documented for a while now. A two-stroke leaf blower pollutes more than a 6,200 pound pickup truck. Running the best-selling commercial leaf blower for an hour is equivalent to driving 1,100 miles on a 2017 Toyota Camry. Cities all over the country have been banning leaf blowers.

I can understand why workers on campus use leaf blowers. Having spent many falls raking leaves, I was always in the perennial business of begging my parents to purchase one for ourselves. No one wants the leaves sitting on their lawn over the winter, rotting and destroying the grass.

The debate around leaf blowers is reminiscent of the fuss over straws. People argued that in the big picture, banning straws would do very little. Instead, they argue we should be focusing on bigger change, not the little details. The same could be applied to leaf blowers. Honestly — and to their credit — the campus maintenance crews might already be using more efficient models, or even electric leaf blowers.

Yet when I walk to and from class, what feels really off-putting isn’t actually the particular model of leaf blower, or how obnoxiously noisy it is. It’s the fact that I saw the crews out there yesterday, the day before, and the day before that. It’s just seems so unnecessary.

The persistence and vigor to how the university deals with leaves is really quite incredible. The scene every morning of October makes you think that the administration believes if they leave the problem unaddressed, we’ll fall out of the top 10 of the US News and World Report rankings.

If the university devoted the same energy to first generation students, housing, or problems of importance in general, the student populace would be as happy as the manicured lawns.

So really, just chill out. Next fall, maybe just clear the leaves every week or two — the grass will be fine. Plus, it’s pretty and fun to walk through.

And switch to electric leaf blowers if you haven’t done so yet.

Grant Li is a Weinberg Sophomore. He can be contacted at [email protected] If you would like to respond publicly to this op-ed, send a Letter to the Editor to [email protected] The views expressed in this piece do not necessarily reflect the views of all staff members of The Daily Northwestern.