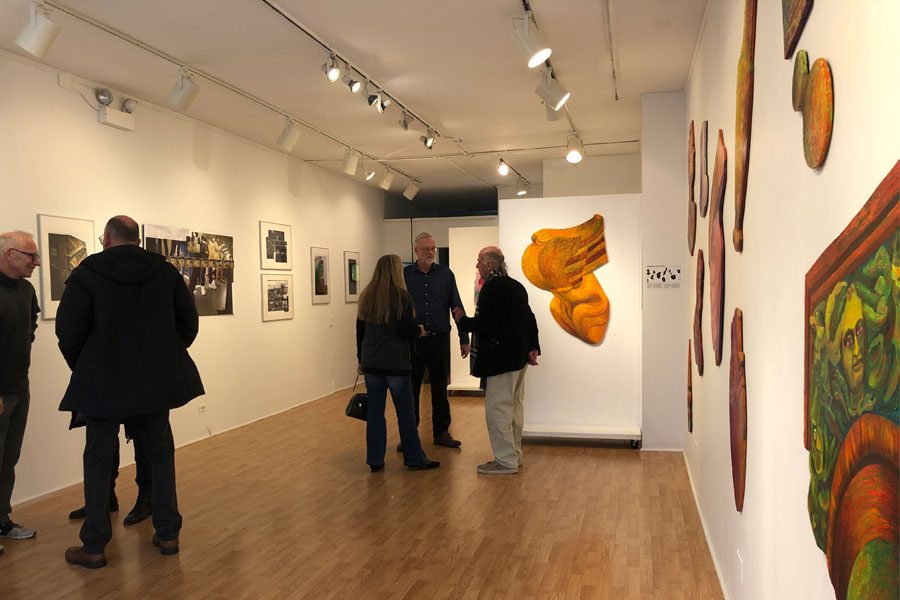 People in Space 900’s “Layers of Time” gallery. Artists Joanna Pinsky and Todd Anderson presented their artistic interpretations of the passage of time at a Sunday artists’ talk.

Joanna Pinsky and Todd Anderson presented their artistic interpretations about the passage of time at Sunday’s artists’ talk at Space 900, an Evanston collective and exhibition space

In their talk, Pinsky and Anderson explained their thought process behind the exhibit, entitled “Layers of Time.”

On one wall, Anderson exhibited photographs from as early as 1971 to the present. On the opposite side of the room, Pinksy displayed her art on paper as well as two-dimensional “shaped paintings” — paintings of artifacts on gatorboard.

Pinsky painted and displayed artifacts ranging from a Sphinx from the Metropolitan Museum of Art to profiles of Abraham Lincoln and an amphora — a tall ancient Greek or Roman jar. She said she conceptualized the display as “images you see as you’re about to fall asleep.”

Pinsky often paints other works of art including sculptures, historical artifacts and photographs. For her painting of an Abraham Lincoln sculpture, she said she intentionally painted his eyes open to infuse a depersonalized object with life. She added that she recontextualizes objects by incorporating bright colors in her work.

“I find a beauty in these objects,” Pinsky said. “Once upon a time, they were painted, and they had a whole other meaning. It’s kind of a blending of looking back and finding the beauty of something that I can’t really fully understand, but there’s something that remains. I’m looking at time as taking and transforming the images of the past.”

Anderson approached the concept of time from a different point of view. While he was studying photography at the Illinois Institute of Technology Institute of Design, he said he fell in love with filmmaking for its emphasis on time. He said his photographs in this exhibit attempt to meld static principles of photography with the dynamism of film.

One piece, titled “BART,” superimposes a series of still images of a moving San Francisco subway over candid photographs of passengers.

“I’ve tried to experiment and delve into a way to present time and static image,” Anderson said, “So that you could experience a story or event that would require time if it were a film, but is a static image.”

Other photographs depict locations or objects that no longer exist, such as a train station or an old bus. When Anderson photographed these images in 1971, he said they lacked obvious meaning. But with the passage of time, he said he has been able to piece together a story. These images explore the “timelessness” of a static image, he said.

Artist Rose Bonacorsi, who attended the talk, said she appreciated the uniqueness of Anderson’s work.

“There’s kind of a voice that’s going on that’s like the person is looking at the world without being seen,” she said. “It’s like a little slice of a candid world.”

Though Pinsky and Anderson’s work is varied, Anderson said they’re both grappling with the same fundamental question.

“What is time?” Anderson asked. “Is it something we made up, or does it really exist? That became the question between the two of us that we want to explore.”