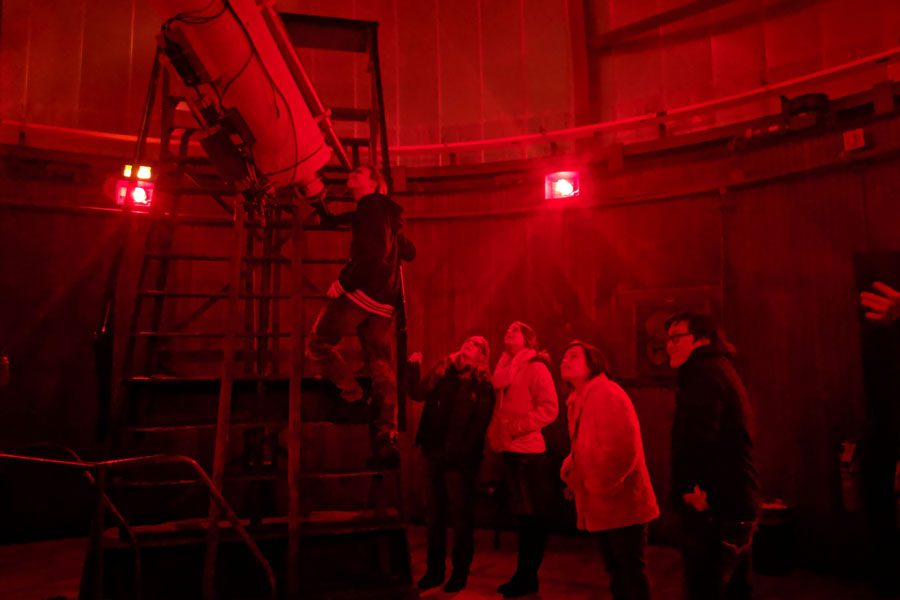 People stand in line under the red glow of the Dearborn Observatory to look through a telescope at the moon on Friday during the CIERA Astronomer Evening. Attendees could also attend a lecture by different researchers about their work in astronomical fields.

When researcher and doctoral student Chase Kimball (Weinberg ’17) explained how scientific understanding of space has advanced, he compared it to the evolution of film.

“It’s like you were watching the universe in silent film and now you have audio,” he said. “For all of human history, we’ve only had light and now we have the ripples in space time, which you can think of as the acoustics.”

Kimball studies compact objects like black holes and neutron stars and how they merge and create gravitational waves and ripples in space. Before, researchers were only able to use light to understand space, but new technology made it possible to measure these ripples and waves and produce a clearer picture of how, for instance, a black hole is formed.

Kimball and two other researchers described their work during Northwestern’s Center for Interdisciplinary Exploration and Research in Astrophysics Astronomer Evening last Friday at Dearborn Observatory. Every month, the public event gives attendees the chance to look through the observatory’s telescopes and listen to experts talk about their work in astronomy.

Although the event usually occurs on the last Friday of each month, it was moved to Family Weekend to give visiting families the opportunity to go to the observatory with their students.

Kimball called the noises the waves created “chirps” because they were similar to the sounds of birds chirping. He said by listening to the different “chirps” of waves, he could recognize the kinds of compact objects that were causing the waves.

“If I played a neutron star chirp, you could hear the difference,” Kimball said. “We analyze (chirps) with a computer, or with a really, really good ear to try and determine what kind of sources we’re looking at – what makes the chirps. So I think it’s really analogous to listening to birds.”

Doctoral student Candice Stauffer, one of the observatory guides, said she was surprised so many students hadn’t come to the observatory during their years at Northwestern.

Stauffer said because it was a little hazy outside on Friday, people could only see the moon, but a trip to the observatory was still worth it.

“I love looking through the telescope too,” Stauffer said. “Actually a lot of astronomy now is data science and computer programming so I don’t get to look through telescopes a whole lot… But I also love watching people watch the stars and the planets and, especially kids, get really excited about astronomy.”

There were two telescopes for people to look through and both were focused on the moon. Many people who came to the observatory — from parents of NU students to young children — appreciate the chance to look up at space.

Chris McMorrow drove to the observatory from Milwaukee after hearing about the event on Facebook. McMorrow said he and his partner turned the trip into a “nerdy date night.”

“This is just a fascinating subject for me,” McMorrow said. “It’s really just finding something bigger than yourself and getting to explore what’s beyond comprehension of what’s right in front of your face.”