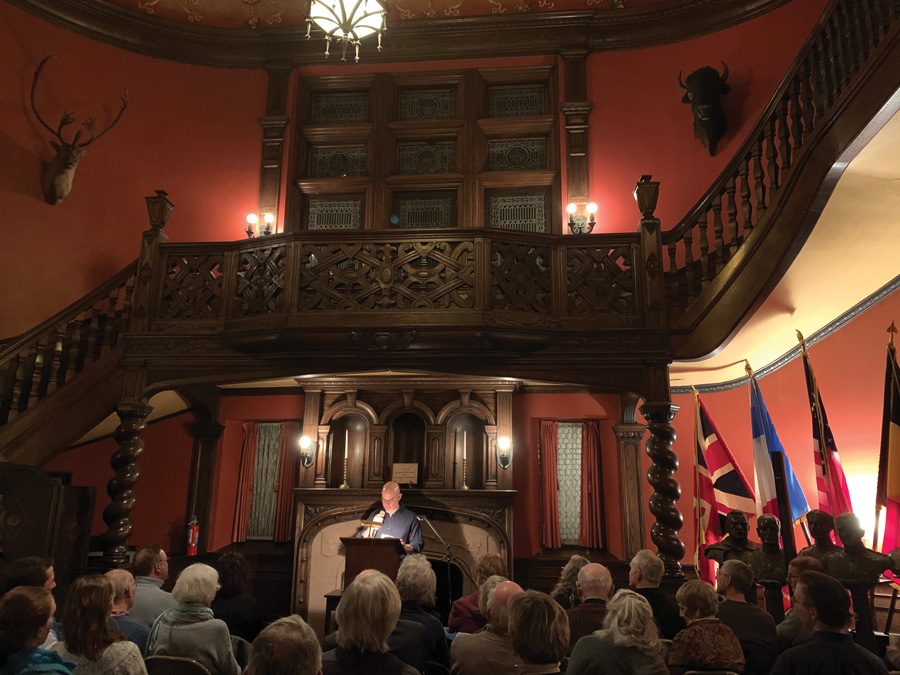 Josh Noel speaks about his book on craft beer at the Evanston History Center on Thursday.

Josh Noel, a beer and travel journalist for the Chicago Tribune, cracked open a cold one with a packed audience during his presentation about his latest book on craft beer.

The book, “Barrel-Aged Stout and Selling Out: Goose Island, Anheuser-Busch, and How Craft Beer Became Big Business,” documents the entrance of craft beer into the market and its growing popularity. The Evanston History Center hosted the event, and an Evanston craft brewery, Sketchbook Brewing Co., offered free alcoholic beverages to the audience at the event.

In 2011, Goose Island Beer Company, a Chicago craft brewery, sold the business to Anheuser-Busch InBev, one of the largest beer companies in the United States, Noel said.

According to the Brewers Association, an American craft brewer is a small and independent brewer. Specifically, the annual production of a craft brewer is 6 million barrels of beer or less, and this brewer cannot be owned by a large alcohol company that is not a craft brewer.

Therefore, after the transaction, Goose Island “is generally not viewed as a craft brewer because (Anheuser-Busch) is so big, but that does not mean that (Goose Island) does not produce craft beer,” Noel said.

During the event, Noel compared craft beer with light beer.

“Initially the attraction to light beer was calories… Craft beer serves as a reaction to that. Big, browny, boozy,” Noel said. “But now, craft beer is starting to pivot toward craft light beer… low-cal craft beer.”

According to Noel, craft beer is usually more expensive than macro-brand beer. However, Anheuser-Busch InBev has pushed down the price of craft beer.

He said Anheuser-Bush is good at “devaluing its products.”

“For people who need that financial advantage, that’s great,” Noel said. “But it makes it really hard for breweries like Sketchbook to compete.”

Jenny Thompson, the director of education at the history center, said they wanted to involve local breweries, and Sketchbook agreed to contribute.

She added that the history of prohibition in Evanston remains part of the quotidian, even though the city is no longer dry.

“If you ever buy alcohol in a grocery store, if the cashier is under 21, they have to go get someone else to scan the bottle,” Thompson said. “That’s like an old leftover from Evanston.”