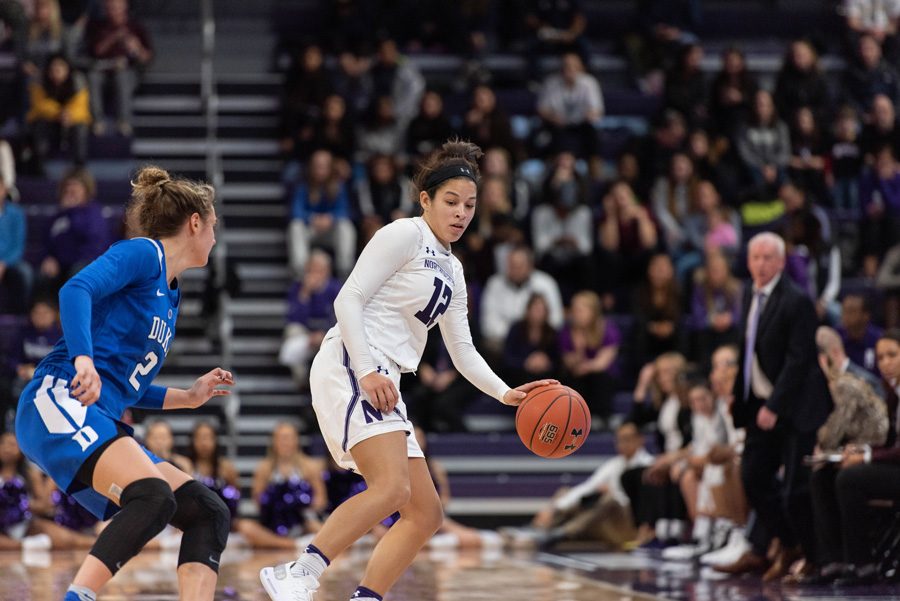 Veronica Burton fends off an oncoming defender. The sophomore guard could have a big impact on the team offensively this year.

Northwestern is coming off a season that played out like a Hollywood script, with a deep tournament run in the WNIT that saw the Cats’ almost-miracle fall short in the finals. It was fueled off the back of last-second game winners, improbable comeback rallies and the final act of star forward Pallas Kunaiyi-Akpanah’s career.

Now, Kunaiyi-Akpanah has graduated, and the team is aiming to come back with a vengeance. So who will now fill the leading role? Much of the preseason hype has surrounded junior guard Lindsey Pulliam, a First Team All-Big Ten selection last year. But while Pulliam is undoubtedly a prolific scorer, her productivity comes in spurts — there are times when her signature midrange jumper looks as unstoppable as Dirk Nowitzki’s did in his prime, as well as stretches when her shot runs colder than the ice planet of Hoth.

Burton, a sophomore guard, was a ridiculously efficient defender last season. Her steal rate — the percentage of opponent possessions she stole the ball — was 4.1 percent, per advanced analytics from the women’s basketball website Her Hoop Stats. She also got it done offensively, boasting an elite 2.4 assist to turnover ratio, which also ranked 40th in the country.

By more traditional stats, Burton stands out as well. The Massachusetts native averaged 3.6 assists per game, 2.6 steals per game and shot a team-leading 85.5 percent from the charity stripe.

Coach Joe McKeown also clearly believes in her, naming her captain in only her second year on the team. Burton joins Pulliam and senior forward Abi Scheid as the three trying to guide the Cats back to the NCAA Tournament.

“She was the best defensive player in the league last year, and maybe didn’t get recognized,” McKeown said. “Maybe the most underrated player in the Big Ten. But she was a freshman too. So we don’t worry a whole lot here.”

If and when Burton takes the next step this season, she’ll be the ringer the team so desperately needs. Here’s how she can do it.

Beyond the Arc: How Burton can fill NU’s offensive weakness

Last season, Northwestern’s scoring blueprint was pretty cut and dry — either feed the ball to Kunaiyi-Akpanah inside and let her bully the opposition in the paint or find Pulliam in the midrange and let her work her magic. However, the team had a glaring weakness behind the arc, as they shot a middle-of-the-pack 31 percent from 3-point land and scored less than 20 percent of their total points from the area. This predictability allowed defenses to key in on Pulliam and Kunaiyi-Akpanah, daring the Cats to hoist up threes.

For NU to become an NCAA tournament team this season and improve on its WNIT runner-up finish, this has to change. And Burton can help foster that change.

While Pulliam, the clear primary option on offense this year, has claimed she’s worked relentlessly on her three-point game over the summer, she’s yet to prove the results of her training in game action. Adding a three-pointer to her repertoire would dramatically alter the nature of her game — in each of the past two seasons, Pulliam scored less than 8 percent of her total points from behind the arc. She was also one of the worst 3-point shooters in the country last season, chucking up a ghastly 11.3 percent from deep.

So the answer is simple: give Burton more opportunities. Burton was the most efficient three-point shooter on the team last season, connecting on 36.8 percent of her shots behind the arc. But she took only about seven total shots per game, which was just the fifth-highest mark on the team. Burton has a quick release, good shot mechanics and is intelligent with her shot selection, so McKeown should design the game plan to get her as many opportunities as possible.

“From a Burton standpoint, (she has) a little chip on her shoulder and I want her to play that way,” McKeown said. “And you know, she’s tough as nails.”

Replacing Pallas: Burton has the ability to make up for the lost production

Last season, Kunayi-Akpanah’s usage rate — the percentage of plays during her time on the floor she finished by either shooting, getting to the line, or committing a turnover — was 26.6 percent, meaning there’s a sizable amount of offensive opportunity available within the team.

Burton has the ability to fill the 6-foot-2 hole left in the wake of Kunaiyi-Akpanah’s graduation. Last year, Burton’s usage rate was about 14.5 percent, which ranked in the bottom 20 percent of all players nationally.

If she can become more aggressive in creating her own shot as opposed to simply setting others up, the offense will benefit from her deadeye marksmanship. Some opportunity will undoubtedly go to freshmen guards Laya Hartman and Kaylah Rainey, but Burton is so efficient that she deserves a shot.

Pulliam’s usage doesn’t really have room to increase, as her 29.8 percent usage rate last season was one of the highest in the country. In fact, some might argue that Pulliam’s usage should actually decrease, as she forces up bad shots consistently, but if you reign her in, you miss out on Pulliam’s how-did-she-do-that shots.

Burton is a high IQ passer and defender, and has already showed a deep understanding of the game on the college level in her first season. Now, having earned McKeown’s trust, the biggest question that remains is how she will respond to the offense always running through her or Pulliam, or occasionally fellow backcourt mate Jordan Hamilton.

“That’s a scary combination,” Pulliam said. “That’s all I gotta say. I mean, I love playing with them. I think both of them can score, they can score the basketball. They’re great on defense, and I think they bring a lot to the table for the team.”