Women’s Basketball: NU looks to make its return to the NCAA Tournament 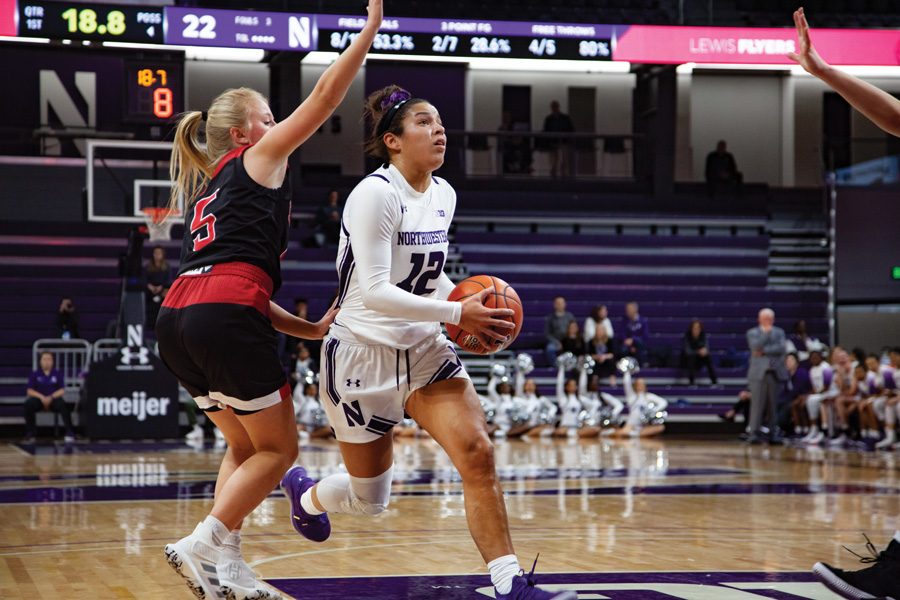 Veronica Burton drives to the basket. The sophomore guard led the team in steals last season.

Last season, Northwestern got a glimpse of what it looks like to win a championship. Playing against Arizona in Tuscon for the WNIT Championship, the Wildcats were beaten handily, leaving them so close to a taste of lifting a trophy.

NU hasn’t reached the NCAA tournament since the 2014-2015 season, when it was led by standout forward Nia Coffey. But this year, the Cats have their own set of star guards, juniors Lindsey Pulliam and Jordan Hamilton and sophomore Veronica Burton.

For this season to be a success, coach Joe McKeown wants the NU to do three things: Stay healthy, finish higher in the Big Ten than last year and put themselves in a position to make the NCAA Tournament.

And McKeown, as well as his team, will use last season as motivation for this season.

“Obviously, we want to finish it off. I think that’s how our players feel, which is what you want if you’re me. ” McKeown said. “You want them to have a little bittersweet outlook on this year.”

Last season, the Cats had an extremely talented roster and started off with five straight non-conference wins against teams like Duke and Florida. But then the injury bug started to hit NU.

Hamilton suffered injuries that kept her out for stretches of the 2018-2019 season. Forward Abi Scheid also missed a portion of the season with an injury of her own. McKeown said he watches game tape from last season and thinks about how good the team would’ve been if they were healthy.

If the Cats can stay healthy this season and avoid major injuries, NU has the potential to compete against most teams in the Big Ten. The lone problem they will have to answer is who is going to replace the production of center Pallas Kunaiyi-Akpanah.

Kunaiyi-Akpanah, who is now playing in Italy, was one of the best rebounders in the conference, averaging 11.2 rebounds per game and drawing comparisons to Moses Malone by McKeown.

If the Cats want to improve on their record in the Big Ten, they will have to find someone to replicate the her rebounding. But it won’t be one person who makes the difference, but rather the team as a whole.

“For me, it’s making sure I’m on the glass more,” Pulliam said. “We did lose a lot of rebounding from Pallas… it’s going to be more of a joint effort this year to get on the glass.”

Pulliam added the team hasn’t lost its prowess on defense with her loss either and she believes the team is going to be better on that side of the ball.

With an improved defense and an offense with loads of talent at guard and veterans in the frontcourt, NU can definitely make the jump within the conference.

The Cats return four of their top five scorers, and Pulliam, the team’s leading scorer last season, has expanded her range in the offseason. With big NCAA aspirations, NU has the talent to take them there.

“My approach doesn’t change. It’s been the same since I started playing basketball,” Pulliam said. “And that’s to come in and do what I do and win the game.”