Women’s Basketball: Northwestern blows out Lewis in exhibition game before the season 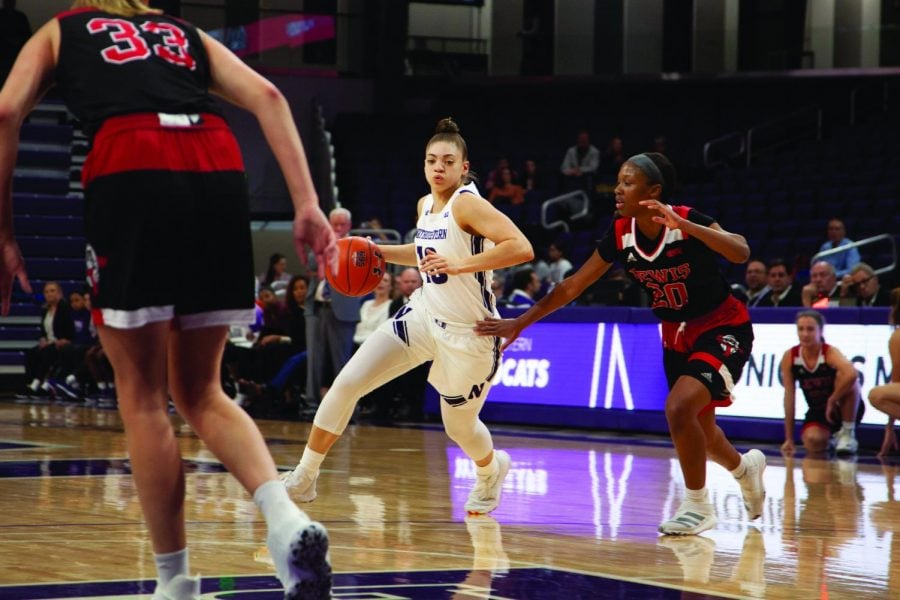 Lindsey Pulliam dribbles the ball. The junior guard had 15 points against Lewis on Wednesday.

During Wednesday’s exhibition game against Division II Lewis, junior guard Lindsey Pulliam displayed early on that Northwestern will attack with speed and aggression this year. The team captain missed two 3-pointers within the first minute of the game, something she said she worked on during the offseason, but still ended the game with 15 points.

Last season, the Wildcats ended on a low point — scoring a meager 42 points in a loss in the WNIT Finals to the Arizona. But Wednesday, NU surpassed that score by halftime, leading the Flyers by 29 points, before defeating Lewis 89-34.

“Everytime (Pulliam) shoots I’m thinking let’s get back on D because I think the ball’s going in,” coach Joe McKeown said. “When she gets hot, the only one that can really guard her is me, and that’s by taking her out of the game.”

While one of NU’s top guards thrived on Wednesday, junior guard Jordan Hamilton missed the contest. Last season, Hamilton finished second on the team in assists and fifth in total points last year.

Despite missing one of their lead ball handlers, the Cats still had three double-digit scorers in addition to Pulliam. Sophomore guard Sydney Wood and senior guard Byrdy Galernik matched Pulliam with 15 points, while sophomore forward Courtney Shaw finished with 11 points.

“I liked our depth, I thought people came in and gave us sparks, and they came in and changed the game at times and the pace,” McKeown said. “To be able to play a lot of players kind of gives you hope that we don’t lose a lot when we rotate people in. So I liked what I saw tonight.”

NU led by 36 points at the end of the third quarter which allowed for newcomers, including freshman guards Kaylah Rainey and Laya Hartman, to get off the bench and re-energize the team.

“Our bench definitely came with a lot of energy, so that’s always really fun to watch from the bench too,” Wood said. “When they come in and carry over what we started tonight. It was really exciting to see Kaylah and Laya score their first baskets.

In the fourth quarter, the Cats had five steals and limited Lewis’ offenses chances, allowing the Flyers only nine points in the final quarter. McKeown said that the Cats defense was a strong point for the team in the exhibition matchup which he hopes the team will continue to work on.

“I thought we did a lot of good things defensively which has really been our focus in practice,” McKeown said. “One of the things we’ve been working on every day is deflections and trying to get loose balls and turning them into transition buckets. We’re getting there… it’s just such a long season now and tonight was a good start.”