Football: Inside Hunter Johnson’s return to the field and his aching right knee 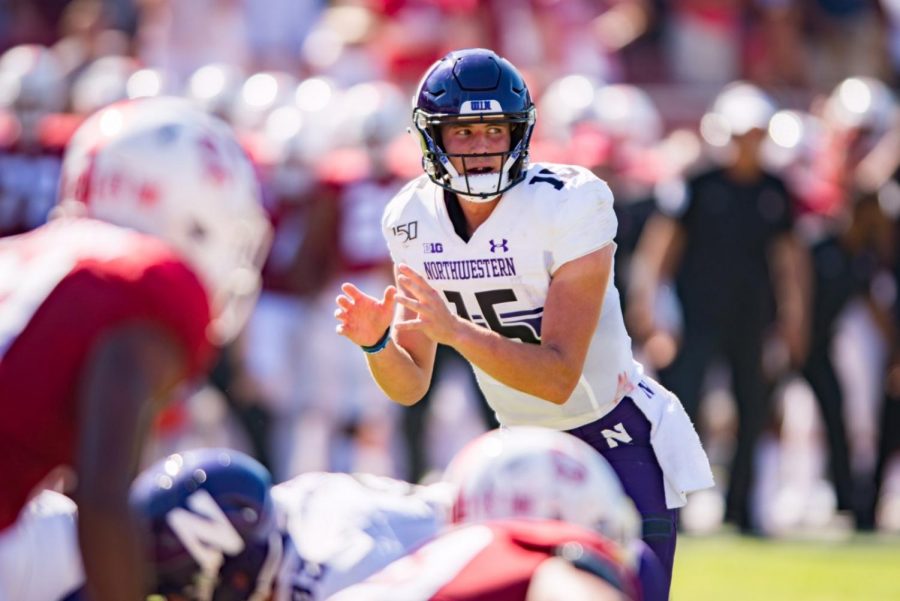 (Daily file photo by Noah Frick-Alofs). Hunter Johnson waits for the snap. The sophomore quarterback wants to play through a right knee injury.

Hunter Johnson just wanted to run back to the huddle, but he couldn’t do it. After taking a late hit in the third quarter of Saturday’s game at Indiana, Johnson was desperate to stay in the game. But he couldn’t get off the ground.

Johnson stood up and started moving his feet, heading towards the middle of the field. Before he could take two steps, he collapsed back down. He tried to walk another time, but when he put pressure on his right knee it buckled and gave out like a flat tire. He fell face first onto the turf. Finally, Johnson conceded defeat, and the medical staff ran over and carried him off the field.

It’s been a long season for the sophomore quarterback who can’t seem to catch a break. Johnson has dealt with this knee injury since the Wisconsin game on Sept. 28, and it won’t go away.

“I landed on my knee again, and it just shot up a little bit,” Johnson told The Daily after practice Tuesday. “I’ve been dealing with it all year and reaggravated it. It calmed down after a little while, and I’ve been doing treatments throughout the week, just trying to take care of it.”

“It’s not going to be perfect for the remainder of the season, but I’ve just got to take care of it.”

Ironically, Johnson was re-injured on a play where he was trying to throw the ball down the field. The Wildcats haven’t completed a pass longer than 25 yards since their lone win against UNLV in September, but Johnson really wanted to go for it on this first-and-ten play.

On a play-action pass, he kept his eyes on receivers Jace James and Ramaud Chiaokhiao-Bowman on the right side of the field and scrambled outside the pocket to buy them more time to get open. But they didn’t, the pocket closed and Johnson said he was “slammed” after the whistle by a 246-pound defensive lineman, Allen Stallings IV.

Coach Pat Fitzgerald said Monday Johnson is day-to-day. Ideally, Johnson would be splitting reps evenly with junior quarterback Aidan Smith in practice, but because of the knee injury, Johnson has been limited this week.

Coming into last Saturday’s game, Fitzgerald planned for Smith and Johnson to each get a few drives in the first half. Smith started the game and ran for 22 yards on his first play before fumbling the ball over to the Hoosiers. Smith said Tuesday he was certain he was down before the ball came out, but there wasn’t conclusive evidence on the video replay to overturn the call on the field.

On his next drive, Smith led NU on a 15-play, 58-yard field goal drive, which included four completions from the junior quarterback. Then on his third series of the game, Smith made a crucial mistake. Offensive coordinator Mick McCall called for a run-pass option, so after he snapped the ball Smith had to decide whether he would hand the ball off to freshman running back Drake Anderson or throw a bubble screen to junior receiver Riley Lees.

Smith said he made the wrong choice –– he handed it off to Anderson, who almost immediately was tackled and fumbled the ball. After that misstep by Smith, Johnson subbed into the game.

“Obviously, I want that first play back, and I thought I was down,” Smith said. “Other than that, that second drive we went down and got some points. There was only that one other poor decision that I had.”

When Johnson came in, he made his first appearance since he first hurt his knee against the Badgers. He missed the next game, at Nebraska, because of that injury, but he was at full strength for the Cats’ Friday night game against Ohio State. Johnson missed that one and the next week’s game against Iowa as he dealt with a family situation.

His mother, Shana, was undergoing chemotherapy for breast cancer, and Fitzgerald met with Johnson and told him to focus on her recovery. Fitzgerald made Johnson temporarily unavailable, and Smith knew he’d play the entire competitive portion of the games against Ohio State and Iowa. In the last week, Shana has made great progress, and Johnson can turn his full attention back to football.

“She’s through the big bulk of it right now, and she’s feeling great,” Johnson said. “She’s a superhero, and she’s doing awesome.”

But Johnson’s return to the quarterback position wasn’t a heroic comeback story. He threw for only 65 yards on six drives, and his night ended when he reaggravated his right knee. Smith came back in after that, but the offense gained 21 yards and one first down in the last 20 minutes of the game.

Fitzgerald said the quarterback position is the area this team needs to improve the most. Johnson and Smith have only thrown two touchdowns all season, and the team hasn’t crossed the goal line in four games. Johnson said he agrees that whoever is in at that position needs to play better.

“We’ve got to finish drives,” Johnson said. “We have so many plays there to be made, plays that we’re just not finishing. We’re getting to third down and we’re just not converting. We got to convert those third downs.”

Now ten weeks into the season, the quarterback competition between Smith and Johnson has no end in sight. Johnson said he is attacking his rehab so he can be back in the mix Saturday against Purdue, and he hopes to get more snaps this week against a school he seriously considered transferring to after he decided to leave Clemson.

Smith is also expecting to play. Neither quarterback has emerged as the better option going forward, so the plan for now is for Smith and Johnson to continue to split time at that position.

“Week to week, we’ve both been preparing to be the guy,” Smith said. “The coaches have always told both of us they just want us to both be ready.”