Football: Adetomiwa Adebawore is the Next Man Up 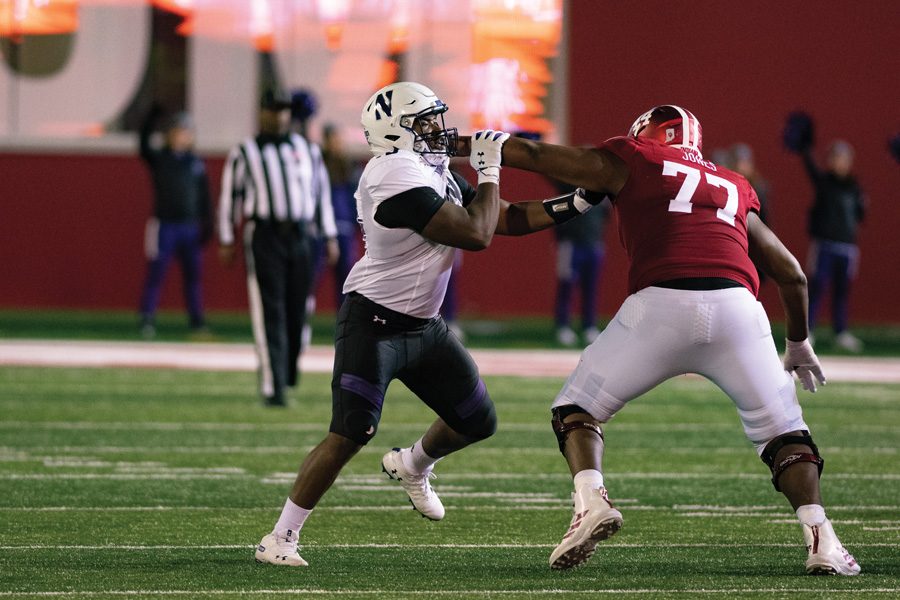 Adetomiwa Adebawore tries to get past a block. The freshman defensive lineman will make his first career start on Saturday.

For years, Northwestern’s defensive line has consistently been its deepest and most consistent position group.

Coach Marty Long’s unit has produced Ifeadi Odenigbo, Dean Lowry, Tyler Lancaster and a host of other NFL players in the past few seasons. Joe Gaziano, now the anchor of NU’s defensive front, will be playing on Sundays next year.

But the line’s success isn’t just about the stars. Even when guys go down, it seems like someone is always ready to take their place and play at a high level. With injuries to Samdup Miller and Earnest Brown IV, the newest member of NU’s starting defense is true freshman Adetomiwa Adebawore.

“He’s just continuing to learn,” Long said. “Physically, he has the strength and everything like that. We just have to continue to teach him the fundamentals of the game.”

Long said it isn’t necessarily that rare for true freshmen to earn a starting spot, mentioning two former standouts — Lowry, now a starter for the Green Bay Packers, and Jordan Thompson — as examples of players who’ve done it in the past. If Adebawore turns out as well as those guys, the Cats will be set at defensive end for years to come.

Adebawore was a three-star recruit and chose NU over Washington State, Yale and Navy, among others. He said he didn’t expect to be playing this kind of a role this soon, especially because he could still redshirt and keep a year of eligibility. Players can redshirt if they play four or fewer games in a season, and Adebawore has played in four so far this year.

Coach Pat Fitzgerald said he’s been impressed with Adebawore since he joined the program.

“He’s got great power, he’s got really good get off and he uses his hands well, plays with a base,” he said. “He’s just gonna continue to get stronger and stronger. He has got a very bright future here in our program.”

As the Cats have struggled to a 1-7 start, the mood has naturally started to shift toward the future of the program. Adebawore could be a major part of that, especially if he cements himself as a defensive line stalwart while he gets the extended playing time.

Junior defensive tackle Jake Saunders — another guy who’s earned more playing time due to injuries and also recorded his first career sack against the Hoosiers — has also been impressed with Adebawore’s development.

“Tommy’s been great,” Saunders said. “He’s been full of questions anytime he’s unsure of something, even on the sideline. No hesitation to ask. On top of that, he’s super strong, super athletic. He’s got a really bright future… he’s been huge.”