Gutierrez: The First Amendment is misrepresented 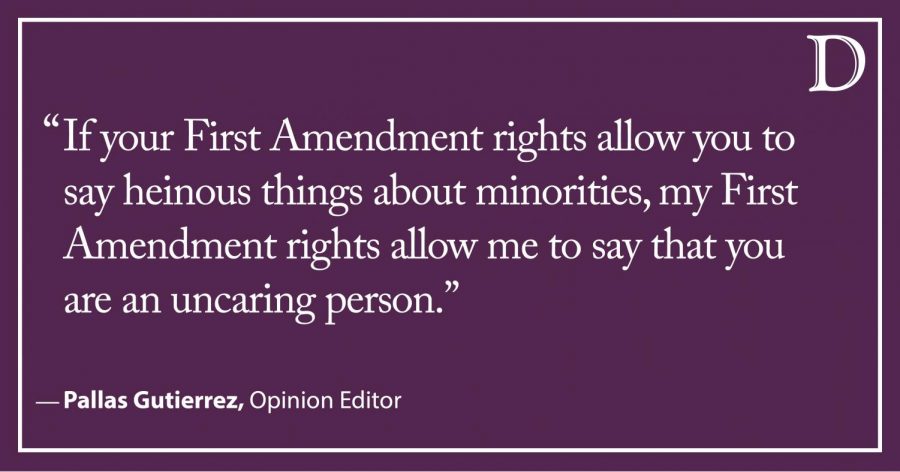 Congress shall make no law respecting an establishment of religion, or prohibiting the free exercise thereof; or abridging the freedom of speech, or of the press; or the right of the people peaceably to assemble, and to petition the government for a redress of grievances.

Above is the entire text of the First Amendment to the United States Constitution. It was added to the Constitution as part of the Bill of Rights in 1791, in order to secure the rights of the people, rather than set up the new nation’s government.

The First Amendment — the right to free speech, free assembly and freedom of the press — hangs in The Daily’s newsroom. However, I have seen this amendment interpreted incorrectly, especially in recent years.

Not all speech is covered by free speech. Some speech is unprotected by the First Amendment and may be entirely prohibited. As of 2014, there are three unprotected categories: obscenity, child pornography and “fighting words” or “true threats.” Of these three, obscenity is the most controversial, as it was denied First Amendment protection without consideration for harm done. In U.S. v. Stevens, the Supreme Court implied that they are unlikely to add additional unprotected categories, but that it’s possible that they will in future cases.

Outside of unprotected speech, there are still restrictions on free speech. Prior restraint is one method of restriction, and it takes two forms. A law can require that speech be submitted to a body for a license to distribute it, such as movies, or a court can issue a temporary restraining order against specific forms of speech, such as publishing the Pentagon Papers.

Free speech has also been limited when it threatens one’s safety. In numerous protests outside women’s health or abortion clinics, the Supreme Court found that entrances must have a certain buffer zone to allow clinic patients and workers to safely access the services.

Clearly, the First Amendment has its limits. Still, some people use the First Amendment as a defense from people expressing opposing opinions, usually in the form of protest. As recently as this Tuesday, when Jeff Sessions came to campus, some students argued that protests against Sessions’s presence were impinging on the free speech of other students. However, this is not what the First Amendment means. The First Amendment exists to protect the American people from the government, specifically Congress.

The First Amendment does not protect people from private businesses. This is why companies can restrict what employees say at work, such as when James Damore lost his job was for opposing the company’s diversity initiatives by arguing for biological differences between men and women.

The First Amendment does not exist to protect people from other individuals. If someone expresses an opinion, whether it be about the government or their favorite tv show, that person is protected from retribution by the federal government, but another individual is free to disagree and debate.

The only limit on individual speech that can be tried by another individual is libel. Libel refers specifically to facts that can be proved untrue. Libel laws do not penalize true statements that damage reputations, and it is much harder to apply libel laws to public figures, such as celebrities or politicians.

The Constitution exists to protect us from potential government overreach. It is not a social contract that impacts how we interact with one another. Core beliefs and the way people choose to express them are an elemental part of how people choose friends and collaborators To imply that the First Amendment means speech has no consequences is irresponsible and simply not what the Bill of Rights exists to do.

Pallas Gutierrez is a Communication sophomore. They can be contacted at [email protected] If you would like to respond publicly to this op-ed, send a Letter to the Editor to [email protected] The views expressed in this piece do not necessarily reflect the views of all staff members of The Daily Northwestern.