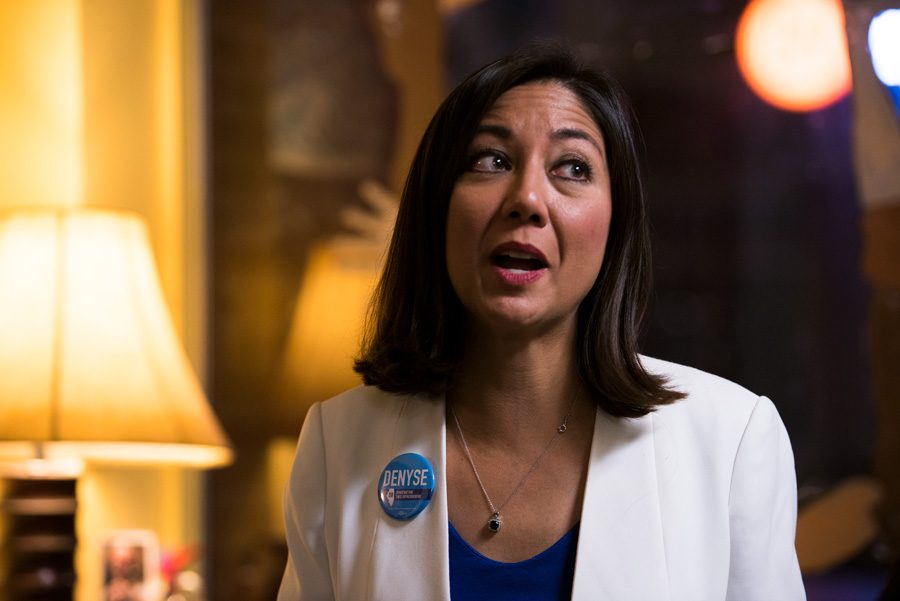 Denyse Wang Stoneback speaks to attendees of Wednesday’s fundraising event at Curt’s Cafe. Stoneback is running for State Representative in the 16th district, focusing on gun control and reproductive rights.

The gathering, held at Curt’s Cafe, 2922 Central St., was an opportunity for community members to learn about state Rep. Lindsey LaPointe (D-Chicago) and Denyse Wang Stoneback, both first-time candidates running for the Illinois State House. First, they have to win their primaries in March.

Biss first introduced LaPointe, who is the current representative of the 19th district — the first woman to hold the seat. She was appointed to the position in July and since then has signed onto 45 bills. Next week, she’ll start work on the Mental Health Committee in Springfield.

With a background in social work, LaPointe said she’s ready to continue to “press the gas pedal” and fight for reproductive freedoms, affordable housing and a graduated state income tax. Above everything else, she said she’s “most interested in getting things done.”

LaPointe is running against four Democratic opponents in the primary. She said politically, she’s the furthest left of the four.

Stoneback served as an educational publisher for 20 years until the 2012 shooting at Sandy Hook Elementary School. She said the shooting left her floored, as legislators failed to stand up to the National Rifle Association by passing gun control policy. She then founded the nonprofit People for a Safer Society, through which she has advocated for gun policy reform in Springfield,Evanston and Skokie. Now, she’s running to be state representative of the 16th district.

Along with gun reform, Stoneback said she supports the Fair Tax, a proposal she said would generate $3.4 billion in revenue for Illinois and take the burden off the lower 20 percent of income earners.

While both of these candidates are running in competitive primaries, Biss said these races are an opportunity to elect “remarkable” people amid corruption and machine politics in Illinois government. One attendee raised concerns about the speaker of the State House Speaker Mike Madigan’s powerful influence over legislators.

“That’s where people like us supporting candidates like these really matters,” Biss said. “Not just because they’re good and brilliant people, but because when they get to Springfield on the backs of our support, they don’t owe (Madigan) anything.”

“Here in Evanston, we’re always looking for ways to spread the progressive goodwill, and so I think it is important for both us to extend our network out of our own districts,” Ruttenberg said, “but then also for candidates to be able to access individuals in Evanston.”

Attendee Andrew Rowlas came from Chicago to support Stoneback. A new volunteer to her campaign, he said he’s not happy with the incumbent in the 16th district, state Rep. Yehiel Kalish (D-Chicago), because Kalish is not “encompassing enough of what the community represents.”

Rowlas said Stoneback is a progressive candidate who will fight for issues like gun control. Stoneback called attendees to action, saying “we all must do everything that we can to affect the change that we believe must happen, and not just on guns but on every other issue.”

Biss concluded the event,urging attendees to donate and volunteer for the candidates. He emphasized how in tight elections, even one mailer sent by an opponent could decide the primary.

“I just want you all to think about Illinois government run by people like this,” Biss said. “You wouldn’t feel the frustration you now feel reading the paper if people like this are in charge of Springfield. We can make it happen.”