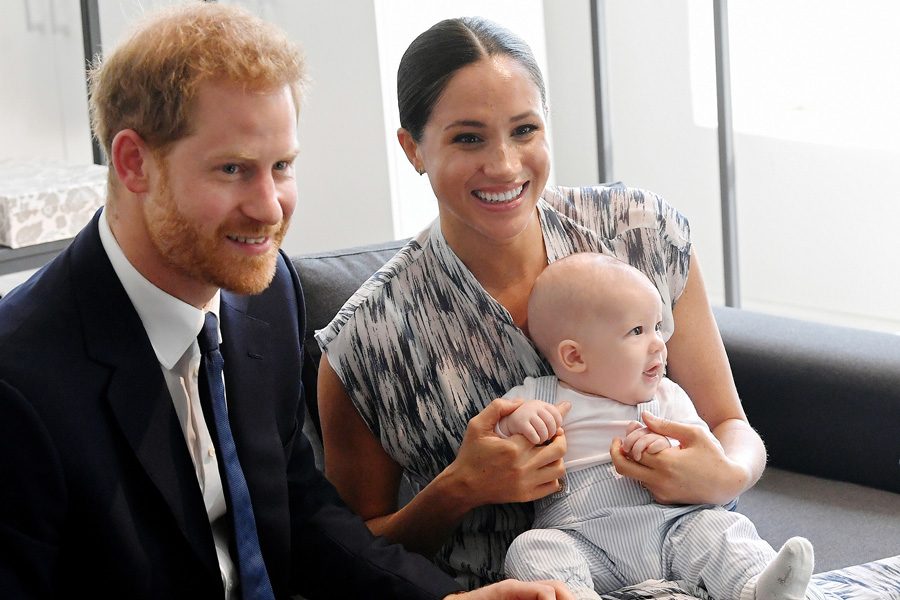 Prince Harry, Duke of Sussex, Meghan, Duchess of Sussex and their baby son, Archie Mountbatten-Windsor, during their royal tour of South Africa in September 2019.

A prince, a future duke, a bundle of joy, a symbol of change, a cultural icon and an honorary Wildcat.

All these are some of the ways people have described Archie “Bubba” Harrison Mountbatten-Windsor, the baby boy of Prince Harry and Northwestern alumna Meghan Markle, the Duke and Duchess of Sussex.

Born six months ago on May 6, Archie is seventh in line for the British royal throne. He is one of the few royals with both American and British blood and the first royal baby with black heritage.

Although the Duke and Duchess have mostly kept their son outside of the limelight, in the six months since his birth, he has developed his fair share of memorable public moments. Here is a rundown of Archie Harrison six months later.

Archie was born on 5:26 a.m., British Summer Time, on May 6 at Portland Hospital in London. At time of birth, Archie weighed seven pounds and three ounces. Unlike other royal babies, Archie, then unnamed, did not make a public appearance immediately after birth — instead, Harry opted to make a public appearance at Windsor Castle while his wife recovered from labor.

“This little thing is absolutely to die for, so I’m just over the moon,” Prince Harry said. “It’s been the most amazing experience I could ever possibly imagine. How any woman does what they do is beyond comprehension but we’re both absolutely thrilled and so grateful to all the lovely support.”

The new family made their public debut two days later at Windsor Castle. Archie was wrapped in a white blanket, with a white beanie on his head, matching Meghan’s white dress. The shoot received praise for how Meghan did not hide her post-pregnancy bump.

Immediately after the appearance, Meghan and Harry announced their son’s name, Archie Harrison, on Instagram. The unconventional name of Archie — in addition to inspiring a number of “Riverdale” memes — took Royal Family followers by surprise, as many speculated the name would be one of a former monarch or iconic royal family figure.

Archie is traditionally a nickname for men and boys named “Archibald,” a Scottish title associated with boldness and genuinity. Harrison is an English surname meaning son of Harry, a potential reference to Archie’s father, Prince Harry.

Two months after birth, Archie was baptized at Windsor Castle by Justin Welby, the Archbishop of Canterbury. The July 6 ceremony was conducted in private, and the Duchess and her husband released only two photos from the event: a family portrait and a black and white photo of the couple with their baby. During his baptism, Archie wore the same christening gown as his cousins from his father’s side, Prince George, Prince Louis and Princess Charlotte.

Archie made his most notable public appearance during Meghan and Harry’s recent South African charity tour in September 2019. During the trip, many photos were snapped of the infant, who reached a newfound level of visibility to the public.

On Sept. 25, the family made an appearance at Cape Town with Archbishop Desmond Tutu. The royals posted a video of their visit, which included footage of Tutu and the infant high-fiving.

According to royal correspondents at the event, both Meghan and Harry referred to their son by personal nicknames. Meghan called Archie “Bubba” several times during the meeting, while Harry referred to his son as “Arch.”

On Oct. 23, British channel ITV aired a documentary of Meghan and Harry’s trip: “Harry & Meghan: An African Journey.” During the documentary, Meghan and Harry revealed that their son had always been a happy child, but his time during their African charity tour were the happiest moments of his young life.

“He clearly loves Africa as well because he’s been happy looking out the window,” Harry said. “He found his voice here. He was bouncing up and down and making more noise than he’s ever made before.”