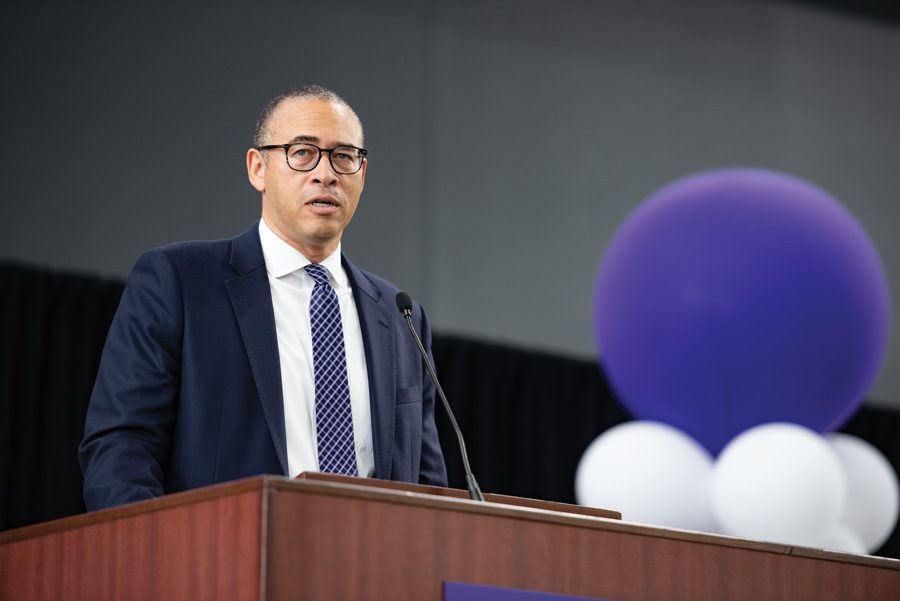 In mid-October, members of The Daily’s editorial board sat down with Provost Jonathan Holloway for an interview. Jeri Ward, the vice president for global marketing and communications, also sat in on the meeting. His answers to these questions have been edited for clarity and brevity.

The Daily: When it comes to diversity and inclusion among undergraduates, what gaps or areas for improvement do you hope Northwestern focuses more on (or continues to focus on)? Any other priorities in the next decade we haven’t touched on?

Holloway: If we claim to be a world class university that engages the world, we better have the world here. If we’re going to be leading national university, we need to have the complexity of our national demography — gender and sexuality, race or religion — whatever it is needs to be here also. The Faculty Pathways program has, at different moments along the way, a very clear commitment to that kind of enterprise.

On the diversity on the undergraduate side of things, we’ve just launched the Undergraduate Student Lifecycle project moving into its implementation phase. That group that did this amazing work for a year and really came forward with a lot of concrete recommendations related to first-generation low-income, underrepresented minority group students and marginalized students.

You’re going to start seeing — starting around spring semester — some things starting to get implemented. That will pick up pace as we move forward over the next few years. (The changes) are collectively about recognizing the excellence that is everywhere. We’ve done a really great job — Chris Watson and his team over at admissions — we know how to find talent, and we now know how to package the resources to recruit talent to come here on the graduate level.

But… diversifying is not our challenge at the undergraduate level. Yeah, we can do better here and there, of course we can, but it’s about making the undergraduate experience inclusive so that our students can thrive. Because these things are interwoven. Our commitment is real. I would love to say that we can make it a dollars-and-cents commitment and put a number name on it. I’m just making it up, $50 million of the next five years to diversify our faculty to do these kinds of programs. But as we’re coming out of the financial challenges, we just aren’t in a resource place to do it. What we’re really trying to deal with is changing culture and climate, which isn’t necessarily expensive, but it’s exquisitely difficult. If we don’t have an implementation plan about how to do it, then we know it’s just not going to happen. I’d hope in the next couple of years, we can put a dollar figure on it.

The Daily: According to the 2018 D&I report, in almost all undergrad and graduate schools, more than 70-80 percent of tenure-line faculty is white. That issue shows up in different ways in different schools. Medill, for example, has had few Latinx professors and few spanish-speaking faculty members for years. What’s Northwestern doing to improve that across schools?

Holloway: There was a two hour session about search committees that my office hosted. What was really exciting to me is that this was not mandatory meeting, but it was full. We just hadn’t had that kind of turnout in the past. The challenge in an equity rep is finding a member of the faculty in that specific department, who, done properly, has training on unconscious bias and things like that. The pool for his position is cultivated. The fact that we did not have a free seat in the room for a two hour seminar session on this topic tells me that faculty really are interested and they want to know — they want to be proactive in all of this — they aren’t happy about this either. So the challenge in that is we’re talking about culture change, too.

But I’ll tell you, if we didn’t have 60 people in the room, if we had like a quarter full room of people that are sort of feel like they’re begrudgingly, I’d feel a much different way than I do today, having seen that full room and people leaning in and wanting to learn more. So I’m cautiously optimistic that there is a heightened awareness about these things.

I don’t recall them specifically. But in the 275 people who received a PhD in math from the AU Top 64 universities in North America, only 16 were from underrepresented minority groups. So there’s an area where the pool is tight. And so for math here, say we want to develop a program to get more undergraduates, post-baccalaureate students — to get them excited, generate interest and get them into the pipeline. That’s a long term solution, but if we don’t do that now, it’s like planting a tree, we have no chance. So in some areas, there’s a real pipeline issue. Other areas, there is a lack of faculty maturity in terms of awareness on the issue. Other areas, there might be some structural resistance. So it kind of depends on where it is that has to be addressed. But I’m certainly committed to doing the work of culture change.

The Daily: Last April, you mentioned that Jabbar Bennett had commissioned external consultants to spend six to nine months talking to people throughout the University to understand what NU’s commitment to D&I looks like, resulting in a report. What’d that report show?

Holloway: Well, that report came in, I want to say over the summer according to my best recollection. It was a helpful diagnostic. The main thing it shows is that we as an institution, we provide the community much greater clarity about the respective missions of those offices, diversity and inclusion and equity in a number of places. So (I told) my staff to do a study, of not just the best practices, but the best organizational practice. And we looked at nine different peer schools, and we came back with seven different models — that’s not helpful at all. And I actually called a number of provosts that are in schools that we that are very much like us, hoping then I’ll get a consistent answer. … The fact is, all of us, Provost universities are trying to sort out the right organizational model for these issues to create an infrastructure to support the different ideas. There is no single path forward.

I was talking with Jabbar earlier this week about that very fact, and he is going to be rolling out plans with his team later this fall, but certainly by winter term and spring term with the goal of by the end of this academic year to have some very clear next step plans for how we are going to do our best work or how we can build an infrastructure to support the agenda that we do share about trying to improve the quality of life, being an inclusive atmosphere, as it relates to diversity and inclusive issues.