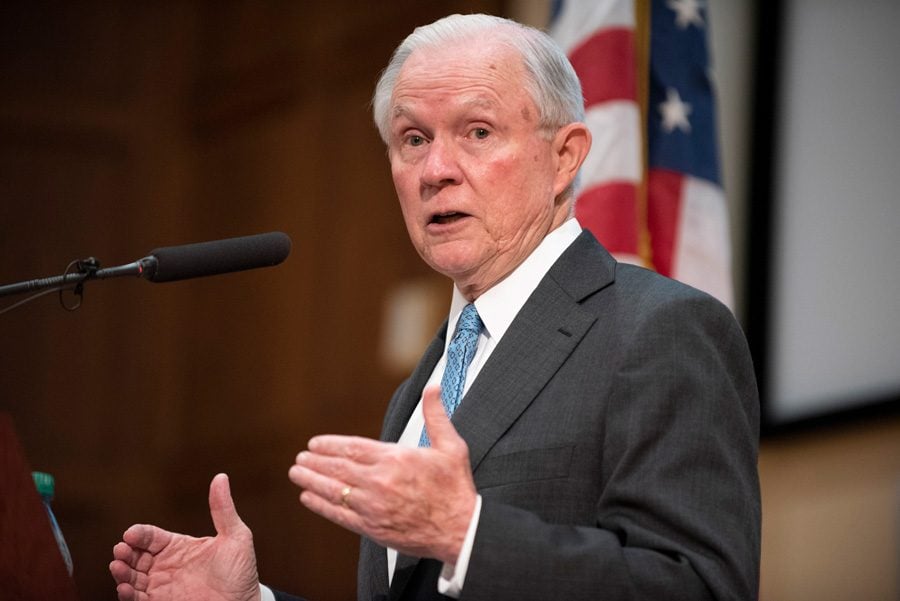 Former U.S. Attorney General Jeff Sessions has championed students’ rights to free speech on college campuses throughout the country. On Tuesday, he spoke against the students protesting a talk he gave at Lutkin Hall on Tuesday, criticizing what he called their “stupidity” and adding that Northwestern should not tolerate such behavior.

“I’m just going to tell you, this is stupid,” Sessions remarked as students pounded on the door to the auditorium and recited phrases like “F–k Jeff Sessions” and “You are a racist, you put kids in cages.”

“They can have a right to do it, OK, but at some point I have to speak,” added the former Republican U.S. Senator from Alabama. ”You shouldn’t be blaming young Republicans for meticulously defending their beliefs and putting up with this kind of trash.”

Sessions, who was Northwestern University College Republicans’ fall speaker, was invited to discuss “the real meaning of the ‘Trump Agenda’” in a free event open to the public. Throughout his frequently disrupted speech, he spoke about several issues he thought influenced President Donald Trump’s election in 2016, including immigration, trade and foreign policy.

Sessions attributed wage stagnation — which he considered one of the largest issues among middle-class Americans — and a lack of available jobs to the influx of undocumented immigrants under previous administrations.

He said Trump is right to support a merit-based system of immigration over a family-based system as well as a border wall, as he said both of those policies would economically and socially serve “the interests of Americans.”

“As a prosecutor in the federal system for 15 years, as an assistant U.S. attorney and 12 years as U.S. attorney, I think this issue is open and shut to me — you don’t get to come into the country illegally,” Sessions said. “If you come illegally and burrow in somewhere and commit another crime, there is a bipartisan consensus that they should be deported.”

Sessions also connected the lack of jobs to participation in trade agreements the U.S. joined before Trump took office. Sessions said he opposed the Trans-Pacific Partnership, a free trade deal between the U.S. and other countries in the Asia-Pacific region, because the interest of the U.S. should be to have trade agreements that are bilateral instead of multilateral.

“Many of you will graduate and find it difficult to find a job,” Sessions said. “We need to protect American business. China is cheating us every day.”

Despite criticism from the president throughout his tenure as attorney general — which lasted from February 2017 to November 2018 — Sessions spoke fondly of the Trump administration’s actions over the past two years. He was fired by the president after recusing himself from the Justice Department’s investigation into Russian interference in the 2016 election.

“I had never watched (Trump’s) program on TV, I didn’t know how many people he’d fired — maybe I’d have been more careful,” Sessions said. “The president is allowed to fire you, but fortunately he doesn’t get to shoot you.”

The former U.S. attorney general also criticized Chicago’s status as a sanctuary city for undocumented immigrants, as he said it allows individuals to come to the city “illegally” to “deal dope” and avoid deportation — though little evidence exists to support those claims.

Sessions also warned against listening to the “anti-police left,” claiming the end of “stop and frisk” policies — a practice that studies show disproportionately targets black pedestrians — amongst the Chicago Police Department led to a spike in homicides.

Attendees were able to submit questions via notecard for the Q&A after Sessions’ speech, which was moderated by NUCR vice president and former Daily columnist Dominic Bayer. The first question related to the current impeachment inquiry into Trump, asking if the former lawyer believed whistleblowers should be open to cross-examination.

“Whistleblowers have certain protections, no doubt about it,” Sessions said. “But if they have a right to testify and don’t testify, the impact of their charges and complaints is greatly diminished.”

Bayer then asked Sessions for his opinion on Trump’s withdrawal of troops from Syria and whether it posed a threat to foreign or national security.

Sessions said it’s possible there was no way to justify the U.S.’s military presence in Syria any longer, especially when opposed by “hard-headed” and “aggressive” Turkish forces that were “excessively paranoid” of Kurdish troops.

“What would you do?” Sessions said. “You going to drop bombs on Turkey? Turkey didn’t want to be stopped.”

Sessions’ answers were interrupted by numerous rebuttals from crowd members, including requests that Bayer “stop censoring the questions” and that the former U.S. attorney general address the legalization of marijuana. Bayer then asked about Sessions’ opinion on Illinois legalizing recreational use of the drug in January.

“I don’t think the country’s better off with more people using pot,” Sessions responded. “‘Big Marijuana’ is a lying bunch of skunks… This is not medicine.”

SESP freshman Joshua Bloom was one of the people in the crowd who interjected, shouting “false” to Session’s assertion that the Trump administration had not rolled back protections for LGBTQ Americans and that Trump had not committed an impeachable offense by asking foreign countries to investigate his political rivals.

Bloom said he interjected because he felt the questions were not addressing the concerns of the Northwestern student body.

“The questions were like slam dunks for him… they were just trying to make Jeff Sessions look good,” Bloom said. “Also, his rhetoric I found very disturbing as an American citizen. It didn’t represent my values, and it didn’t represent America’s values. He talked about immigrants being harmful and detrimental to our society, when in reality they built this nation.”

Some of Sessions’ remarks received strong applause from the audience throughout his talk, including his recognition of a police officer for serving in Afghanistan and Iraq.

Members of a support group from Northwestern’s Division of Student Affairs were present in anticipation of tensions surrounding the event — an official “Night of Action” was planned to occur at the same time.

Julie Payne-Kirchmeier, interim vice president of student affairs, said the group worked with organizers from NUCR and the “Night of Action” to ensure student safety and coordinate security.

“For me, this is a University, and we value academic freedom, and we value creating an environment where we are listening and engaging and understanding different points of view,” Payne-Kirchmeier said.

Medill freshman Margaret Fleming said she came to hear Sessions speak because she thought it would be interesting to hear a former Cabinet members’ experiences and political viewpoints, even though she does not support his views.

While she was satisfied that Sessions was able to answer a question she had on bipartisan policy, Fleming noted that the difference between the tone surrounding this event and former Georgia gubernatorial candidate Stacey Abrams’ talk, sponsored by Northwestern University College Democrats, earlier this quarter was unsettling.

“It’s hard because the people who I hold the same political views with are the ones protesting,” Fleming said. “But at the same time, I think I know that if somebody had done this at Stacey Abrams, if people had been screaming and breaking windows and doing things like that, it would have been completely horrible, and I would’ve blown up about it in the very opposite way.”

NUCR was unavailable for comment at the time of publication.