Volleyball: The Wildcats looks to beat No. 7 Nebraska in a hostile environment 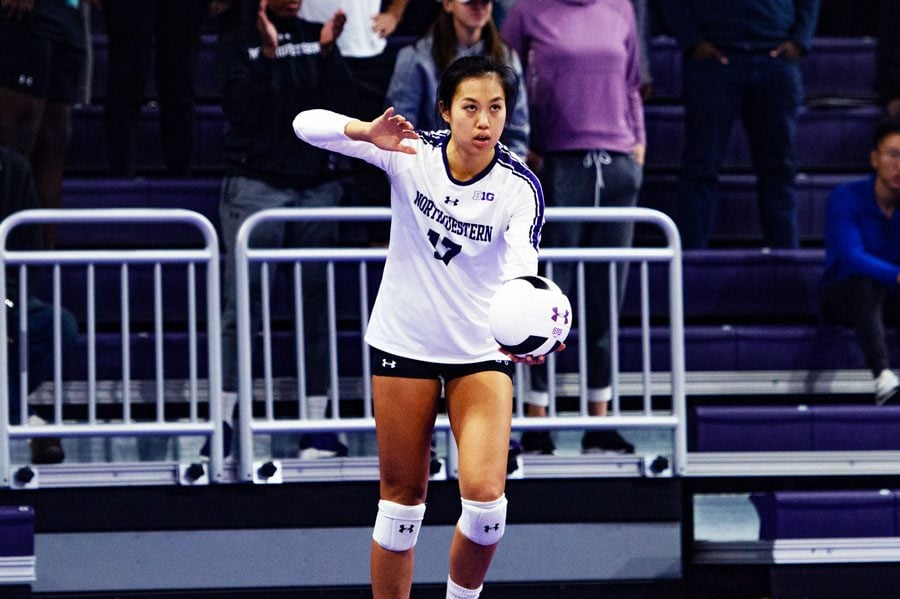 Peyton Chang prepares to hit the ball. The graduate server had 47 assists in the Cats last game against Michigan.

Northwestern has lost in five sets in three of its last four matches. On Wednesday, however, a five-set loss would be a welcomed improvement.

The Wildcats will travel to Lincoln, Neb. to take on No. 7 Nebraska, a team that swept NU earlier this season. Even winning one set against the Cornhuskers would be a breakthrough, as the Cats have yet to win a set against a ranked opponent this year.

NU (10-14, 1-11 Big Ten) has struggled in Big Ten play, dropping its first 10 conference matches, including a loss to Rutgers, a team that is 3-109 all-time against Big Ten opponents. But the Cats picked up their first win in a sweep of Michigan State on Friday, before dropping a grueling five-set match against Michigan on Saturday.

Nebraska (18-3, 10-2), on the other hand, has consistently been one of the top teams in the country, most recently beating then-No. 7 Penn State on Saturday. The Cornhuskers are 14-1 all-time against NU, winning 10 straight games, including seven straight sweeps.

In addition to their historical struggles, the Cats are also dealing with injury troubles this season. Freshman outside hitter Temi Thomas-Ailara, who leads the Big Ten in kills per set, has missed the last two matches with an injury. Her status moving forward is unknown.

“She’s kind of day-to-day, but not good enough to be in there yet,” coach Shane Davis said. “We hope to get her back as soon as we can.”

In Thomas-Ailara’s absence, NU has been led by junior outside hitter Nia Robinson, who recorded double-digit kills in both matches last weekend. She ranks 13th in the conference in kills per set.

When the Cats faced off against Nebraska earlier this season, NU looked competitive, taking late leads in the first and third sets despite losing all three sets. As usual, the Cats were led by Thomas-Ailara, who finished the match with 16 kills and seven digs.

NU will have to adjust to playing in Lincoln’s hostile environment. While the Cats only average 702 fans per game, Nebraska leads the conference with an average attendance of 8,198 fans. Fan involvement has been instrumental for the Cornhuskers, as they enter the match with an 11-2 home record.

With eight games remaining this season, NU isn’t technically eliminated from NCAA tournament contention. However, they’ll need to drastically improve over the next few weeks to have a chance, as they’ll face four ranked opponents, including two games against top-ten squads.

Graduate setter Payton Chang, who recorded 47 assists against Michigan, said the team is focused on “getting one percent better every day.”

“Consistency is the main thing we’ve been working on,” Chang said. “We’re just working on getting better every day. I’m excited to see what the future holds.”