Goldsmith: This is the year for Northwestern to break into the Big Dance 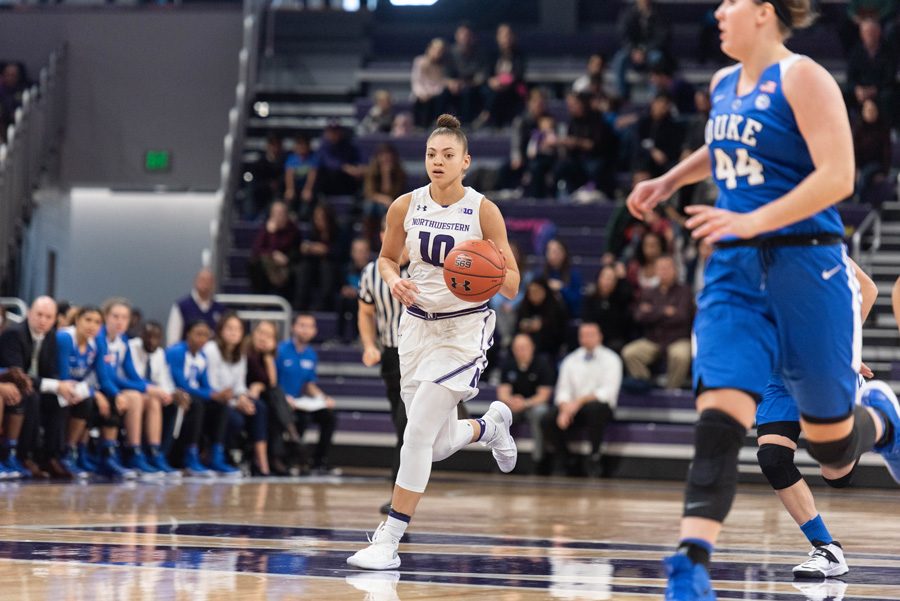 Lindsey Pulliam dribbles the ball. The junior guard will look to be an experienced leader this year as she tries to lead the Cats back to the tournament.

Two years ago, after losing one of the best senior classes in program history, McKeown rolled into his season opener with two unabashed freshman guards and a group of wings with no college experience. He watched forward Abi Scheid shoot 3-for-10 from the field in a 15-point loss to Chattanooga. He watched guards Lindsey Pulliam and Jordan Hamilton miss 16 shots combined in another loss against Milwaukee.

That’s all in the past. Freshmen eventually become upperclassmen, and these players have gotten better every step of the way. Pulliam and Hamilton, two juniors, senior forward Abi Scheid and sophomore guard Veronica Burton have almost as much experience as a professor with tenure. Now, there’s no reason why they can’t lead Northwestern to the NCAA Tournament.

But there were signs that a bright future was on the horizon. Puliam scored 19 points in a three-point conference loss to No. 14 Maryland in January. It was the first time she performed so well against a top team –– before she became an all-Big Ten player –– and McKeown said he saw that game as a step in the right direction.

“I told our players, ‘That’s why you came to the Big Ten,” McKeown said after that game. “We just had opportunities in the fourth quarter with the game tied where we just couldn’t get a stop.”

Then last season, NU leveled up. The Cats finished 9-9 against Big Ten competition and beat three ranked teams. In the postseason, NU advanced to the WNIT Finals with Pulliam torching opponents along the way, averaging over 16 points per game in the postseason.

All of it –– from blowout losses in 2017 to the WNIT run last March –– has been leading up to this. Every player projected to be in the rotation has been thrown into the fire before and survived, putting up impressive numbers in the process.

NU should win 20 or more regular season games this year. This cast of players fared well against highly ranked teams even when they were all untested. Now Pulliam, Hamilton, Burton and Scheid will get to take advantage of the less experienced teams they play.

There isn’t another team in the Big Ten who has relied on the same players for this long. Because almost every NCAA player stays four years in the women’s game, younger players usually have to wait their turn. They move their way up from the end of the bench and then a supporting role before finally getting to run the offense late in their career.

The Cats’ core players have been leading this offense for years now, and they led NU to becoming one of the best scoring teams in the Big Ten last year.

How can you doubt a group with such a track record of being productive and competitive? This group used to be stomped on by conference foes in blowout losses. That part of the journey is over, and a tournament appearance seems likely.

After a long wait, the fun part is about to begin.