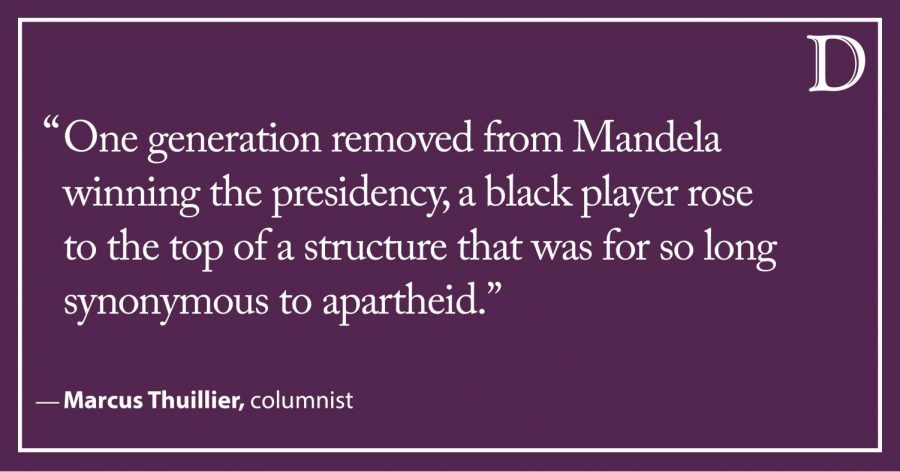 I grew up on rugby. Both my parents and I played the sport at some point in our lives. We’ve watched as many games as we could during the 23 years I have been alive. This past weekend, I woke up at 4 a.m. to watch the Rugby World Cup final. South Africa put in a dominant performance to beat out England for the World Cup trophy.

At first sight, this is an exciting yet unremarkable event. South Africa has now won the tournament three times. New Zealand is the only other team to achieve that. They were the second most fan-favorite team coming into the tournament. However, when the South African captain accepted the trophy, it triggered something really emotional within me.

The captain, Siya Kolisi, is a black man.

Rugby in South Africa has traditionally been — and still is — a sport aimed at Afrikaners: the white descendants of Dutch colonists. When South Africa won the Rugby World Cup for the first time in 1995, they were captained by Francois Pienaar, an Afrikaner. During the victory ceremony, South African president Nelson Mandela walked out and handed him the trophy, an event depicted in the movie “Invictus.” Mandela — symbol of the fight against apartheid — came out wearing the Springbok number six jersey, the same jersey that Pienaar donned during the tournament.

That South African team back then had one black player.

The situation in South Africa 26 years after removing apartheid laws is still dire. This country has had trouble bridging the gap between its white and black populations — which has resulted in making it the most economically unequal country in the world. Success in sports for a country struggling with such a form of inequality is always beneficial. However, this success is heightened by circumstances and the racial component of seeing the first black captain of the South African rugby team lift the trophy.

This victory is even sweeter when the captain wears Mandela’s jersey.

All of this has a point. There have been many think pieces written about seeing representation in movies or films and media. Due to my background, it never affected me seeing people of different skin color being featured more prominently. I recognize the importance of representation, but growing up as a white man in a Western European country, it wasn’t hard for me to find representation in any activity I wanted to try. Sports, politics and media were dominated by people just like me and I never even thought twice about what that really meant.

When I saw Kolisi raising the Webb Ellis Cup this Saturday, I was incredibly moved.

That moment was so powerful, so consequential in that moment in time. One generation removed from Mandela winning the presidency, a black player rose to the top of a structure that was, for so long, synonymous to apartheid. Kolisi is truly a leader for black Africans in South Africa.

South African coach Rassie Erasmus seemed to acknowledge the significance of Kolisi’s feat when declaring after the final win that “when you sit down and think about it, there was a stage when Siya didn’t have food to eat and, yes, that is the captain and he led South Africa to hold this cup and that is what Siya is.” Rugby is often called a “sport of hooligans played by gentlemen”. It was invented in England, then spread across the British diaspora to places like South Africa, New Zealand and Australia.

All those teams integrated people of color in rugby except for South Africa.

It is almost indescribable how incredible the accomplishment of this South African team is when looking at the context of history.

I needed to see this happen to really understand what representation means to so many people. Seeing images of townships across South Africa celebrating the South African victory was truly a transcendent moment for me. It is hard for me to truly comprehend what this experience is like for black Africans living there. But by experiencing this in the sport that I love, I was able to connect second-hand with how representation makes this kind of success significant.