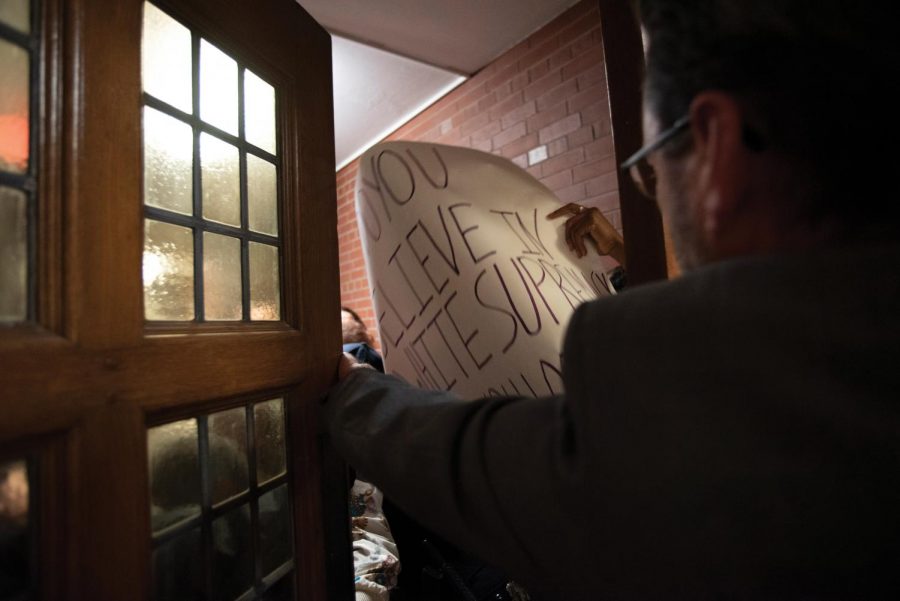 Around 150 protesters, some holding signs reading “No conSessions, No racism, No KKK, No Facist USA” and “SE$$ION$ I$ A TRAITOR,” gathered outside the lecture hall before Sessions was scheduled to speak at 7 p.m., booing and yelling as attendees entered the building. Sessions’ talk, hosted by NUCR, was titled “The Real Meaning of the ‘Trump Agenda.’”

Some protesters chanted “Hey, hey JBS, you got us into this mess” and “I-C-E, KKK, how many kids have you killed today?” while others called attendees “clowns” and urged them to “stop disguising (their) racism as free speech.”

“There’s a difference between having a sustained dialogue and listening to other opinions and accepting hate speech and fascism,” said a student protester, who added they were tackled by police for entering Lutkin through a back door. “That’s the difference with the Trump administration. There are other viewpoints, but when your actions and your words are actively killing and oppressing people, we can’t accept that.”

During Sessions’ nearly two-year-long tenure as attorney general, the Department of Justice enacted immigration policies that resulted in the separation of families at the southern border and the holding of migrants in detention centers for extended time periods. He also repeatedly attempted to block funding to sanctuary cities.

Sessions also rescinded an Obama-era policy that prevented prosecutors from pursuing certain drug-related cases in states where recreational marijuana is legal and encouraged federal prosecutors to seek the death penalty for certain drug-related crimes. He has routinenely threatened protections for LGBTQ+ people, including when he rescinded the Obama administration’s 2016 guidance detailing protections for transgender students under Title IX.

After attendees at his speech finished filing into the lecture hall, protesters moved to the back entrance, attempting to enter the room by climbing through windows and pushing their way through open doors. University Police officers followed the protesters inside, knocking some to the ground and pushing others out. Those who remained inside pounded on side doors to the lecture hall and yelled through cracks in the doors.

Outside, protesters continued to chant, shouting “No justice, no peace, abolish I-C-E.”

One student protester said they entered through a back entrance. As protesters made their way down the hallway and toward the lecture hall, police officers formed a shoulder-to-shoulder wall blocking the Lutkin foyer.

“They grabbed me by my arms and were pushing me backwards,” the protester said. “I got knocked down a couple times and eventually pushed out the side doors. We made it clear that we wanted to be in the space and make our presence known.”

The protest outside Lutkin overlapped with the “Night of Action at Northwestern University,” another demonstration that drew students, Evanston residents and political groups to a parking lot outside the lecture hall. Organizer and Weinberg junior Aishwarya Jois said the event sought to protest NUCR’s decision to bring Sessions to campus, as well as his promotion of racist policies.

Volunteers from Indivisible Evanston, a group that promotes Democratic policies in Evanston, representatives from the presidential campaigns of U.S. Sen. Bernie Sanders (I-Vt.) and U.S. Sen. Elizabeth Warren (D-Mass.), as well as volunteers from Democratic congressional candidate Marie Newman’s campaign attempted to mobilize “Night of Action” attendees for the 2020 election.

After seeing a tweet about the event, Jois was “absolutely appalled” by NUCR’s decision to bring Sessions to campus, who she said has “throughout his entire career oppressed marginalized groups.”

After a friend suggested they protest, Jois created a private Facebook event to form a plan of action. Jois said she imagined a demonstration of 10 to 20 students holding signs and chanting outside Lutkin. But when more than 200 students expressed interest for the event, she decided to open it to the Evanston and Chicago communities, making it public and reaching out to political organizations and local politicians.

The goal of the “Night of Action,” Jois said, was not to disrupt Sessions’ speech on campus or imply he should not be able to present his ideas. Rather, the group sought to draw attention to and protest his policies and beliefs.

“We absolutely in no way, shape or form think Jeff Sessions should not be allowed to come to campus,” Jois said. “We’re saying that we’re surprised that College Republicans chose someone with such terrible views. We’re exercising our rights to free speech and freedom of assembly, just in the same way as they are asserting their rights to free speech by bringing Jeff Sessions.”

In organizing the event, Jois said she “pledged to cooperate with the University.” She added that the “Night of Action” didn’t condone any forms of violent protest. However, as protesters began to mobilize into one group over the course of the evening, it became unclear who was affiliated with “Night of Action,” as opposed to other demonstrators who attended independently.

Some students said in a “Night of Action” Facebook post Tuesday morning that a protest which permits Sessions to speak without disruption but still involves law enforcement alienates marginalized students. Jois responded to the post that the decision to involve police wasn’t “under (her group’s) control, but under the control of Northwestern since the event is on their property.”

Meanwhile, a group of protestors at Lutkin chanted “Hey hey, ho ho, corrupt police have got to go,” expressing their outrage at the police presence.

“We understand that there’s different opinions,” Chin told The Daily before the protest began. “It’s also how you perceive law enforcement. We’re not your typical hometown police department. We’re multi-faceted.”

When the talk ended, some protesters formed a semi-circle, booing as attendees exited through Lutkin’s back entrance.

Cameron Simpson stood a foot away from an NUPD officer guarding the back entrance during the protest. As the officer avoided eye contact with the Weinberg first-year, Simpson led chants condemning the Ku Klux Klan, U.S. Immigration and Customs Enforcement and police officers.

She said protesting on college campuses can lead to valuable change.

“Even though our voices are small individually, when we all fight together, that’s how our voices are heard,” she said. “It’s crucial to do that here.”

Note: This story has been updated to remove a student’s name for privacy reasons.