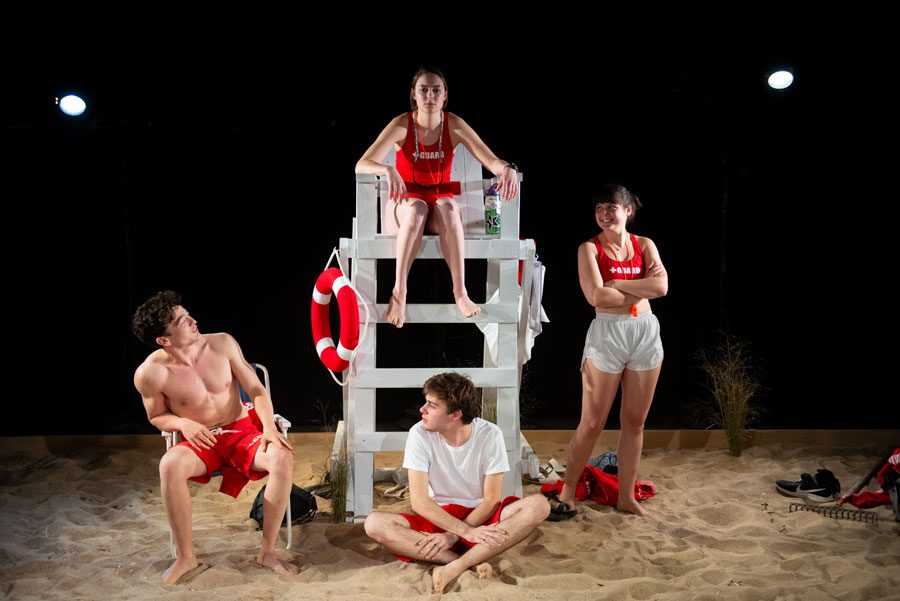 Cast members of “Rip Current Water Entry.” The show opens at Shanley Pavilion on Thursday at 7:30 p.m. and runs through Nov. 9.

Sand: In the words of Anakin Skywalker, it’s coarse, rough, irritating and gets everywhere. And thanks to a forklift and U-Haul truck, Vertigo Productions now has 3,000 pounds of it.

The sand creates the beach setting of “Rip Current Water Entry,” a play that follows four young adults working as lifeguards and grappling with concerns about the future as the summer draws to a close. The show opens at Shanley Pavilion on Thursday at 7:30 p.m. and runs through Nov. 9.

According to Communication senior and show writer Dora Grossman-Weir, towns with wealthy tourist populations offer an interesting opportunity to explore class dynamics. While two of the lifeguards in the play work at the beach club as a way to pass time, their coworkers depend on the job to pay their bills and support their families.

Grossman-Weir said many details in the script have been shaped by Communication junior and show director Sydney Johnson, who is from Martha’s Vineyard, the Massachusetts island where the story takes place.

“It’s been insane because (Martha’s Vineyard) is the most precious thing in the world to me, and now I get to share it with this community,” Johnson said. “All the nuances of it and the things that I love about it — it’s just incredibly thrilling, and I feel so lucky to have this vehicle to do that with (Grossman-Weir), who feels the same way.”

Grossman-Weir describes “Rip Current Water Entry” as a production that’s “full of laughter until it’s suddenly not.” Up until a week before the opening, she was still tweaking dialogue to ensure jokes are meaningful and reveal how characters redirect their discomfort.

According to the senior, work on the script began during a yearlong playwriting course where she asked classmates to share the issues and fears that most occupied their minds.

“I wanted to write something that feels true to this particular moment in time and in history and the anxieties of the world,” Grossman-Weir said. “I also wanted to write with the casualness and the vernacular of people my age, and not try to make the language feel formal or heightened while tackling big issues.”

When approached from a personal level, Grossman-Weir said a lot of today’s “big-ticket buzz words,” including the #MeToo movement, teenagers’ party habits, toxic masculinity and class issues, are much more complicated than they are often portrayed.

She added that while many people view her generation as “shallow and unkind,” “Rip Current Water Entry” highlights the often overlooked ways young people look out for each other.

At Northwestern, Communication sophomore and show producer Rick Hilscher said students are often cast as parents or older adults. He said he thinks audiences will find something truthful in a production where teenagers play teenagers and connect to the anxieties they actually face.

Johnson added that as young people in the audience watch the four lifeguards at this beach club struggle with various internal and external conflicts, she wants them to realize it’s okay to cut themselves some slack.

“I hope that they can accept that it’s really hard to be this age,” Johnson said. “It’s the most tumultuous time of our lives. We’re just learning how to be adults right now. And while it feels like the whole world is already on us, we’re just about to step into it.”