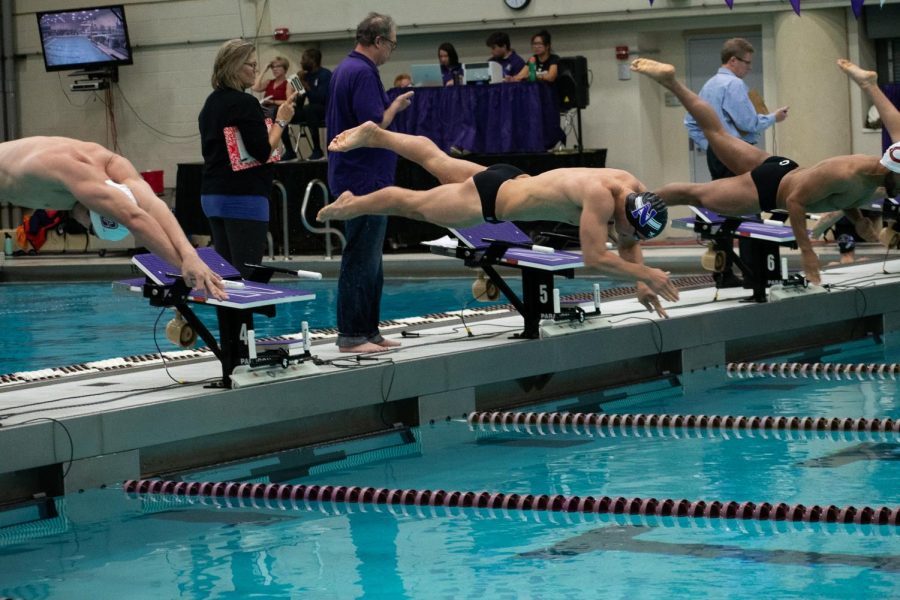 A Northwestern swimmer leaps into the pool. The Wildcats beat Michigan State on Saturday for their first Big Ten dual meet win in nearly six years.

It may have come against lowly Michigan State, but Northwestern has finally broken its Big Ten dual meet drought.

NU had beaten Michigan State (3-4-1, 1-2-1) multiple times in the annual TYR Invitational and had regularly finished ahead of the Spartans at the Big Ten Championships, but the teams had not met in a dual since 2004.

The Cats led from the outset Saturday, taking first place in 10 of the 16 events. Freshman Marcus Mok was among NU’s brightest stars, with individual wins in the 100- and 200-yard breaststroke events. He was also part of a team that took first in the 400-yard medley relay and finished third in the 400-yard individual medley.

Junior DJ Hwang also swam well, winning the 1,000-yard freestyle and taking second in the 500 free. Other individual wins in swimming events came from sophomore Ryan Gridley in the 100-yard backstroke, freshman Ben Miller in the 200-yard butterfly, sophomore Manu Bacarizo in the 200 back and junior Jeffrey Durmer in the 400 IM.

The Cats swept the diving events as well, with sophomore Yohan Eskrick-Parkinson winning both the 1- and 3-meter events.

With the victory, NU is off to its first 3-0 start since 2016 in coach Jeremy Kipp’s second season in charge. The Cats also defeated Illinois-Chicago and Oakland earlier in the season.

NU will have the next two weekends off before returning to action for the TYR Invitational from Nov. 22-24.