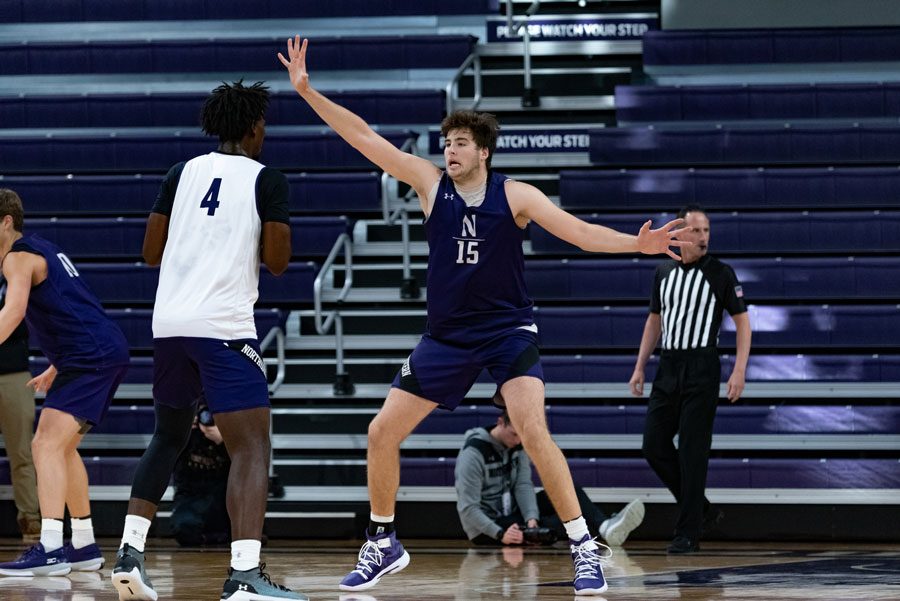 Ryan Young guards Jared Jones in the intrasquad scrimmage. The two big men will be competing for playing time this season.

Dererk Pardon might not have been the tallest in stature compared to other centers in the Big Ten, but his presence was always felt. And this season, Northwestern will have to look to its young big men to fill the void.

It won’t be easy. After being primarily a pick-and-roll player in his first three seasons, Pardon was primarily used in the post last season, and he thrived. Last season, he finished second on the team in scoring with 14 points per game while shooting 57.1 percent from the field.

In his place, coach Chris Collins and staff will look to a pair of newcomers: redshirt freshman Ryan Young and true freshman Jared Jones. With a young team that is more athletic than in year’s past, Collins is going to look for his team to push the ball more and that includes the big men.

“There’s a really good chemistry amongst the guys,” Collins said. “We have very athletic big men. We’re trying to get the ball up the floor a little bit quicker.”

Young, the lone member of NU’s 2018 recruiting class to redshirt last season, will likely be the starter due to the fact that he’s been in the system for a year already. In his brief time playing in the intrasquad scrimmage, the freshman from New Jersey showed the ability to maneuver in the post, while also showing the ability to hit mid-range jump shots.

But he will have to adjust to the tempo of the Big Ten game, as will Jones. According to Rivals.com, Jones was a three-star recruit out of Georgia and a top-10 player in his state.

Jones can shoot from all parts over the court, which is an improvement from Pardon, who only expanded his range in his final year. The true freshman is also unique from Pardon and Young due to the fact that he is playing right away.

For some freshmen transitioning to playing college ball, it can be a difficult experience. However, Jones has the benefit of having help from some veteran players, including senior forward A.J. Turner. Turner said he has taken all of the freshmen under his wing in some capacity, saying that he and Jones have connected early on.

“I can relate to each of them differently and just like spread the knowledge that I’ve gained over these past four years of school,” Turner said. “It’s important just having someone there that you can look up to.”

Fortunately, Jones and Young won’t have to carry the full load due to the Cats’ depth and length at the forward position. This will allow Collins to play smaller lineups that could feature sophomore Pete Nance and freshman Robbie Beran at center.

No matter who plays, NU’s new big men will have to learn fast as the season goes on and so will the rest of the team. But how they play could have a big impact on the Cats’ record in March.

“I see the work ethic, I see the talent that is there,” Collins said. “We’re just a bunch of young guys and a lot of us don’t have a lot of experience.”