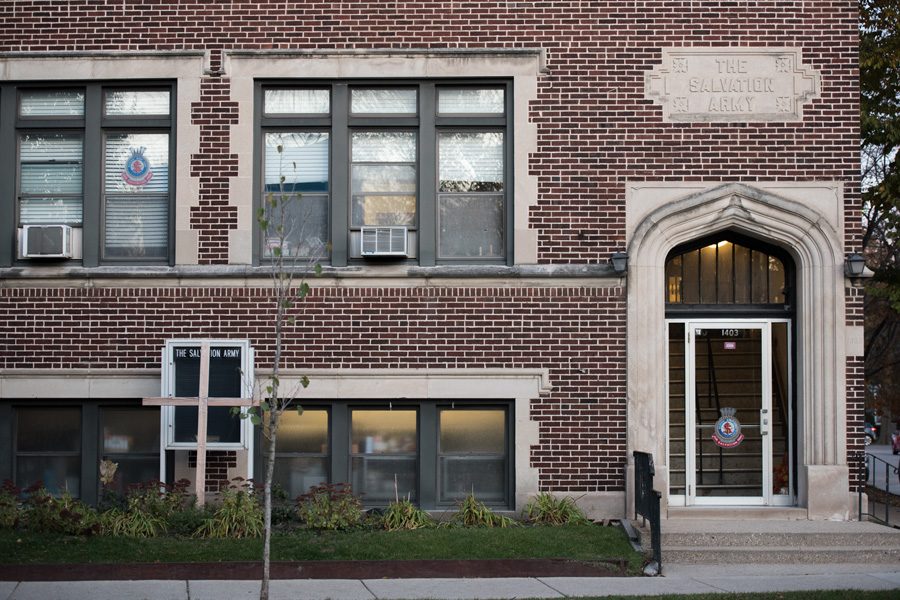 The Evanston Salvation Army, 1403 Sherman Ave. Some residents oppose the group’s plan to buy a church on Hurd Avenue.

Residents have created a petition to block the Evanston Salvation Army from purchasing a church on Hurd Avenue to provide additional programming, objecting to a business coming into a residential neighborhood.

The plan for the Salvation Army to purchase the church at 2715 Hurd Ave. includes programming for a Sunday worship service of about 35 to 40 people, a food pantry, a youth character-building program, a women’s ministry program, an after school music class and programming for seniors, according to city documents.

At a Design and Project Review Committee meeting on Oct. 30, some residents expressed concern that the business would be setting up in a residential area while others said they had safety concerns.

“I moved here to be surrounded by homes, not businesses,” said Peter Boyle, who lives across the street from the church.

Last week, residents started signing a petition that asks the city to deny the Salvation Army’s request. As of Tuesday afternoon, the petition had 125 signatures, with a goal of 1,000.

When signing, some residents said the location is too close to Willard Elementary School — which is across the street from the church — while others said it would bring too much traffic to an intersection with students.

“We as concerned residents, neighbors and/or parents of the Willard community, oppose the purchase of 2715 Hurd Avenue by the Salvation Army,” the petition reads. “We ask the city of Evanston to deny the Salvation Army’s request for ‘special use’ of the property.”

Some residents added that the location in general is not suitable for the Salvation Army. Sixth Ward resident Dennis DeCapri, who lives close to the church, wrote on the petition that he and his family have lived there since 1990 and are concerned about the possible relocation.

DeCapri wrote that there could be an adverse impact on the neighborhood with increased traffic and parking.

“These are not appropriate uses for any residential neighborhood,” DeCapri wrote, “and given the view that there is little, if any, need in this neighborhood for the majority of services provided, it’s hard to understand why the Salvation Army would want to relocate so far from the Downtown Evanston, South Evanston and Rogers Park communities they serve.”

He said there are no plans to operate a resale store at the church or accept donations. In a memo to the city’s zoning administrator in September, Melamed wrote that the group expects around 35 to 50 people for its senior programming, around 30 people for a food pantry, 20 for a midweek worship service and 25 to 50 children for a summer day camp.

At the meeting, Melamed said there are no immediate plans to operate a food pantry at the Hurd Avenue location.

The proposal was held in committee last week, so the Salvation Army can clarify its plans for the property. The committee members said they can review the plan again either this week or next. The item is not on the committee’s agenda for its Wednesday meeting. The Zoning Board of Appeals plans to review the proposal later this month.

Ald. Tom Suffredin (6th) told The Daily he has heard from many constituents and encourages residents to voice their concerns to the Zoning Board of Appeals.

“Until there is a clearly defined proposal before the City Council,” Suffredin said, “it is not appropriate for me to comment other than to say that the concerns of neighboring homeowners and unique issues raised by the property’s proximity to Willard Elementary School need to be addressed by any purchaser seeking a special use at that location.”