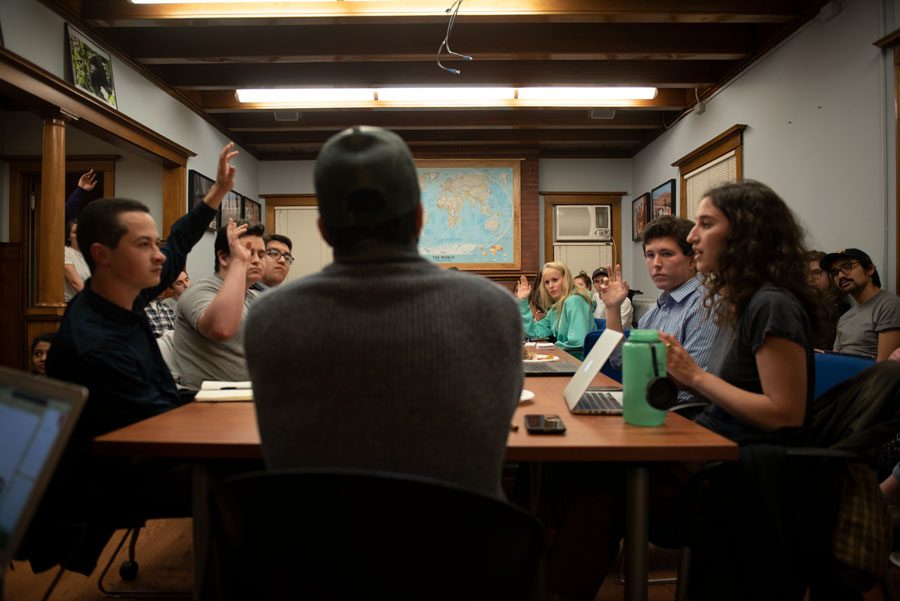 A day before former Attorney General Jeff Sessions makes his opening remarks as Northwestern College Republicans’ fall speaker, more than 50 students piled into the front room of the Buffett Institute for Global Affairs on Monday to discuss the presence of the controversial politician on campus.

Political Union hosted the dialogue in place of their weekly debates on topical political issues. NUCR vice president Dominic Bayer and NU College Democrats president Romie Drori sat across the table from each other, a gavel in between. Both delivered opening statements.

Bayer said NUCR chose Sessions because of both his experience in government and also to encourage viewpoint diversity on campus.

“In an age of increasing partisanship and polarization, it’s beneficial to hear what the other side thinks,” Bayer said.

Drori said she sees Sessions’ presence on campus as “violent to undocumented students and people of color” and plans to attend the protests planned during the event. Nearly 570 students are expected to protest Sessions, according to the event’s Facebook page.

She described Sessions’ past actions as “transphobic” and “xenophobic” and said it’s “alarming” that NUCR would endorse Sessions and his beliefs by inviting him to campus.

Throughout the discussion, students who identified as conservative said they felt ostracized on campus because of their beliefs. Many cited the University’s past pushback against NUCR’s proposed speakers, while Drori said NU College Democrats’ pitched speakers are easily accepted.

Discussing the right to free speech, Bayer described how he feels conservative viewpoints are suppressed at Northwestern.

“The people who are being attacked every day on this campus are not LGBTQ students or people of color, they are conservatives,” Bayer said.

After the discussion concluded, Bayer continued to discuss that claim saying he believes LGBTQ and other marginalized communities receive support at Northwestern, whereas conservatives are not treated like full members of the community since they often can’t express their beliefs in public without pushback.

During the dialogue, Political Union member Sam Cole advanced that point, saying that Northwestern should lean further into its status as a primarily liberal student body.

After the dialogue ended, Cole said he made the suggestion somewhat sarcastically, but also to highlight his experience on campus. Cole, a libertarian, was surprised by the homogeneity of thought when he first came to Northwestern and said he initially felt unwelcome.

Aishwarya Jois, who organized the protest during Sessions’ speech, said in a phone interview that she was invited to speak at the Monday discussion but declined the offer. Jois told The Daily that she did not agree with Political Union’s hosting of the dialogue because “a room of mostly privileged Northwestern students” should not be the center of discourse on Sessions’ legacy in policies surrounding immigration and the LGBTQ+ community.

“Our discussion will be the work we’re doing tomorrow night,” Jois said. “What’s most important is mobilizing people.”

Jois began organizing the protest because as a bisexual woman of color whose parents are first generation immigrants, she said she doesn’t need Sessions to explain the Trump agenda to her.

Protesters made up a small portion of attendees at Political Union’s discussion, but the protest itself was one of the largest topics of conversation. For Bienen junior Sachin Shukla, the protest represents an infringement on free speech. Shukla said he isn’t planning on going to Session’s speech for fear of being “blacklisted” by friends participating in the protest.

NUCR executive member Zachary Kornbluth said the expected turnout at Tuesday’s speech and the concurrent protest highlights the polarization of Northwestern’s student body, a division which was shown through the contentious discourse on Monday.

A previous version of this article misspelled NU College Democrats president Romie Drori’s last name in a second reference and mischaracterized the event as a debate on multiple occasions. Political Union’s intent was for the event to be an open space for conversation and dialogue. The article also mischaracterized and misrepresented Aishwarya Jois’ comments. The Daily regrets the errors.