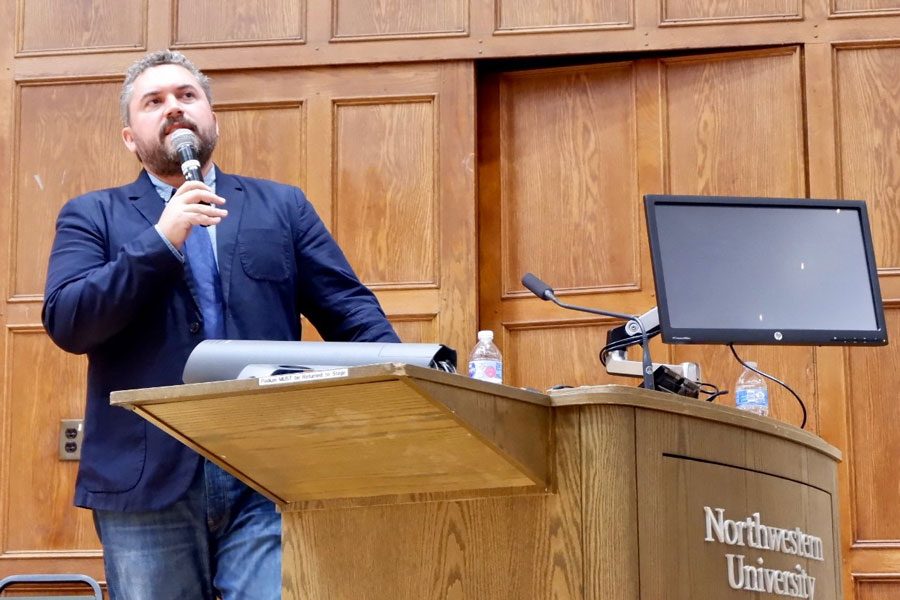 Cody Keenan, former President Barack Obama’s speechwriter since 2007, spoke to an audience of around 300 in Lutkin Hall. Keenan discussed his career path from Northwestern to the White House and gave advice to undergraduate students, validating potential uncertainty in their prospective careers.

“Raise your hand if you know exactly what you’re going to do with your life,” Cody Keenan (Weinberg ‘02), director of speechwriting for former President Barack Obama, asked an audience of around 300.

A few students raised their hands.

Keenan discussed his career path from Northwestern to the White House and gave advice to undergraduate students, in Lutkin Hall on Monday. The Waldron Student-Alumni Connections Program hosted the event in partnership with Northwestern University College Democrats.

After graduating from Northwestern in 2002 with a degree in political science and no job offers, Keenan moved to Washington, D.C. He began working on Capitol Hill as a mailroom intern for Sen. Kennedy (D-Mass.) in September 2003. He eventually made his way to Barack Obama’s 2008 presidential campaign where he worked as a speechwriting intern. From there, Keenan was promoted to deputy speechwriter in former President Obama’s first term and became chief speechwriter in his second term.

He now works as Obama’s senior advisor and director of speechwriting. He also spends his Mondays as a visiting professor in Northwestern’s Political Science department where he teaches a professional linkage seminar on speechwriting.

Keenan said he was inspired to create the speechwriting class, so his students could graduate with marketable skills and a portfolio that could land them a job, something he lacked when he graduated.

“I didn’t even know I wanted to be a speechwriter until I had a chance to write a speech in 2005 (for Kennedy), three full years after graduation,” Keenan said. “I only ended up writing about six or seven speeches for Senator Kennedy, but those are what got me in the door.”

Several students asked Keenan about how his undergraduate major and extracurriculars at Northwestern shaped his future careers. Keenan said he learned most of his speechwriting on the job, and students with a passion for writing should focus on channeling their passion into a talent–“the most important commodity of all.”

Austin Waldron (Weinberg ‘78) understands the difficulty of choosing a career path personally. Waldron, who introduced the event, told The Daily he created and endowed the Student-Alumni Connections Program in Weinberg College because he decided to change career paths halfway through his time at Northwestern and found that there wasn’t much of a support system to guide him through the process.

“It’s very scary to suddenly have to change (majors) and realize you can still be successful,” Waldron said. “The impetus was to help people realize that changing or not knowing all the way through senior year is okay because you’ll find something.”

Peters was fascinated to learn that few 2020 Democratic candidates have full-time speechwriters, whereas in Keenan’s time on the Obama campaign, there were at least three on hand.

“The candidate that’s going to win is the one that does the best job coalescing their worldview, why they’re running, and why their presidency will make a difference,” Peters said. “(Keenan) was spot-on about the value of those longer speeches and the value of ideas broadly stated over a moment of virality.

After the event, Keenan talked about how students on campus are paralyzed by the future, constantly stressing about job prospects, pre-professional career tracks and how many majors they can squeeze into their course load.

He emphasized that students need to ease up on occupying all of their free time with activities they think will look good on a job application and instead pursue things they actually find enjoyable.

“What I want people to realize is that your first job does not determine the course of your entire career — you do,” Keenan told The Daily. “You don’t need to know the answer right now, but pursue the things that interest you, where you think you can make some sort of difference, and where you can do some good.”