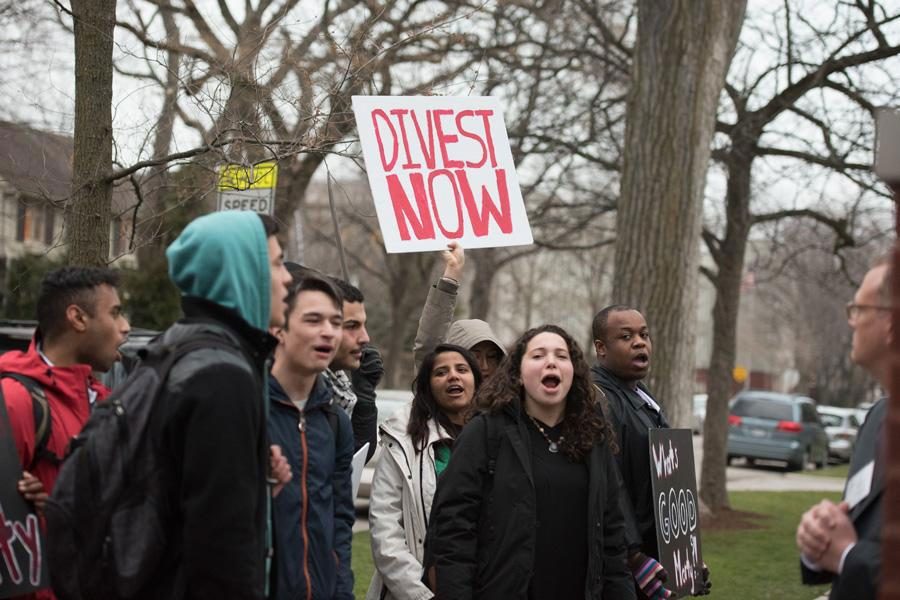 Student activists gather outside University President Morton Schapiro's house in April 2016. Northwestern’s chapter of Students for Justice in Palestine is trying to build strong relationships with other activist groups on campus.

This is the first article in a series called “2020 Vision” which walks through the reflections and hopes student groups, administrators and others throughout Northwestern have on the past few years and upcoming new decade.

As the University enters a new decade, the recommendation remains unmet and Northwestern’s chapter of Students for Justice in Palestine is reckoning with various administrators’ pro-Zionist stances while trying to build strong relationships with other activist groups — relationships with which they hope to push for more lasting change.

A Northwestern member of SJP, who wishes to remain anonymous for privacy-related concerns, said given the 2015 resolution passed by majority vote, it should be understood that many students stand for anti-Zionist and pro-Boycott, Divestment, Sanctions ideals until proven otherwise. Students, the member added, should be allowed to share those opinions without facing backlash on an institutional level.

After Medill Prof. Steven Thrasher in May commended supporters of the Palestinian-led movement in a speech, University President Morton Schapiro and Provost Jonathan Holloway issued a statement criticizing his comments.

“Northwestern as an institution unequivocally rejects BDS,” the statement said. “To the contrary, we value our many relationships with a variety of universities and research centers in Israel.”

Weinberg senior Sharmain Siddiqui, a member of the Northwestern chapter of SJP’s executive board, said both Northwestern’s investments and statements like Schapiro’s condemnation make it hard for students to talk about Palestine in general. However, Siddiqui added she observed increased student mobilization after the University statement.

Northwestern’s SJP chapter is trying to build relationships at the student level, collaborating on events like last year’s Freedom Seder that connect different marginalized communities around the ideals of liberation, freedom and justice, according to the anonymous chapter member.

The member added that the chapter is working with Jewish students, making sure that the distinction between anti-Zionism and anti-Semitism is clear, and pointed out that SJP does not stand for any anti-Semitism within its community.

That line can often be blurred by a growing online database called Canary Mission, whose slogan reads, “Because the world should know.” The site, which has entries about various SJP-involved Northwestern alums, aggregates social media links and information about activists with little distinction between anti-Zionist, pro-BDS and anti-Semitic thought. According to the Forward, a Jewish-American media site, Canary Mission functions as a blacklist and has been used to halt and deport travelers at the Israeli border.

Siddiqui said NU’s chapter is also currently collaborating with Fossil Free Northwestern on a transparency campaign calling for more information surrounding the University’s investments. With Northwestern’s endowment size of over $11 billion — “that of a small, functioning nation” — it is important that the University be transparent about its investments, she said.

Siddiqui added that SJP is thinking more and more about “honoring the legacy and the labor of student activists” that came before them. She said that the chapter’s current work is only possible because of the 2015 NU Divest campaign led by student activists — some of whom now have entries on Canary Mission.

Utilizing the foundational work makes it more difficult for the University to placate student activism, she said.

“Student activism doesn’t have to be transient in nature, even though most of us are around for four years, maybe more, maybe less,” Siddiqui said. “It’s really important that we’re building upon those networks and foundation by being in community and building off of old campaigns.”