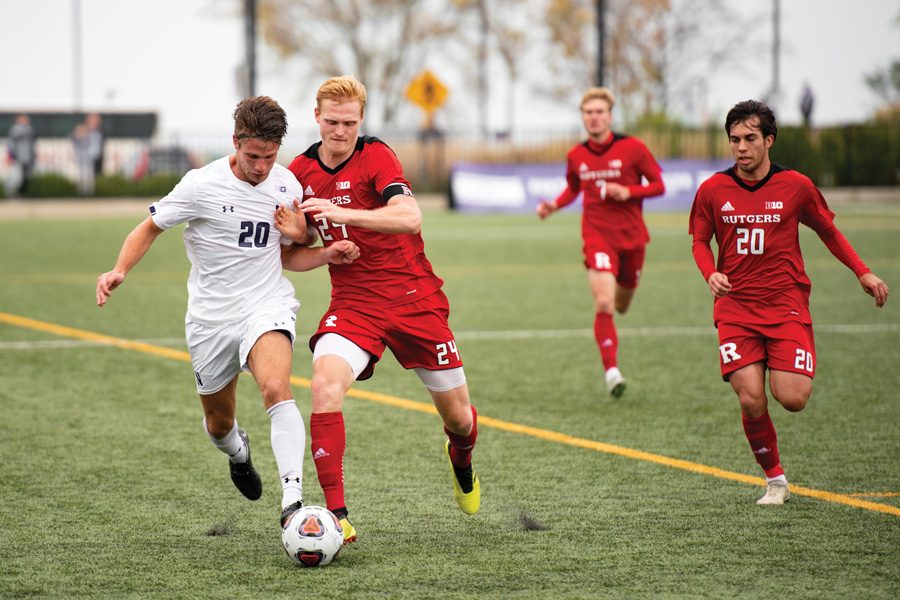 On Senior Night for Northwestern’s men’s soccer, the Wildcats played their best offensive game of the season.

Tying a program record for largest margin of victory, NU (8-7-2, 3-3-2 Big Ten) defeated Div. III Marian University 7-0. The Cats took 20 shots, with 15 of them on-goal, and attempted eleven corner kicks. The victory lifted NU to an above .500 overall record for the first time since 2014.

“Our goal was to find offensive rhythm,” coach Tim Lenahan said. “I think we did that very well (and) we did it early. The game itself was never in doubt. I was really happy with our performance… and a lot of different guys got to play. All in all, a great Senior Night for us.”

NU started the game fast. In the second minute, senior forward Ty Seager fired a rocket from the right side of the box that gave the Cats a 1-0 lead with an assist from senior midfielder Matt Moderwell and freshman midfielder Vicente Castro.

Six minutes later, off a pass from senior Mac Mazzola, Seager sent a cross to sophomore midfielder Richie Bennett, who buried a shot in the right corner of the net for NU’s second goal.

Within the next twenty minutes, the Cats scored two more goals from senior Spencer Howard and Moderwell, giving Seager his second assist. Seager added his second goal of the night when he fired a curving shot past Marian goalie Kevin Cervantes to give NU a 5-0 lead.

The West Chicago native, who finished third on the team with eight points in the regular season, said he was proud of his performance.

“Coming into this game, I knew that it might possibly be my last game on this field,” Seager said. “I knew that I wanted to leave it all out there and do everything that I could. I felt like I did that today.”

By halftime, the Cats had a six goal advantage and added one more in the second half.

Senior goalie Robbie White got a zero-save shutout in the win, his second of the season. White said the team, coming off a big Senior Night win, is beginning to shift into a playoff mindset ahead of the Big Ten Tournament.

“We feel great. We’ve had some big wins,” White said. “Our mentality… is we’ve got to be locked in. Hopefully we can put together a few wins in a row and win a Big Ten championship. I don’t think it’s outside of our possibilities.”

This year though has been different. NU finished the regular season fourth in the Big Ten. Now, the Cats will face fifth-seeded Maryland — a team that NU beat 3-1 on the road in September — in the first round of the Big Ten Tournament at home. NU’s playoff game at Martin Stadium will be their first tournament home game since 2014.

This week, Lenahan said the squad will practice for five days and break down the defending national champion’s game plan. He added that the Cats must continue their trend of play and use momentum from the Marian victory to beat a “disciplined” Terrapin squad.

“This game rejuvenates you a little bit after the grind,” he said. “That’s four games in a row we haven’t given up a goal. I think we’ve been sharp defensively. We continue to add some offensive weapons.”