Katare: On ‘AND is in our DNA’ 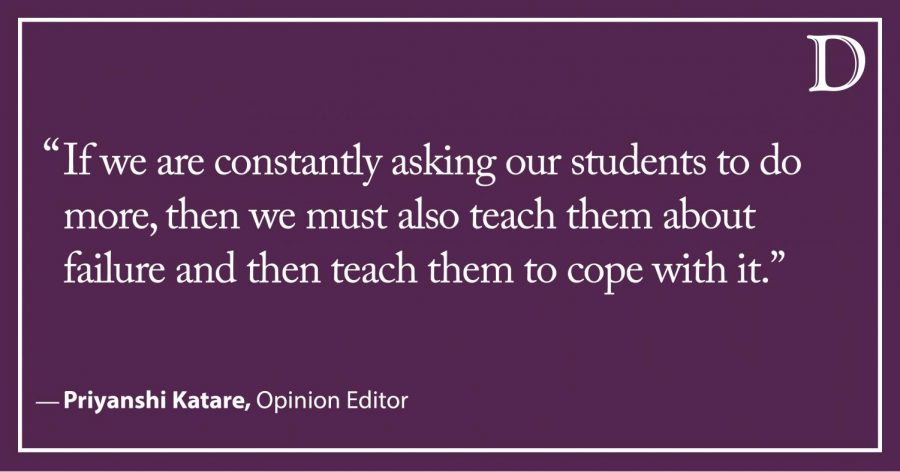 There are nearly twenty one million students enrolled in colleges today.

Nearly five million of them suffer from mental health issues.

Very few of them speak up.

When I first stumbled upon the Facebook group “northwestern places i’ve cried,” I thought that the concept itself was a social commentary. As the name suggests, the Facebook group essentially exists to allow people to report on places on campus where they have cried. Many times, people post about how they felt during or after a midterm along with other concerns about family issues and general stress.

The group is a mouthpiece for the emotional and mental struggles that people have on this campus.

My conclusion, after reading through the posts in the group, is that it’s easier to voice concerns online in a virtual safe space than on campus. Northwestern simply does not have physical safe spaces for students to voice their struggles or failure.

The culture on campus centers itself around academic excellence. There’s a subtle implication that doing good equates to doing more. The distinction between academic excellence and personal development is not understood by its administration.

It’s easy to teach students to do well in a class, but it’s very difficult to teach them to do well for themselves. The latter is more important and the former is what this university focuses on.

It’s the reason why this campus frequently finds itself anxious and overwhelmed.

The underlying assumption is that “AND” is in the DNA of every student that walks this campus and it’s not possible to have a situation where that doesn’t comply with this. For example, not having a double major is unheard of in many circles. As a student who has struggled with accepting this idea, I ask a simple question: “Why?”

I understand the importance of being multifaceted and I believe that’s at the foundation of our school culture. Diversity in academic education is a powerful tool that increases professional preparedness. However, my contention is with the lack of social infrastructure that can actually sustain this ideal.

If we are constantly asking our students to do more, then we must also teach them about failure and how to cope with it. People cannot be good at everything and they cannot perform their best at all points in time. If, as a culture, we are essentially working to stretch students to their limits, then we need to set standards that are practical to achieve.

Academic struggle in such an environment isn’t uncommon, however, the taboo around talking about this in person is. This creates a sense of isolation that is often suffocating for the student experiencing such a difficulty. We need to create spaces that allow people on campus to vent about these difficulties and to release themselves from such an entrapment.

The fear of failure is so high on this campus that it doesn’t allow students to take care of themselves.

Not doing well in any area of life is a learning process and it’s high time this idea is embedded into this university’s culture. We must begin to reward effort and not just mere outcomes.

Priyanshi Katare is a Weinberg sophomore. She can be contacted at [email protected] If you would like to respond publicly to this op-ed, send a Letter to the Editor to [email protected] The views expressed in this piece do not necessarily reflect the views of all staff members of The Daily Northwestern.