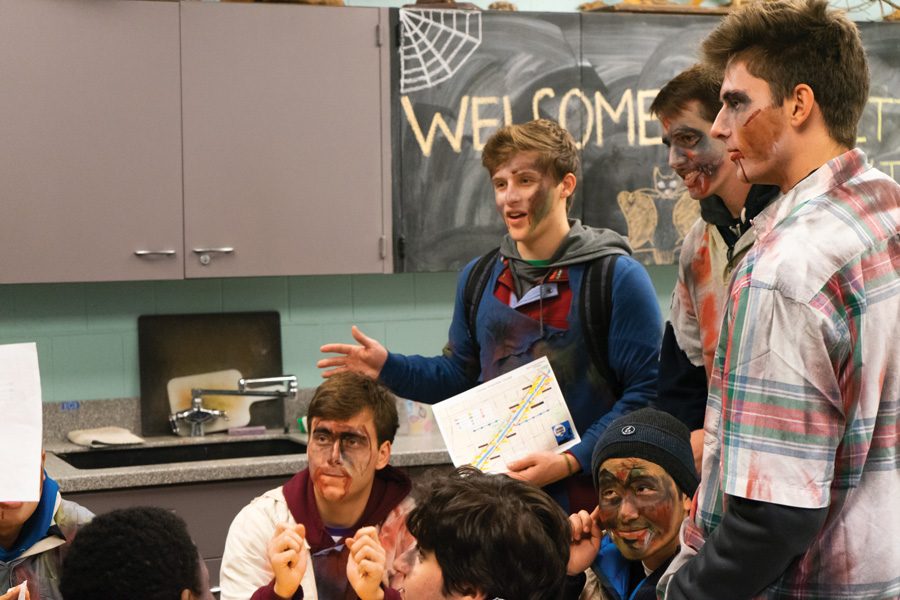 While Halloween may have ended last Thursday, spooky season didn’t.

Evanston hosted its sixth annual Zombie Scramble on Saturday, where families and children run from “zombies.” The zombies, volunteers from Evanston and Northwestern, dressed in ripped and bloody clothes with their faces covered in matching makeup.

The participants, wearing flags hanging from a belt around their waist that protected them from zombie attacks, traversed the 1.6-mile course along the Ladd Arboretum in west Evanston. The run featured alternating “safe zones” and “infected zones,” where zombies hid behind trees, waiting to chase the children. Zombies tried to pull the flags off of the belts, similar to flag football, while participants try to keep their flags, which represent their “lives.”

Michelle Tompkins, a program coordinator for the city’s Parks, Recreation and Community Services Department, started the event six years ago. She envisioned a community-building event similar to a zombie obstacle course in her hometown.

“It was a lot more physical so they did things like climb fences and move tires and things like that, but they did that while they were chased by zombies,” Tompkins said. “The thing that attracted me to it was the community that it built and just the number of people that it took for the event to be successful.”

The event relies heavily on volunteers, particularly from NU. Slivka Residential College and the Sigma Nu fraternity have been sending volunteers every year since the event started.

Among the volunteers was Weinberg sophomore Noah Scantlebury, who came with Sigma Nu.

“We wanted to come out here and have a good time while giving back to the community,” Scantlebury said. “One of the biggest things that brought people was just the concept of being a zombie and chasing people around. It seemed kind of fun.”

Another fraternity, Delta Chi, sent a large crew of volunteers this year. The Delta Chi members served as a zombie relief crew, who were dressed as zombies and alternate with other groups to let them come inside for a break from the cold weather.

Jaime Berkovich, a McCormick first-year, came to get points for Ayers Residential College that will allow him to live in the dorm next year. He was working the final infected zone, trying to pull off the remaining flags before the runners crossed the finish line.

“The kids are faster than I expected and I need to try harder,” Berkovich said. “It’s a good way to keep warm because it is pretty cold. That’s one downside; the people here are pretty chilly.”

Berkovich said the event was an enjoyable volunteering opportunity, as he got to dress up and run around to stay warm.

With over 900 participants registered prior to the event, Tompkins has been happy with the growth of the event since its beginning, when much fewer participated. She said people have been calling trying to get even younger children allowed into the event, which currently allows participants 8 years or older.

“It’s becoming one of those community events that people look forward to and can’t wait to get to the point that they can participate, which is exactly what I wanted,” Tompkins said. “I wanted something that people would look forward to each year that was a little bit different than a traditional haunted house or something like that.”