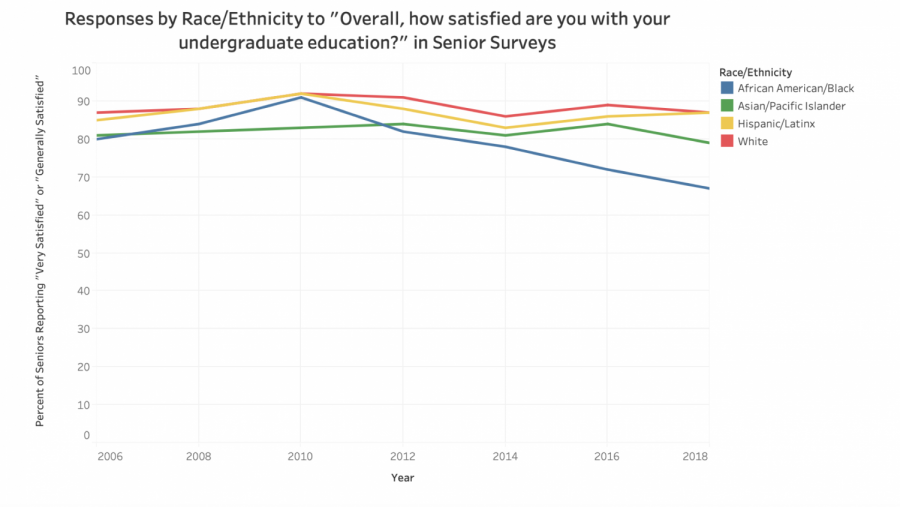 Northwestern’s 2018 Senior Survey, results of which were released earlier this fall, showed black student satisfaction with their undergraduate education was the lowest it’s been in more than a decade — and on the decline.

Black student satisfaction with their undergraduate education was the lowest it’s been in more than a decade, Northwestern’s most recent senior survey data shows.

In 2016, the Black Student Experience Task Force Report found that among undergraduates, black student satisfaction with their overall NU experience was lagging behind that of every other racial or ethnic group surveyed — and was on the decline.

Data from the University’s 2018 Senior Survey was released earlier this quarter, showing the same trend has only been exacerbated. Only 67 percent of respondents who identified as black or African-American reported feeling “very” or “generally” satisfied with their undergraduate education — down from 72 percent in 2016 and 91 percent in 2010.

Specifically, black students were overwhelmingly — and disproportionately — dissatisfied with the degree of ethnic and racial diversity on campus, along with the climate for students of color. Sixty percent of black respondents disagreed or strongly disagreed that students are respected at Northwestern regardless of their race or ethnicity — double the next-highest percentage by racial or ethnic group. 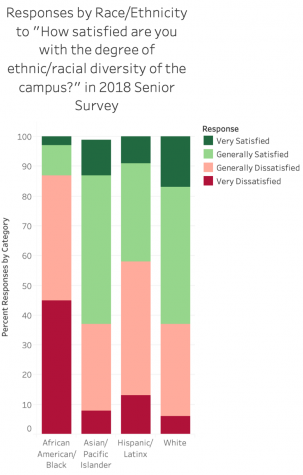 Sixteen percent of black and African-American respondents also said they “definitely would NOT” encourage a high school senior who resembles them when they were high school seniors to attend Northwestern. That was the highest rate among any racial or ethnic group surveyed.

Provost Jonathan Holloway told The Daily in an October interview that he finds the data “heartbreaking.”

As the nation’s racial climate has undergone “radical changes” over the past few years, Holloway said he believes the resulting effect on people of color throughout the country has also contributed to how black students are feeling both at Northwestern and other campuses.

“This is not to excuse the challenges we face here,” Holloway said. “We have to address areas of weakness or frustration whether it’s in terms of advising, faculty sensitivity, housing issues — I mean there’s a whole (number) of different things. But we’re also sort of in the larger ecosystem that is actually out of our control that makes this really challenging.”

In 2018, students commemorated the 50th anniversary of the Bursar’s Office Takeover. Black Lives Matter NU, along with other activist groups, released a list of demands which, in part, urged the University to improve campus culture for black students.

“These demands reiterate the concerns raised in 2015 by Black Northwestern students addressing this institution’s continuous failure to listen to Black students, internalize what they have to say, and act on their recommendations,” students wrote. 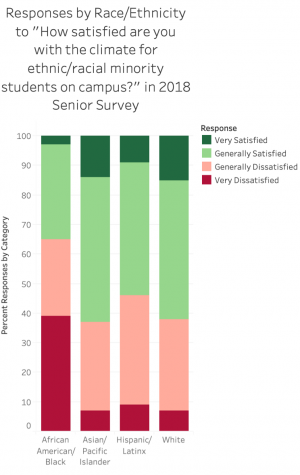 Associate Provost and Chief Diversity Officer Jabbar Bennett told The Daily last month that though he wasn’t familiar with the survey’s specific results, it’s “unfortunate” to see a decline in black student satisfaction with aspects of their undergraduate experience. In order to better interpret the data, Bennett said it’d be helpful to know more about students’ individual experiences and what types of support they sought while here.

He also pointed to the 2016 Black Student Experience Task Force Report as an ongoing catalyst for change in how black students feel about their time on campus upon graduation.

“(The report’s) recommendations, many of which have been implemented, I think are — and will over time — make a very big difference in the satisfaction, overall experience and even success of black students,” Bennet said.