NU-Q students and alumni stage silent protest, dean responds after ‘To Hell with them’ comment 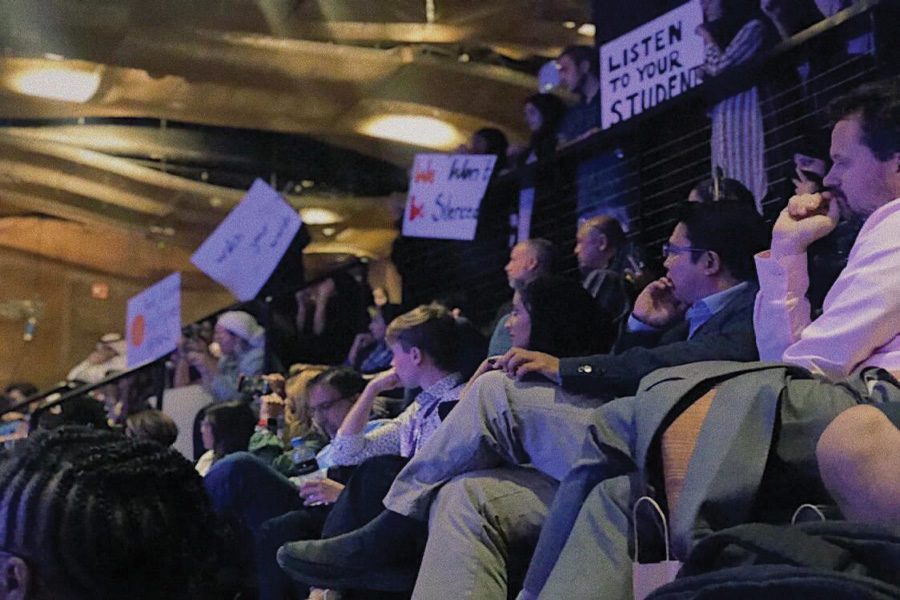 As frustrations with the school’s dean boiled over, more than 100 students and alumni staged a silent protest at Northwestern University in Qatar Sunday afternoon, demanding public apologies and policy changes.

The demonstration follows NU-Q Prof. Justin D. Martin’s Nov. 2 tweet alleging that during a January faculty meeting, in response to Muslim students who were concerned that NU-Q’s graduation had been set on the first day of Ramadan during fasting hours, the school’s Dean Everette E. Dennis told a group of about 40 faculty members, “To Hell with them.”

The protest coincided with a community meeting titled “Conversation with Provost Holloway,” according to The Daily Q, the campus’ student newspaper. NU-Q senior Farah Al Sharif, designated as a spokesperson for the students, delivered the opening statement.

“For several years, we’ve been mistreated, misspoken to, disrespected and ritually discriminated against by not only multiple faculty members but by our very own dean,” Al Sharif said at the protest. “The members of the Northwestern community who are supposed to teach us, shape us as human beings.”

After Muslim students at @NorthwesternU were upset @NUQatar's graduation was in Ramadan fasting hours, the American non-Muslim dean said, publicly, "They can go to hell." Equally sad, what I heard from students: they couldn't tweet/report the story as they're afraid of the admin.

An assistant professor in residence at NU-Q filed an EthicsPoint complaint following the January faculty meeting. The complaint stated that Dennis interrupted a female faculty member voicing student concerns about the scheduled graduation, yelling: “To Hell with our students! Every year they whine about something!”

The complaint also alleged that “Dennis has repeatedly belittled and insulted students both to their faces and in public forums.” The dean called students “ungrateful bastards” to two undergraduate representatives in March 2017, according to the complaint, and dismissed them as “grumpy” in an April 2018 email to NU-Q community members when students questioned his choice for a commencement speaker.

At the community dialogue, Dennis said his January comments were “plainly misconstrued and conflated,” adding that they were directed at the student complaints and not the students themselves.

Dennis said Sunday that Martin’s tweets the day before Holloway’s scheduled visit were “obviously very much timed” and described the professor’s comments as a part of his “vendetta against the dean,” according to The Daily Q.

Martin, however, told The Daily Northwestern he tweeted because he no longer wanted to be complicit in NU-Q’s silencing of student complaint. In the past, Dennis’ “authoritarian figure” intimidated students on the NU-Q campus, he said. Non-tenured faculty at NU-Q also hesitated to speak out in fear of retaliation, Martin added.

“What’s really broken my heart also as a journalism professor is knowing that the students at NU-Q are afraid and intimidated to speak out about these kinds of things,” Martin told The Daily. “As far as I know, most of the senior class knew about (Dennis’s comments).”

Al Sharif said the silent protest marked the first time she’d seen everyone on campus — students of all ages from all programs — gathered “so unitedly.”

Despite their differences, she said they managed to organize the protest efficiently and effectively.

“My main concern was there wouldn’t be enough people that would show up,” Al Sharif said. “But to my surprise, everyone showed up, even those who didn’t know about the protests managed to find their way into the auditorium… I was so overwhelmed and I was so impressed and I was so proud that for the first time I was watching the community really unite like this.”

After Martin’s tweets, a July 2008 blog post from NU-Q Assistant Prof. Jocelyn Sage Mitchell resurfaced on Twitter, which many NU-Q students called out as racist. Mitchell’s post said that in Qatar, “the scent (reek) of sweat, and some ‘nationalities’ literally pushes you back a few feet,” and “the ratio of Men to Women is 8:2 with the ratio of Ugly Women to Not So Ugly Women being 9:1,” according to The Daily Q.

Al Sharif said Northwestern only supports freedom of speech when it supports the University’s interests. The NU-Q senior said Northwestern’s lack of response with regards to Mitchell’s blog post versus Holloway and President Morton Schapiro’s immediate release of a statement condemning Martin’s tweet on 9/11 was an example of administrators “cherry-picking” which parts of freedom of speech to defend.

“It’s really shameful that we pick and choose what parts of freedom of speech we can agree with when it comes to following a certain agenda that Northwestern may be following,” Al Sharif said. “But when it comes to racially profiling or dismissing local communities, and saying that indians reek, or saying that there’s a ratio of nine-to-one ugly women in this country, it’s completely dismissed.”

A Nov. 3 statement from NU-Q, co-signed by Holloway and Dennis, referenced a series of tweets made over the weekend “targeting the dean” and said the posts “were based on comments and blogs that were made some time ago.” The statement added that while supporting the community’s well-being is a high priority, “there have been instances where we failed to reach that standard and for that, we apologize.”

“It grieves us that someone within NU-Q would try to hurt this community that we all have worked so hard to create,” the statement said.

The protest also addressed what students called a history of inadequate responses to Title IX claims, which created a campus environment where they feel unsafe.

In response, Holloway said the University will commit to addressing Title IX claims at the Office of Equity in Evanston.

Dennis will serve as dean through Summer 2020 and return to the faculty at Northwestern in Evanston after the 2020-21 academic year, an April University news release announced. The University formed a search committee to select Dennis’ replacement, but no decision has been announced.

Al Sharif said some students have been pushing for a female dean, while others want a dean of Arab descent — though NU-Q has had neither.

“We would like to find a dean that has a cultural understanding of what it’s like to be a dean for an American university in the Middle East,” she said.

Students communicated their major concerns through various class group chats and held a poster-making session the night before the protest.

Al Sharif said she was surprised and proud to see so many students in the auditorium for the protest. Minutes before it began, she emphasized the need for students to be silent until called upon and to avoid profanity for their protest to be taken seriously.