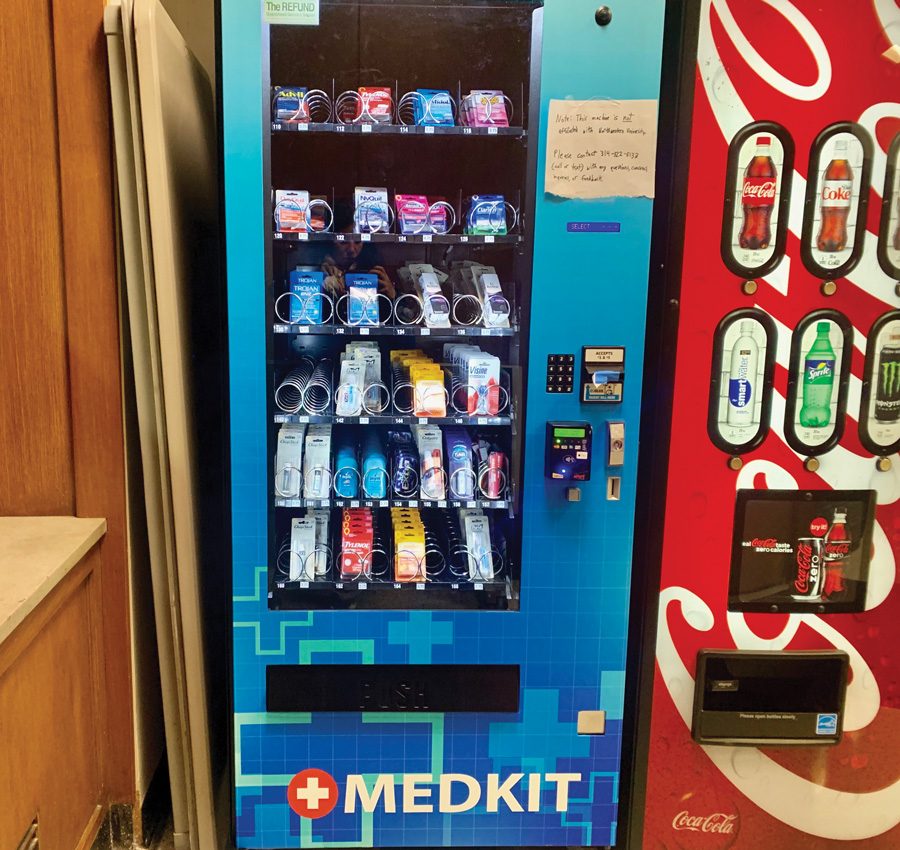 Sargent Hall’s new vending machine pharmacy. MedKit Solutions hope the machine can be a comprehensive and accessible option for students.

Now, add MedKit Solutions to the list, which is looking to solve a completely different problem.

The machine opened Nov. 1 in Sargent Hall selling over-the-counter medication, hygiene products and sexual health items. Matthew Urban, Chris Holland and Ashorne Mahenthiran, founders of MedKit, hope it to be both comprehensive and accessible — “a pharmacy, in a vending machine, in a dorm.”

Urban and Holland, Weinberg seniors, and Mahenthiran, a Feinberg first-year, developed the concept as Wildcat Wellness in 2018 for the inaugural Improve NU Challenge. The then-four man team took home third, and have since been told that the lack of administrative approval had hurt their placing.

For Improve NU, Holland said the team sent out a survey that garnered 336 student responses — data that became motivational for the project. The survey found that 40 percent felt the symptoms of illness at least once a week and 82 percent felt deterred by the walk to CVS or another off-campus source.

“The most concerning thing we saw was that 64 percent of students had failed to treat their medical symptoms at some point, just because it was inconvenient for them to purchase medicine,” Holland said. “We saw that and we were like, ‘Jeez, that’s horrible.’”

Administrative approval came through out of the blue this August, when the team received the go-ahead from Carlos Gonzalez, the interim executive director of residential services. They got moving fast, and MedKit, an alteration of the standard Canteen machines across campus, arrived on Thursday and opened Friday.

MedKit’s prices are higher than those in CVS, Target or Norris’s Fresh Market, with a 6-pack of Advil going for $3.75. Holland said they think the convenience of being in a dorm warrants a slight markup. Urban added that they would like to hear from students if the prices are too high.

“The next month, two months, three months, we’re not trying to make money. We’re trying to prove this works,” Urban said. “We really just want to see this on campus and just see it come to fruition and hopefully help students.”

Sid Ahuja, who started Improve NU as a member of Associated Student Government his sophomore year, has stayed alongside MedKit as a mentor and an administrative contact point.

The McCormick senior and Ayers Residential College Resident Adviser said that he knew the idea was smart from the beginning, thinking about how hard it can be to access medicine from North Campus. Lisa’s Cafe has a smaller medicine selection than MedKit.

Depending on student feedback, Urban and Holland plan to open machines in other dorms, following their stated goal of accessibility. The two neuroscience majors have joined the Residency Program at The Garage — MedKit is the combination of several interests. Urban said he tried to find a niche thing that could help the community health-wise, but also would teach him about entrepreneurship.

“I never expected to be able to integrate those two so much into one project, because I knew there wasn’t a class that was medicine and entrepreneurship,” Urban said. “But this was something that we could kind of create ourselves and tailor it to what we’re most interested and most passionate about.”

This story was updated at 10:59 p.m. on Nov. 4 to clarify MedKit’s founding members.