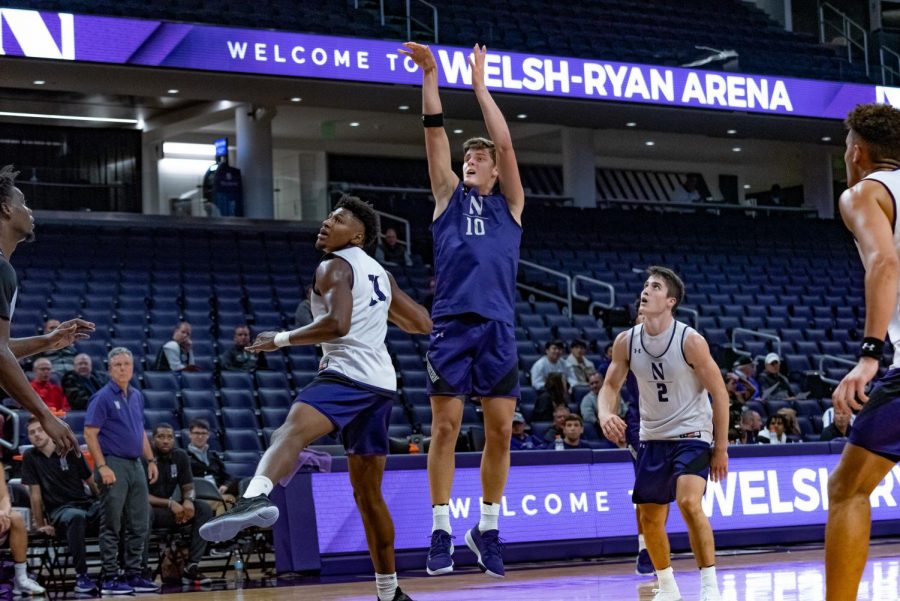 Miller Kopp follows through on a three pointer. The sophomore forward played a large role offensively on Thursday.

Pete Nance and Miller Kopp went through a lot of firsts as freshmen last season –– first game, first start, first basket. But they had to wait an entire season before coach Chris Collins gave them the keys to the offense for the first time.

Last year they were role players, but now the sophomore forwards ran the show for the Wildcats. They were the most aggressive players on that end, and Collins called plays for them on NU’s first four trips down the floor.

In the Cats’ 105-64 exhibition win Thursday over Div. II Quincy at Welsh-Ryan Arena, Nance and Kopp were among the leaders in minutes and field goal attempts while combining for 16 points and four assists. More importantly, they created open shots for the rest of the team, helping NU get 64 points off the bench.

Even though the former four-star recruits both shot worse than 40 percent from the field last year, the two forwards proved Thursday they’re able to fill the scoring void left by Vic Law and Dererk Pardon.

“It’s going to be an evolution,” Collins said. “You’re not just going to show up and be this 25-point guy. Neither of those guys are at that point yet, but they’re good players.”

Nance showed moves he didn’t have last season, including a few different types of turnaround fadeaway jumpers in the post. Combined with Kopp’s perimeter shooting, the two of them led NU on a 25-10 run in the middle of the first half that put the game away.

Nance and Kopp started alongside sophomore guard Ryan Greer, junior guard Anthony Gaines and redshirt freshman center Ryan Young. But Collins advised not to read into that decision since he just wanted to give equal opportunity to everyone in his ten-man rotation.

With that being said, it was still surprising to see senior forward A.J. Turner –– the team’s leading returning scorer who started 20 games last season–– begin the game on the bench.

“We all know that we have a very versatile group,” Turner said. “We’ve got ten guys who can play. We’re just seeing which groups can gel together, seeing what happens when each group is out on the floor.”

With Kopp nailing two early threes to get on the board, NU led for the final 38 minutes of the game. Freshman guard Boo Buie scored 18 points, draining three threes in his first competitive collegiate experience and connecting with graduate guard Pat Spencer on a cross-court alley-oop.

Buie played the best on that second unit, which featured him and the other four active scholarship players. Collins rotated between groups for the first 12 minutes of the game before experimenting with different lineups, most notably Nance’s debut at center. Collins also played different combinations of Buie, Gaines, Spencer and Turner at the guard spots, trying to find the ideal alignment.

The Cats open the regular season on Nov. 8 against Merrimack. Collins said he isn’t sure if he’ll implement the same “hockey-substitution” strategy, which hasn’t been seen at a high-major since the 2014-15 Kentucky team.

But he is certain that all ten players will play a significant role going forward.

“I tried to tell our guys that I feel a lot of our guys can start,” Collins said. “It’s all about finding the right mix, what lineups are good together. Who starts well and who’s good coming off the bench. I want all those guys to be in a position where it’s not about starting.”