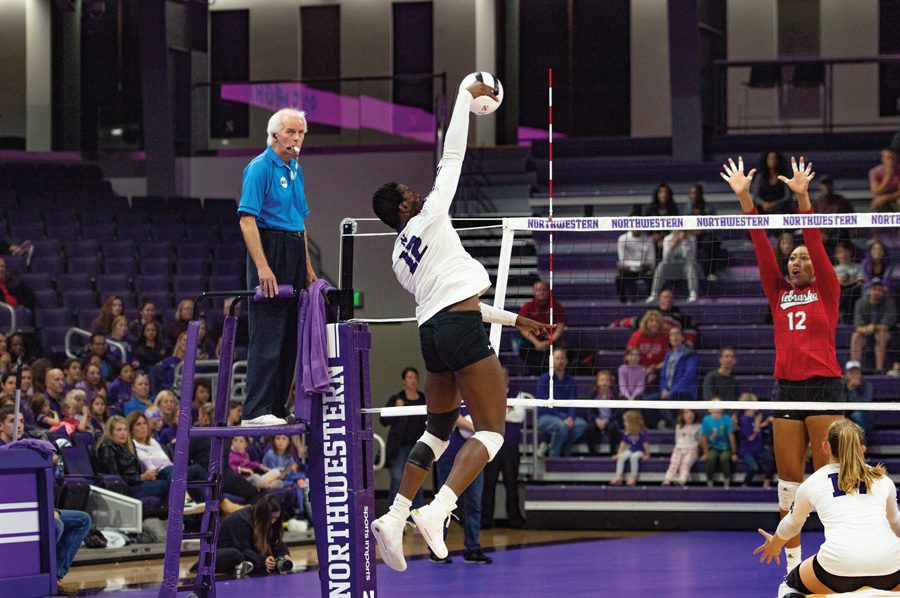 Temi Thomas-Ailara jumps to hit the ball. The freshman outside hitter might not play in the Cats’ game on Friday.

While Big Ten volleyball may be reaching its halfway point this weekend, Northwestern’s goal is the same as when conference play began over a month ago: win a Big Ten game.

The Wildcats return to Welsh-Ryan Arena this weekend to host a pair of matches, taking on Michigan State on Friday before battling Michigan on Saturday night.

NU (9-13, 0-10 Big Ten) is the only Big Ten program not in the win column and lost to Rutgers in New Brunswick, N.J. last weekend, a program which previously had won one conference game since joining the Big Ten in 2014.

He added the team has been working in practice to try and recreate high-intensity situations to improve performance when it matters.

But the biggest storyline heading into the weekend is the health of star freshman outside hitter Temi Thomas-Ailara, who has the second-most kills in the Big Ten. Thomas-Ailara was injured during the Scarlet Knights game last weekend, and whether or not she plays will have a big impact on the Cats’ chances in these matchups.

The Spartans (13-7, 4-6) come into Evanston reeling after only winning one set total from three straight home defeats. It’s hard to blame Michigan State for its recent form considering the quality of its recent opponents — No. 4 Wisconsin, No. 6 Minnesota and No. 7 Penn State — some of the best teams in the country.

A win for the Spartans would help solidify their position in the middle of the crowded Big Ten standings. Also, after only winning five games in Big 10 play last year, the Spartans could match that total this year a month before conference play ends.

On Saturday, NU will face the Wolverines, who will be coming off a game against Illinois in Champaign.

After winning its first five conference games, Michigan (13-7, 6-4) was on the verge of entering the national rankings, but the Wolverines have slipped recently, losing four of their last five games.

However, those four losses have all been to teams ranked in the top 10 in the nation, and the Wolverines took the first two sets against the Golden Gophers last Friday, before ultimately losing 3-2.

For Northwestern, this weekend has the potential to turn its season around and rise in the standings or sink the Cats deeper into the abyss of the Big Ten.

“I think in general our team needs to find a way to be more consistent,” Davis said. “Now we can finish sets, now we gotta figure out how to finish a match.”