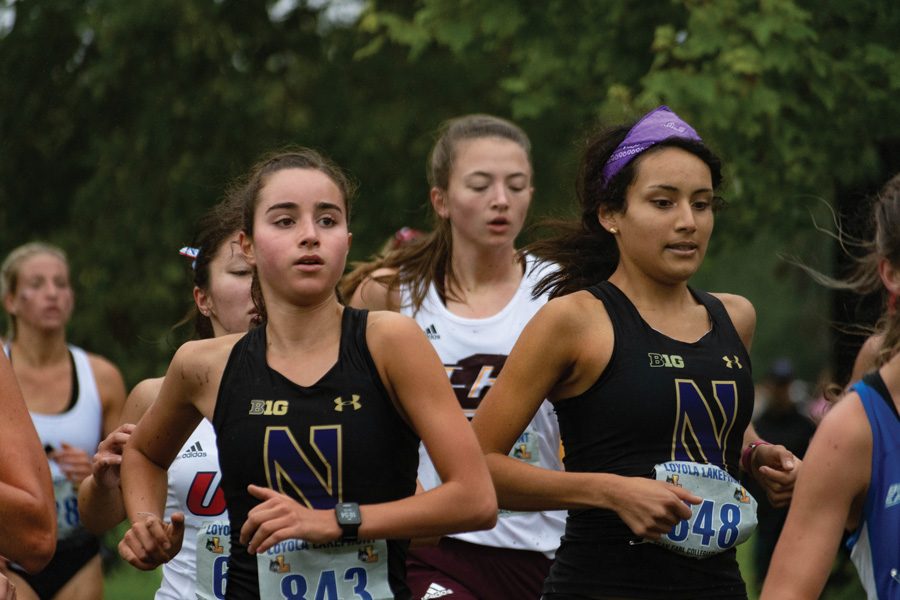 Cross country runners at the 2019 Loyola Lakefront Invite. With the 2020 season up in the air, Northwestern cross country is focusing on staying healthy and staying connected outside of practice.

Coming off a fifth place finish in the “White Race” at NCAA Pre Nationals, Northwestern will face its greatest challenge of the season at Sunday’s Big Ten Championships in Columbus, Ohio.

The Wildcats found their stride at NCAA Pre Nationals in Terre Haute, Indiana, with three runners placing in the top 30 and the team finishing in the top half of a meet’s standings for the first time this fall. NU’s confidence was an important factor in its success, one that coach Jill Miller hopes to parlay into their preparation and execution for the conference championships.

“The challenge of conference week is being excited and also compartmentalizing and making sure that you don’t enter the race being depleted of energy because you got too excited early in the week,” Miller said. “We’ve planned out times to sit down and focus on the race, where we want to be tactically, and bring that same confidence that we brought to the race out of Terre Haute.”

While that performance earlier this month was a step in the right direction, Big Tens will be a whole different animal for the Cats. They’ll have to face tough competition, including national contenders No. 7 Wisconsin, No 8. Michigan and No. 9 Michigan State.

Miller said the end results will come down to how well NU can execute and keep a competitive mentality.

“The margins (between teams) are very small,” Miller said, “and those margins can be filled up by a willingness to hurt to push through pain for your teammates. I really want to see that fire when the going gets rough to push through, work together, and get 100 percent out of ourselves and each other.”

For graduate transfer Clare Severe, this weekend represents a chance for a breakthrough performance. Severe, who competed in soccer and track for Lehigh prior to coming to Northwestern, had never run cross country entering this season.

Though Severe did not finish her race at Pre Nationals, Miller believes Severe is capable of closing the crucial gap between the Cats’ third and fourth runners.

“She knew coming in she had a lot to learn, having never having run the length we’re doing workouts,” Miller said. “Her progress in training has been incredible. When we put it all together and she learns what it’s like to hurt for a long period of time, she’ll have a big breakthrough and be very helpful for us.”

With NCAA Regionals looming, the time is now for NU to determine whether it can compete with the top teams in the nation.

Still, Miller says the Cats’ focus is set squarely on the task ahead.

“All of our focus is on the Big Ten Championships,” Miller said. “That is the most important thing to our program right now. It’s our goal to get out there and overachieve, so we have all eyes on Sunday and have not even begun moving forward to the regional meet.”