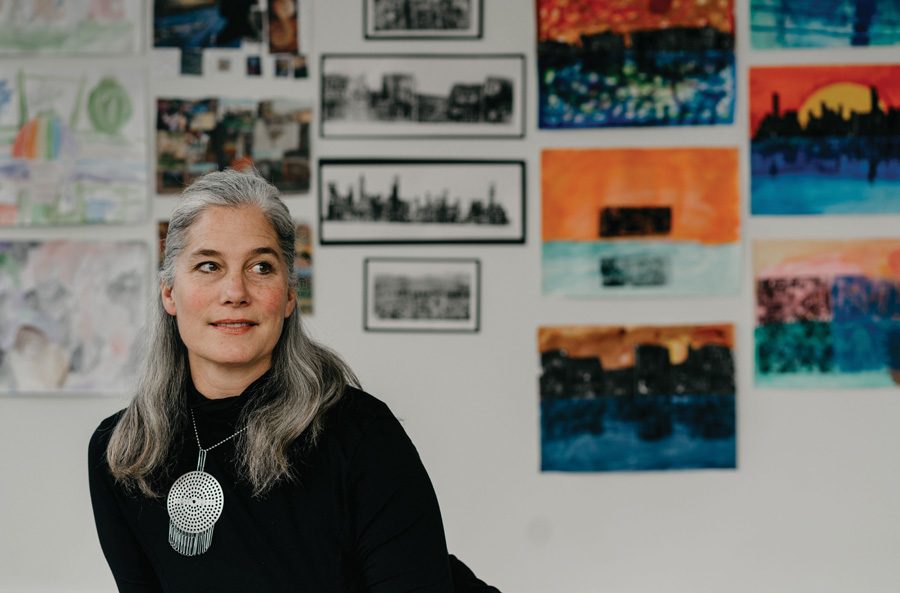 Lisa Degliantoni at One River School Evanston. As executive director of Evanston Made, Degliantoni said the organization has tried to shine a spotlight on the city’s vibrant arts scene, and her core mission is to engage local artists with the public.

“Cutting-edge,” “dynamic” and “contemporary” are not generally words associated with Evanston’s art scene, said Lisa Degliantoni, the executive director of Evanston Made. She said outsiders often picture a grandmother painting watercolors when they think of Evanston, but that could not be further from the truth.

Evanston contains 10 times more artists than the national average, according to a report by evanstARts. Degliantoni founded Evanston Made, an organization that aims to shine a spotlight on the city’s vibrant arts scene. Her core mission is to engage local artists with the public.

“I want to know the painter who lives next door,” Degliantoni said. “Making art can be so isolating… there’s tremendous validation and community coming out of this organization.”

Since 2012, Evanston Made has worked with about 500 local artists. Currently, 217 artists are paying members. They participate in studio tours on the first Saturday of every month, attend monthly social mixers and fill the Evanston Art Center with their pieces throughout June.

The organization recently launched an online calendar to centralize community arts events in Evanston. In April, Evanston Made will lead an initiative called Art of the Earth, where local artists will display Earth-related works. A percentage of artwork sales will also support a tree-planting initiative.

Before Evanston Made, the city lacked a coherent arts scene, said Darren Oberto, a member and co-owner of Alley Gallery. Since the inception of Evanston Made, a network of artists has crystallized, bringing both exposure and a sense of community, Oberto said.

“This is the most concrete idea that anyone’s had that has really stuck around,” Oberto said.

Cramer, who has a background in education and marketing, said Evanston Made fills that gap by breaking down the barrier between artists and residents.

“We want (art) to be very approachable and friendly,” Cramer said. “There’s something really special about meeting the person who created the art that you’re buying, which I think really attaches a whole new level of meaning to it.”

A ceramics artist and longtime member of Evanston Made, Joanna Kramer said Evanston Made advertises all of her events and inspired her to establish an active presence on social media. Since becoming a member, she said her ceramics sales have increased.

“They are a cheerleader and promoter, fan of all creatives in Evanston,” Kramer said.

Evanston Made is taking steps to become a nonprofit and will eventually establish a board and a brick-and-mortar headquarters, Degliantoni said. She added that she hopes to display members’ artwork in a future building and support artists-in-residency.

As a nonprofit, Evanston Made will expand its programming for more frequent events. The organization will also grow to attract a larger audience both from Evanston and the larger Great Lakes area, Degliantoni said.