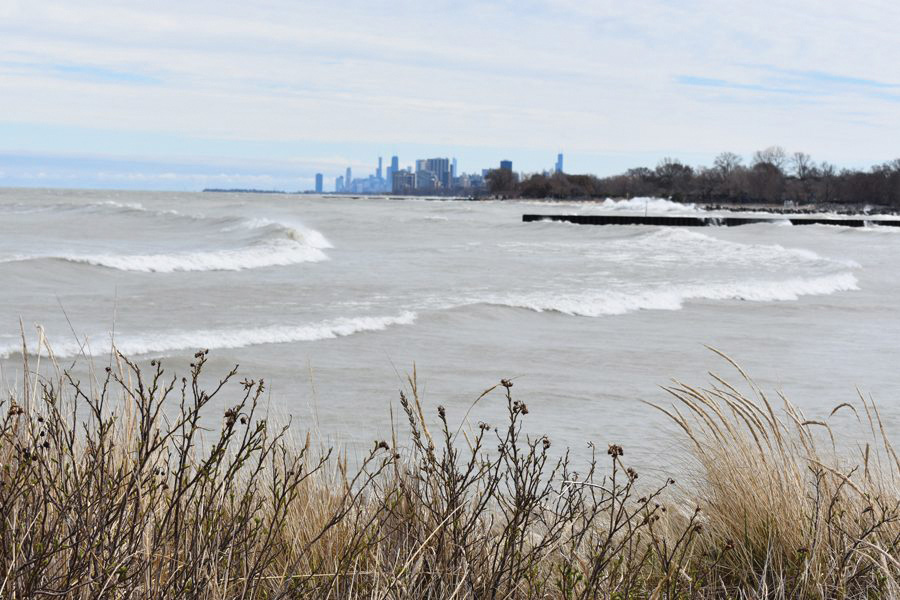 Lake Michigan. The city praised the success of outreach in its climate action plan.

Almost a year later, Kumar Jensen, Evanston’s chief sustainability and resilience officer, said the plan’s greatest success in implementation has been getting more people and organizations to talk about and work on the objectives of the plan.

“It’s somewhat hard to measure the impact, but the reach has been phenomenal,” Jensen said. “We would like to see young people more engaged in policy and programs within the city, and having them receive good information about what some of the challenges are. We hope to also spur some good feedback and suggestions of things that we could do.”

The city used CARP to recognize some of the dangers climate change poses to residents, especially for low-income and people of color, who are more often exposed to climate hazards and have a reduced capacity to adapt to such hazards. Climate change has already started taking a toll on the Great Lakes region, with states in the area recording an overall 1.4 degree Fahrenheit rise in temperature in the period of 1985 to 2016 compared to 1901-1960.

The plan envisions a significantly more environmentally friendly Evanston by 2050, where the city is carbon neutral, has implemented and achieved a zero waste strategy and green infrastructure has been equitably distributed throughout the city.

CARP itself defines success as “outcome-focused,” meaning that progress toward the plan is measured in outcomes that advance the goals of the plan, such as reducing greenhouse gas emissions or increasing renewable energy use. CARP anticipates human behavioral change and outreach will help create desired outcomes.

Jensen said outreach has been successful in the sense that more people are interacting with and working on the plan than in previous months. For example, Jensen said EvanSTEM, an Evanston/Skokie School District 65 project designed to increase underrepresented success in STEM programs, has students using local climate change-related content in their science fair projects.

The Democratic Party of Evanston’s Climate Action Team also serves as one of the organizations using CARP to address climate change.

Bob Heuer, the chair of the Climate Action Team, said the DPOE seeks to initiate a cultural change that gets residents more concerned about climate change threats. He and the task force plan to act as a liaison group for various Evanston organizations, especially District 65 and Evanston Township High School District 202.

He also said DPOE identified five different groups, including the Citizens’ Greener Evanston and the D65 Green Team, to hopefully join the organization in making a presentation at the Nov. 19 City-School Liaison Committee meeting to implement CARP goals in schools, such as composting in school lunchrooms.

“There are a lot of people who want to do something and they don’t know what to do,” Heuer said. “If you’re just thinking about what you’re doing in the context of a broader set of groups, then let’s make this City-School Liaison Committee the venue where students can drive a lot of change.”

Jensen also mentioned that coordination between individual Evanston groups can be one of the trickier aspects of climate change response.

He said he wants to work on getting groups together to create a “conceptual map” of which CARP actions are being acted upon, so the city and organizations don’t overlap exactly on climate response actions.

“At some point, it’s likely we’ll see a more strongly facilitated coordination, but at the moment it’s mostly just trying to get people in the same room, because we don’t want to squash some of the more community-driven activities,” Jensen said.

The city plans to hold a CARP coordination meeting at 6:30 p.m. on Nov. 6 to help address this issue.

Another cause for concern for some Evanston activists is the proposed 2020 budget, which they argue only includes a little bit of support for CARP. Currently, that budget hopes to “forward the objectives” of CARP under its capital improvement effort, which is located in the Capital Improvement Program that outlines general expenditures over the next few years.

The policy in the budget also includes promoting waste reduction strategies and trying to eliminate environmental hazards on public land.

Wendy Pollock, chair of the Evanston Environmental Board, said she thinks the city still made great strides when the council adopted CARP, and the Public Works Agency has “embraced” the urgency of climate action.

She said, however, that climate change needs to be addressed in a wider sense, and that climate doesn’t show up often in the budget plan.

“There are systemic issues, and it means moving them to the top of the agenda, addressing (climate change) everywhere and in everything we do.” Pollock said.

Ultimately, Pollock said, there is only so much a local government can do, especially when it comes to reducing emissions on the scale needed to truly mitigate the impacts of climate change.

Laura Winston, the co-leader of the chapter, said Evanston’s carbon reduction commitments in CARP are “wonderful,” but relatively useless without government intervention.

The organization pushes mostly for the implementation of a carbon tax, and are now pushing for a carbon tax bill that was introduced in the U.S. House of Representatives in January.

“Climate scientists and economists recommend… that the most effective strategy would be a high price on carbon,” Winston said. “Not to say that lots of things don’t need to be done, but in our organization we say this is the best first step.”

CARP, however, aims to address hyper-local issues due to climate change, including the increasing frequency and intensity of storms that threaten to overflow Evanston’s sewer system.

Next year’s proposed budget includes an initiative to create and conduct a hydraulic analysis, described by Jensen as a way to study the sewer system to see where water flows in the city and which areas of Evanston are most susceptible to flooding. The analysis should then give further insight into what the city can do to mitigate the more noticeable and urgent effects of climate change.

In the first or second quarter of 2020, Jensen said the city also plans to release a benchmark report on items like the waste diversion rate and greenhouse gas emissions with the hope of getting a better idea of how on-track the city is to meet CARP’s goals.

Jensen said he hopes for the city to take action on several key pieces of legislation in 2020, particularly getting City Council to vote on a package of waste reduction policies, which are currently out for comment; and to come up with recommendations to update the city’s building and energy code.

He recognizes, though, the concern some may have about the amount of time these mitigation and adaptation efforts outlined in CARP could take, especially since the Intergovernmental Panel on Climate Change released a special report in October 2018 saying the world had approximately 12 years to reduce carbon emissions, or risk a global temperature increase above 1.5 degrees Celsius, or 2.7 degrees Fahrenheit.

Many CARP policies, though, take time to implement. For example, city staff have to be trained in environmental matters before they can begin crafting effective strategies for climate adaptation and mitigation.

Extra money and resources, though, could help alleviate these issues.

“Talk to your elected officials and let them know,” Jensen said. “Some things we may be able to do faster if we have more money, some of them just take a while.”