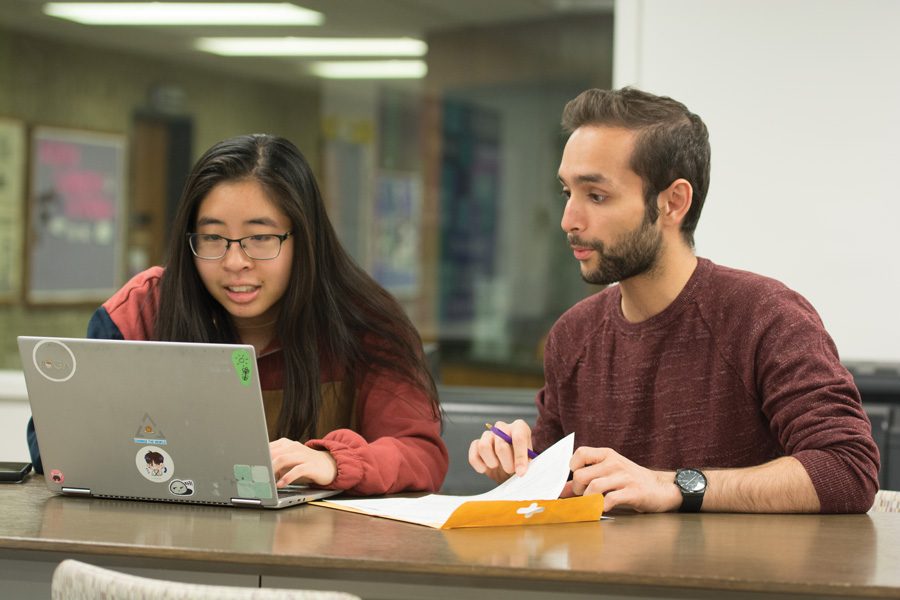 But for Fufunan and the thousands of seniors enrolled in Chicago Public Schools, Nov. 1 also marks the first day back to school since the Chicago teachers strike began Oct. 17 — the end of an 11-day-long stretch without teacher feedback on their college essays.

But Fufunan won’t submit unedited essays. Thanks to Northwestern juniors Andrea Lin and Khizar Nandoliya, who organized an essay feedback project for CPS seniors, Fufunan received comments on his Common Application essay and a University of Chicago supplemental essay.

Over 400 CPS students have submitted college essays for review through Lin and Nandoliya’s outreach.

CPS teachers took to the streets to protest a shortage of school nurses, librarians and social workers and large class sizes. In the Oct. 31 compromise between Mayor Lori Lightfoot and the Chicago Teachers Union, CPS offered teachers a 16 percent pay raise, $35 million to reduce class sizes and 250 additional nurses by 2023.

After Nandoliya mentioned that the strike poses an obstacle for seniors to work with teachers on college applications, Lin made a Google Form asking CPS seniors to submit essays. She then asked CPS alumni to edit those essays, organizing responses in a Google Spreadsheet. That night, she posted both documents on Facebook, and the post had around 200 shares the morning after, she said.

Now, Lin’s original post has been shared over a thousand times.  One tweet sharing the project has amassed over 500 likes and 700 retweets. CBS Chicago wrote about it, and Newsy, a national news network, reached out to Lin for an interview.

“I’ve never been part of something that has blown up like this,” Lin said. “I’ve had a news station contact me today. I just figured, if I could get the word out to more CPS seniors that this is a thing that exists, that would be good.”

Many early decision and action applications are due Nov. 1 and Nov. 15. Some Chicago-area colleges have extended deadlines in wake of the strike. Northwestern Admissions released a statement on its Facebook page Oct. 30 indicating that CPS students should submit their Common or Coalition applications by Nov. 1, but can “work with (their) teacher(s) and counselor(s) to send other documents once schools have reopened.” The University of Chicago extended its Nov. 1 early decision and action deadlines to Nov. 10, and the University of Illinois at Chicago said it would extend its deadline for submitting accompanying materials for CPS students.

Lin and Nandoliya, along with Northside College Prep alumna and Weinberg sophomore May Nguyen, originally intended to edit the essays themselves. As essays piled up, that goal quickly proved unrealistic.

“It’s not uncommon on the documents to see three to four people leaving comments on the same essay,” he said. “That way, the person receiving feedback gets a slight variety of feedback, which can be useful in determining ultimately how they want to shape their essays.”

Fufunan found the form after Lin’s sister posted it on her Instagram story. It has been posted in Northwestern class Facebook groups, CPS senior Facebook groups and linked in articles from national news outlets.

Lin said she’s unsure how long the form and spreadsheet will remain active, but added that it’s “reasonable” to keep the documents open during regular decision.

Weinberg junior Marcianni Morillo has edited three essays through the spreadsheet. The Whitney M. Young Magnet High School alumna shared the project, as well as other essay editing services for CPS students, on her Facebook.

She called the project an “untapped source of community.”

“The project emphasizes how much we appreciated our teachers in high school and how much they worked regardless of the amount of money that they were getting,” Morillo said. “This is an indirect way of giving that back, and being like, ‘Hey, you taught me all of these skills in your English classes, so this is my way of giving back when I’m sure you’d want to help at this time.”