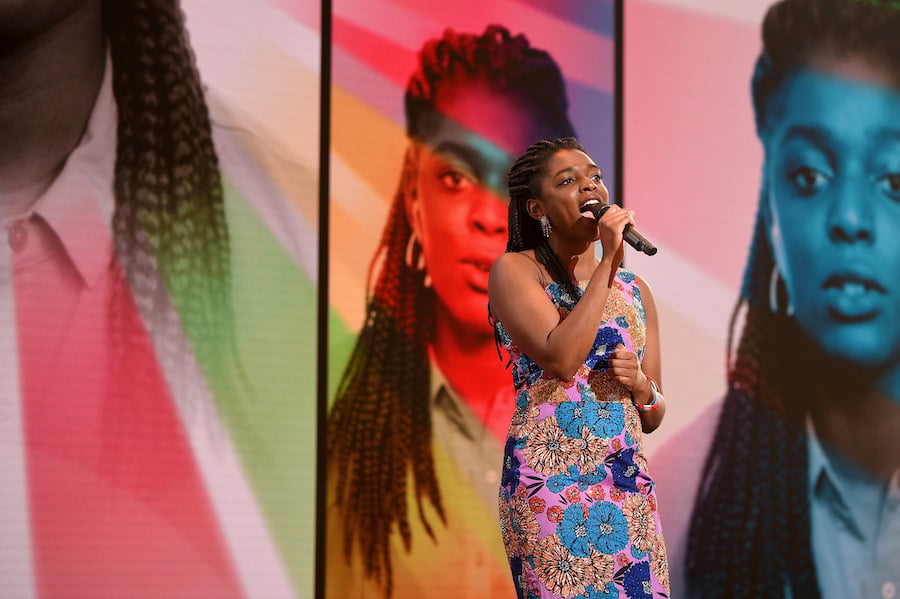 Ogi Ifediora performs at Goalkeepers 2019, at Jazz at Lincoln Center on September 25, 2019 in New York City.

Aca-Believe It: How Ogi Ifediora rode a wave of a cappella to a career in music

The summer before her senior year of college, Ogi Ifediora (Weinberg ‘19) found herself bored and needing something to do. After deciding not to take the LSAT, she had over a month of free time before school started. So she made an Instagram account, where she began posting mostly a cappella singing videos and has since gained nearly four thousand followers.

Posts on @ogi._.i are typically collages of Ifediora singing every part of a song, the videos stitched together using the app “Acapella.” At Northwestern, Ifediora was a member of THUNK A Cappella and was one of the group’s music directors for three years, which gave her experience singing without a backing track.

“The way I would verify if my arrangements sounded alright was through me recording my voice on GarageBand,” she said. “Learning how to do that was really important in my development as a musician. It helped me understand how to make harmonies work.”

Ifediora originally made the account as a way for her to keep her love for music and arranging alive after graduating and starting a job. Her initial plan was to put her degrees in political science and legal studies to use instead of singing full-time — as a Nigerian, she said she was expected to find a career in law, medicine or engineering. But this summer, she discovered how far her voice could take her.

One of her videos was shared with the head of the nonprofit Project Everyone, which works to accelerate the United Nations’ global sustainable development goals. They host an event in New York City called Goalkeepers to celebrate those goals, which aim to make the world a more equitable place. The conference, held in conjunction with the Bill & Melinda Gates Foundation, had a list of influential speakers from around the globe — but they needed an artist.

After browsing Ifediora’s Instagram videos and learning of her prior work with AIESEC, an organization that also focuses on the UN sustainable development goals, the head of Project Everyone selected her as an artist in residence for the event. She said they liked that she did a cappella because they wanted to hold an a cappella workshop with some grassroots leaders at the event.

“They wanted to have to make sure that I had everything that I needed,” Ifediora said. “They asked me ‘Oh, do you have any friends who like do a cappella and live in the New York area?’”

Thankfully, Ifediora was able to bring three THUNK alumni along with her to lead the workshop. She arranged a medley of songs for them to teach a group of conference attendees. The group was sectioned into voice parts, each person led by one of the four alumni. The next day, they performed the song for a live audience.

Before the group’s performance, Ifediora performed a live, solo a cappella mashup of Beyoncé’s “Freedom” and Pharrell Williams’s “Freedom,” backed up by screens of herself singing its intricate background harmonies. Her friend Steven Layne (McCormick ’17), who taught the bass section, said he was taken aback by the song even though he’d heard her sing many times before in THUNK.

“I was just kind of listening to her and how beautiful her voice is,” Layne said. “She just has this knack for music.”

Ryder Chasin (Medill ‘18), who was also in THUNK, said his favorite part of the event was seeing Ifediora in her element.

Chasin said the two of them had worked together making arrangements for THUNK and creating original songs, and added Ifediora always turns music into a next-level experience.

“It’s hard to articulate that she’s a genius without making it as simple as that,” Chasin said. “She understands things in music and can create and move things in music that other people can’t even see or register as being there. It’s a rare special talent.”

Despite her gift for music, Chasin said Ifediora is the “most gracious and humble person,” and it’s hard not to root for her because of that. Her humility may come from the fact that, for a while, she didn’t even think she was a good singer.

Ifediora remembers hearing a harmony for the first time when she was 4 years old at her mom’s prayer group. When she heard someone deviate from the notes everyone else was singing, she wanted to do it, too. She started singing a lot after that, to the point where it would annoy people.

“I wasn’t super great,” she said. “I remember one day my sister said to me, ‘You’re not that good that you should be singing all the time.’ Because her word meant everything to me, I stopped singing from the end of fifth grade until junior year of high school.”

Ifediora started singing again by auditioning for her high school’s jazz choir, but music didn’t become a part of who she was until Northwestern. Her freshman year, she auditioned for a cappella groups, and THUNK was the only group that called her back.

The first arrangement she did was “Georgia on My Mind” by Ray Charles, as a parting gift for THUNK’s president, using the software MuseScore. She said she got lost in the music and worked on the piece until 4 a.m. one night.

“I thought it was so cool to…put together this puzzle,” Ifediora said. “It’s cool to try to simplify a song to seven or so parts. You have to take the essence of the song and put a song to its basics and still allow it to be recognizable.”

Ifediora doesn’t have any traditional music training, so arranging songs was how she learned scales and chords. Thinking of music in individual parts has been really valuable for her, and she said producers have told her they’ve never seen anyone approach music the way she does.

When working on her own music, Ifediora said she tends to draw from older musicians from the ’70s like Stevie Wonder and Michael Jackson. She said she enjoys performing jazz the most.

“My voice is pretty good for jazz,” she said. “What most people like about it is my tone and vocal control which you need. You need both of those things to do well as a jazz singer.”

Currently, Ifediora lives in Los Angeles where she’s writing and recording original music. She plans on releasing a new song next month, and she said she’s in talks with producers and record labels. She said it’s surreal to think about all the places she’s been invited to and the people she’s met.

“A producer that has been really involved in a lot of people’s careers has been a friend to me,” she said. “It’s crazy the connections I’ve been able to get.”