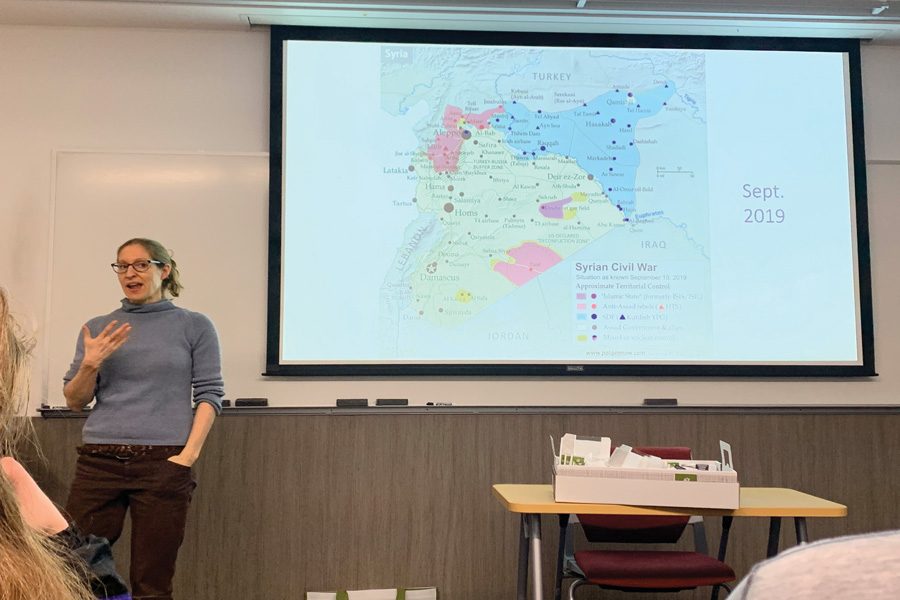 Prof. Wendy Pearlman speaking at event co-hosted by NU College Democrats and NU Political Union. Pearlman explained the current state of the Syria conflict and how the crisis can further evolve.

Political science Prof. Wendy Pearlman discussed the past, present and future of the crisis in Syria at a moment of instability and rapid changes of international policy

Pearlman, author of “We Crossed a Bridge and It Trembled: Voices from Syria,” spoke in Kresge Centennial Hall at an event co-hosted by Northwestern University College Democrats and the Northwestern University Political Union. In front of a crowd of 35 people, she explained the current state of the Syria conflict, the international community’s response to the United States’ recent withdrawal of troops from Northeast Syria, and how the crisis can evolve from here.

“With the United States announcing its withdrawal, you have all these other actors — Russia, Turkey, the Assad regime — switching around and changing their positions,” Pearlman said. “One actor withdrawing from the scene changes the game for everybody else.”

Turkish President Recep Tayyip Erdogan proposed a 30 kilometer “safe zone” in Northern Syria — an area occupied by the Kurds, an ethnic minority — in order to resettle Syrian refugees that fled to Turkey after the 2011 Arab Spring. The problem with this action, Pearlman said, is that not only is resettlement a violation of international law, but also the Syrian refugees currently in Turkey are not even from the Kurdish territory of Syria. Relocating them in the Northeast could amount to an ethnic cleansing of the Kurds, she added.

On Oct. 22, Russian President Vladimir Putin hosted Erdogan in Moscow and struck a deal that would allow Russian and Turkish troops to take control over parts of Northern Syria, allowing the Assad regime to reconsolidate and return to power. Russia, a long-time backer of the Assad regime, is now enabling Assad to remove Syrian Kurds from the previously allocated safe zone, Pearlman said.

“Russia has emerged as a global superpower in the vacuum of leadership that the United States has abandoned, especially in the Middle East,” Pearlman said.

Pearlman said U.S. involvement in Syria has been disastrous because the sole objective has been to combat ISIS while passively ignore the humanitarian crimes waged by the Assad regime. She added ISIS emerged as a symptomatic consequence of the retention of the Assad regime, and the U.S. decision to withdraw from Syria has helped enable the Assad regime to rise back and dominate the entire region.

After her presentation, Pearlman was asked about the recent death of ISIS leader Abu Bakr al-Baghdadi, and how it changes the current situation in Syria as the Assad regime has been focusing its forces on targeting Syrian Kurds and not ISIS-supported rebels.

“ISIS’s engine is an ideology, a set of grievances. It’s never been an organization about individuals,” Pearlman responded. “ISIS has traditionally flourished in vacuums and chaotic situations. What we have right now is a totally chaotic situation. I’d bet on ISIS coming out stronger rather than weaker.”

Sarah Bryant, Bienen-Weinberg Dual degree junior and Northwestern Political Union external events chair, said that it’s been hard to keep up with the unfolding events in Syria because of so many daily developments.

She said that Pearlman’s explanation of the escalation of the crisis in Syria has made her scared of the U.S. decision to “give up its say” after being such a powerful force of stability in the region and the sole protector of its Syrian Kurdish allies.

McCormick sophomore and Northwestern College Democrats communications director Ayesha Prashanth echoed Bryant’s thoughts. She emphasized the importance of having an expert such as Pearlman host this discussion with complex visuals about how the distribution of power in Syria has evolved over time.

Prashanth added Pearlman clearly broke down the timeline of the Syrian crisis, allowing students to engage in a complicated subject. Pearlman explained how one tweet by President Trump caused U.S. troops to withdraw from Syria overnight with no preparation whatsoever, which Prashanth said was devastating to learn.

“It’s sad that this is what foreign policy has boiled down to—that the world can change with one tweet,” Prashanth said.