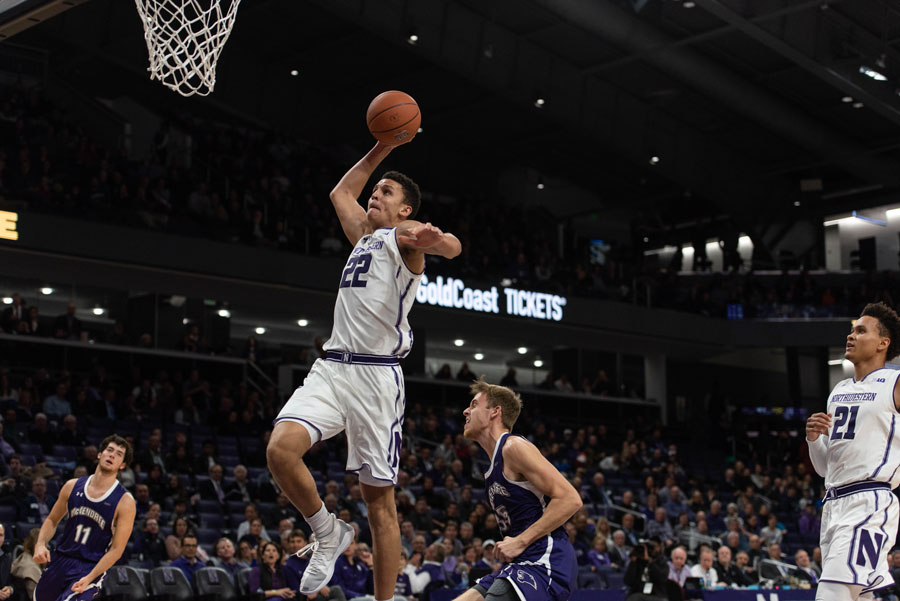 Pete Nance throws down a dunk. The sophomore forward is being put in the position for a breakout sophomore season. (Daily file photo by Katie Pach)

Pete Nance throws down a dunk. The sophomore forward is being put in the position for a breakout sophomore season.

Men’s Basketball: Pete Nance’s quest to be a ‘star-type player’

Northwestern could have used Pete Nance in an 18-point loss to Maryland last January. But he was 350 miles away.

While the Wildcats were playing in College Park, Maryland, the freshman forward was at home in Akron, Ohio. Sitting on the couch with his parents. Eating applesauce.

Sure, he wishes he could have eaten something more substantive, but mononucleosis had that effect on his appetite and his body. While Nance was sick, he lost 15 pounds in four weeks.

Coach Chris Collins sent Nance home after he was diagnosed with a severe case of mono last January. In addition to the weight loss, Nance had an ear infection, a sinus infection and a swollen throat that made it hard to get food down, even applesauce. There was nothing Nance could do but wait, as he struggled to get out of bed each day.

All of this impacted his presence on the court. Nance’s coaches have always believed he needed to put on weight and become more physical. Nance gained twenty pounds during his freshman season so he could hold up better in the Big Ten, but mono took all that progress away from him. Nance missed nine games because of his illness last season, and when he returned to the court at the end of February, he played like someone who’d been sick.

“I don’t think I ever really got into the shape that I was in before I got mono,” he said. “It just really took a lot out of me.”

Nance has spent the last eight months rebuilding himself. Now he weighs 225 pounds and has actual biceps for the first time in his life. When Nance saw former teammate Vic Law in October, the first thing Law mentioned were Nance’s muscles.

Nance wants to show off his growth this season, and Collins said the sophomore looks strong enough to carry the team on his back.

“We want him to be a star type player,” Collins said. “Those kinds of guys impact the game at all levels, and I want him getting in that mindset.”

When Nance came to Evanston in the summer of 2018, he knew he wouldn’t have an easy transition into college basketball.

“It was a lot coming in being a freshman at this level,” he said. “You think you know a lot about basketball, but there’s a whole new world of stuff you have to learn. It was all about taking it all in and trying to keep moving.”

In his first season, Nance could never earn a consistent role in the rotation. Opposing post players would lower their shoulder and score right through him, and Nance struggled finishing around the basket even when smaller players were guarding him. Nance just wasn’t big enough, and he averaged 2.9 points per game in 13.9 minutes.

Nance took 75 shots last year, and over half of them were from three-point range. If you take out his dunks, Nance missed the majority of the shots from within three feet of the basket. Instead of using his long arms to lay the ball in the rim, Nance took fadeaway jumpers or passed the ball.

When Collins drew up a play that gave Nance a chance to get a bucket, he had a hard time executing. In the Big Ten Tournament last March against Illinois, Nance was guarded by a scrawny six-foot-two guard, Tyler Underwood, but Nance failed posting up someone eight inches shorter than him. Instead of powering his way to the rim, Nance missed an eight-foot turnaround jumper, and Collins quickly took him out of the game.

“When you’re 200 pounds at 6-foot-10 and you start to make a move, people put their bodies on you,” Collins said. “You have to learn how to play through physicality. That was something he was struggling with out of the gate.”

Becoming a more physical player is a challenge for almost every freshman, but Nance had an additional adjustment to make. Throughout high school, he’d been a point-guard. Nance was the Magic Johnson of northeast Ohio, whirling crosscourt passes and throwing down multiple dunks a game on the fast break.

On a Wildcats team with three high-usage seniors, there was no way Nance would get to do any of that. He basically had to learn a new position as a pick-and-pop stretch four. As a freshman, he barely touched the ball.

“It was hard (for him) not being a point guard anymore,” said Dean Rahas, Nance’s high school coach. “The big thing for him was moving without the ball and finding ways to impact the game when he’s not a high-usage player.”

Nance never looked comfortable in that role, so Collins played him less often as the season went on. Frequently last year, Nance would make a mistake on the floor, Collins would shout “Pete!” and the freshman would quickly be out of the game. He logged fewer than 15 minutes in the majority the Big Ten games he played.

This year, Nance is expected to play 30 or more minutes every night. There arguably isn’t a player in the Big Ten who’s being asked to make this big of a jump in minutes or role on the team. To some extent, NU’s fate, whether last place in the Big Ten or impressive in conference play, rests on Nance’s shoulders.

Nance’s shoulders are much bigger now.

He’s added more weight and more confidence. He started a new nutrition plan this summer that includes a lot more pasta than he used to eat. His work ethic and attitude in the weight room stands out compared to the rest of his teammates, and Nance has been one of the most dominant players in preseason practices.

The Cats will need that work to pay off right away this season, as they lost over 60 percent of their scoring. Nance is going to get the ball a lot more often this season, and Collins said he wants to see Nance play more aggressively.

“He’s always been a guy who’s been an incredibly unselfish player,” he said. “He’s always been someone who likes to pass. I want him to get into a mindset where he’s thinking more about scoring.”

In the Cats’ preseason intersquad scrimmage, Nance brought the ball up the floor multiple possessions. When he attacked the basket off the dribble, he got all the way to the rim. Now that he’s stronger and can score better in the post, bigger players will have to defend him. And when bigger players defend him, Nance has less resistance driving to the basket.

Because of this dilemma Nance poses to opposing defenses, Collins said he expects the sophomore to be one of NU’s hardest-to-guard players. He has faith in Nance’s physicality that he’s planning to play him at center frequently. That never happened last season, but Nance has grown enough to make the coaches reconsider what he can become.

“I know I’m going to have a bigger role this year,” Nance said. “I’m just literally trying to do anything I can, so we can prove everybody wrong.”