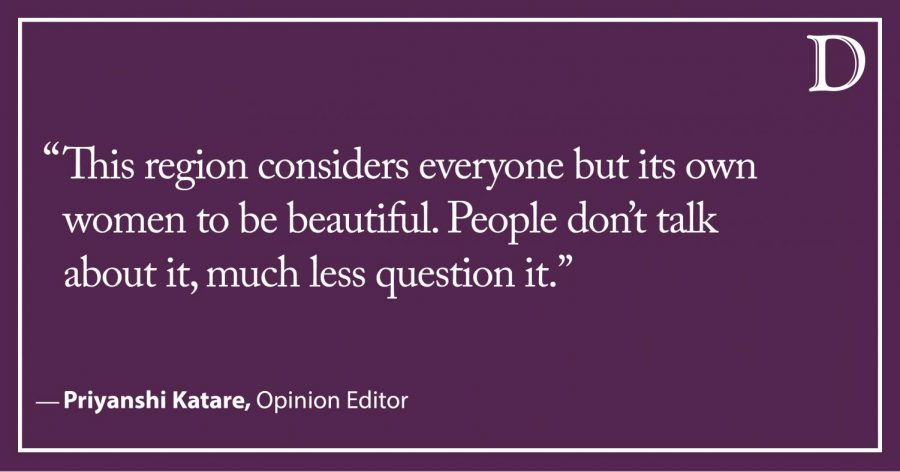 South Asia has a colorism problem. This is a region that is racist against itself. Many people subconsciously look down on dark skin and hold a fetish for fair skin. My goal here is not to pit two skin colors against each other but to talk about the beauty standards and social mentality in nations that were once ruled by imperialists.

If you were to flip through television channels in any country in South Asia, you would stumble on a commercial for a skin whitening product. To give you a better idea of what this commercial might look like, let me provide you with the common storyline:

A woman in her twenties is struggling to find a job. She relentlessly tries and gets rejected after every interview. Dejected and tired, she seeks assistance and is immediately handed a fairness cream. In the course of a few days, her complexion becomes five shades lighter, and suddenly, her life becomes perfect.

This is a stark portrayal of the social cost attached to beauty standards that governed the decision-making process in the commercial at every step.

Imagine being an impressionable teenager and watching this commercial. How do you not give into such a depiction of self-worth when you are constantly bombarded by it?

I was this teenager, and I struggled with the way I looked for a long time. I am what the average Indian woman looks like: dark skinned, petit and black haired. Yet, I felt the need to comply to this Eurocentric ideal. It almost felt like a necessity. Diversity was an unknown concept in beauty when I was growing up. There was one ideal and if you didn’t fall under it, you weren’t considered to be beautiful.

Unfortunately, even in its evolution, this ideal is still influenced by the social myths its European colonizers left behind. This region considers everyone but its own women to be beautiful. People don’t talk about it, much less question it. The notion of self-worth and desirability is skewed toward whiteness, and this Eurocentric ideal puts women at an economic and social disadvantage.

Take for example the profitable and influential entertainment industry in this region. Producers and directors actively work to employ women who work to make themselves look less Asian. Many actresses get hair highlights and plastic surgeries with the core agenda of changing traditional facial and bodily features.

Ironically, I happen to be a misfit in a region where most women look like me. So I ask myself, how do I account for this, and where are we headed with inclusivity?

The obvious solution to this is to showcase diversity instead of simply preaching it. If years of colonial rule conditioned us to view fair skinned individuals as superior, then we must implement the same methods leaders used to gain official independence to decolonize our mindset and standards of beauty. As a society, we need to demand bringing women of all shapes and sizes into mainstream media that allows people to create their own authentic ideals.

Priyanshi Katare is a Weinberg sophomore. She can be contacted at [email protected] If you would like to respond publicly to this op-ed, send a Letter to the Editor to [email protected] The views expressed in this piece do not necessarily reflect the views of all staff members of The Daily Northwestern.