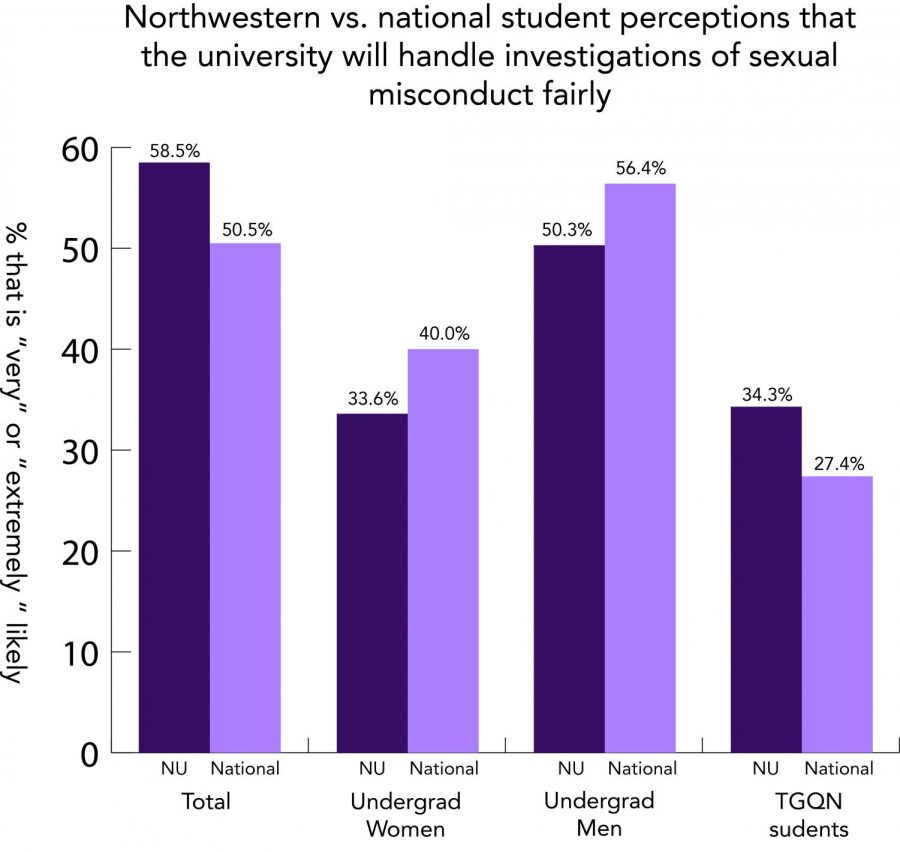 The Assocation of American Universities 2019 Campus Climate Survey on Sexual Assault and Misconduct, released last Tuesday, recorded over one in five students reporting that sexual assault or misconduct is very or extemely problematic at Northwestern.

About 25 percent of undergraduate and graduate students and one in three undergraduate students — almost 5,400 people — responded to the survey. This rate is “significantly higher” than the 15 percent participation rate from the first study conducted in 2015, according to Colleen Johnston, Title IX coordinator for the Office of Equity.

For Spencer Colton, a member of the Student Advisory Board for the Office of Equity, the numbers were disappointing but not surprising.

“It’s of course unfortunate, but just knowing what I know from other work that I’ve done about rates of sexual violence in those communities, that was pretty expected,” Colton said. “These numbers show the work that we need to be doing here, seeing that (these students) are still affected so strongly by sexual violence. It really shows that we have a lot to do in terms of acceptance and understanding of that community.” 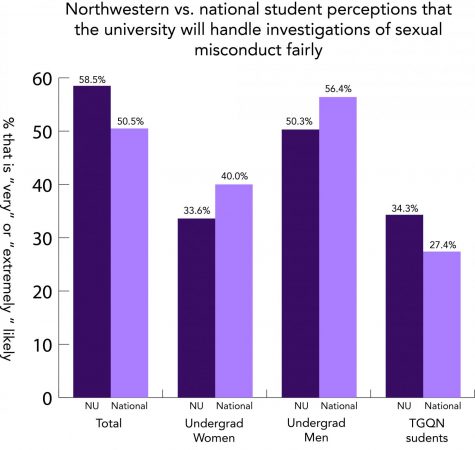 Broken down by gender, the study showed 30 percent of undergraduate cisgender women and 30 percent of TGQN students reported being victims of nonconsensual sexual contact by inability to consent, coercion or physical force — either by penetration, sexual touching or a combination of the two — since entering school. Of the undergraduate cisgender men surveyed, 11 percent reported they were victims of this conduct.

The survey asked students where sexual misconduct or assault had occurred on campus, either in the case of victimization or interference. Most frequently reported locations include non-dorm university housing university residence halls or dorms, “some other place,” fraternity housing, and restaurants, bars or clubs.

Reports of sexual misconduct or assault also varied across student backgrounds. Both non-heterosexual students and students with disabilities had a prevelance rate about 10 percent higher than their heterosexual peers and peers without disabilities, respectively.

Rainbow Alliance senator Alyssa Peterson said while the rates of nonconsensual sexual contact were similar amongst undergraduate cisgender women and TGQN students, looking at rates of sexual harrasment based on gender paints a different picture.

Peterson said she found these statistics “alarming,” especially when coupled with the administrative gray area “into which trans, genderqueer and nonbinary students are swept.”

“In order to create a safe and rich environment for LGBTQIA+ students to live and grow without fear of harassment, there needs to be an accurate way to gauge what this population looks like on campus in order to identify ways to target support for their specific needs,” Peterson said.

Sexual Health and Peer Education director Samuel Berston echoed Peterson’s call for administrative action. Berston said while he believes the Office of Equity is “committed to bringing perpetrators to justice,” there is a lack of student awareness and perception of assistance availability from university resources.

The SESP senior attributed these student attitudes to understaffing and underfunding, adding that the idea that Northwestern and faculty staff support victims of sexual violence should be “integrated into everyday life on campus.”

“In my opinion, the biggest issue that the data revealed is the lack of support students feel from the University around sexual assault and harassment,” Berston said. “The question I’m left with is: what should the University do to make students more aware of these resources and help them feel supported?”

Berston referred to the statistic that 58.5 percent of students believe it is very or extremely likely that campus officials would conduct a fair investigation in response to a report of sexual misconduct. In a University statement sent on October 15, Johnston noted this was a “bright spot” in the study’s results.

However, when the numbers are broken down further by gender, only 33 percent of undergraduate cisgender women and 34 percent of TGQN students perceived that it is very or extremely likely that Northwestern campus officials would conduct a fair investigation in response to a report of sexual assault or other misconduct. A little over half of undergraduate cisgender men reported the same.

“(A rate of) 58.5 percent is well above the peers, but scarily low,” University President Morton Schapiro told The Daily in an October interview. “That’s not acceptable… Students deserve to believe that we’re going to do this, we’re going to take it seriously and we’re going to do a fair investigation.”

Nationally, the AAU surveyed 32 other colleges and universities, reporting that 53 percent of undergraduate cisgender women and 43.6 percent of TGQN students believed officials would conduct a fair investigationcompared to 65 percent of cisgender men.

The survey was circulated last spring, representing the second large-scale effort to study NU students’ perceptions and experiences of sexual misconduct issues. The data from the 2015 survey resulted in multiple changes within the Office of Equity, including the creation of the Equity Outreach and Education Specialist position, currently held by Kate Harrington-Rosen.

Despite revealing multiple opportunities for improvement within campus safety and wellbeing, the survey showed promising results in regards to students’ willingness to take action against acts of sexual violence. Of the students who witnessed a situation that they believed could have led to a sexual assault, 83 percent reported having taken some type of action to prevent it.

Since arriving at Northwestern and having to initially access resources from CARE and the Office of Equity, Colton said he has felt his sense of safety increase as he has come to know the “human side” of these organizations. Overall, he said the best way for the campus to feel the same is if they hear it from students like himself.

“It’s time to start leveraging student voices to have those who know these resources really go out and say, ‘Hey, this is all you need to know about this, this is something that you should be using and you should have a working knowledge of in case you ever need it or somebody that you care about needs it,’” Colton said.