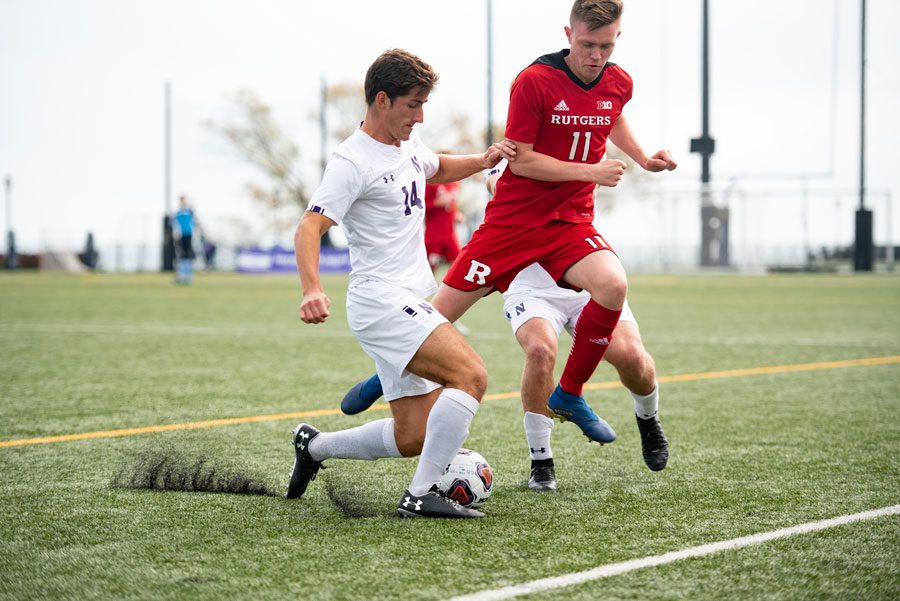 Martin Stadium was rocking in the 87th minute. The crowd cheered and stomped their feet as Northwestern lined up for a free kick that could break their 0-0 tie against Michigan State and give the squad a win going into Homecoming weekend.

At the start of the play, sophomore midfielder Richie Bennett rolled the ball backward in an attempt to distract the wall of Spartan defenders. Senior midfielder Matt Moderwell then stepped up and fired a curving shot past the defense. However, Michigan State goalie Hunter Morse dove and saved it, getting his fingertips on the ball just enough to deflect the shot.

“That was the first time I had tried (that shot) in a game,” Moderwell said. “It worked well — hoping next time it can slide through there. I knew after that I was due for a goal.”

Sophomore forward Jose Del Valle flicked his leg up and softly passed the ball to the right side of the goal, where no defenders stood. Moderwell sprinted to the ball, and as Morse stuck out his shin for a save, the senior sent his fourth goal of the season into the top right corner, pumping his fist before embracing his teammates.

“I knew overtime wasn’t really going to be an option for us,” Moderwell said. “We’ve worked on that play before. It’s one of our set plays and it was executed perfectly.”

NU’s win over the Spartans places them fifth in the conference and, for the first time since 2014, the Cats have now won back-to-back games against conference opponents.

Furthermore, NU’s win against Michigan State is their second against a team that participated in the 2018 College Cup of the NCAA Division I Men’s Soccer Tournament. The squad previously defeated defending national champion Maryland 3-1 in September.

Coach Tim Lenahan said the Cats have struggled with set pieces throughout the year. Attempts to work on the strategy have been difficult, he said, because of the team’s early season schedule, where NU usually had one day to practice in between games. However, the Cats’ 13 days off over the last three games have helped develop the team’s efficiency on set pieces.

“We kept talking about (how) we haven’t been great at set pieces, and if we’re able to add that our arsenal, that we could become a pretty dangerous team,” Lenahan said. “So that was good that we scored on a set piece tonight.”

NU struggled offensively in the first half. Despite taking three corner kicks, the Cats couldn’t manage to get a shot in the first 45 minutes. The Spartans didn’t play much better, only getting one shot on goal, which junior goalie Miha Miskovic saved in the 24th minute. Miskovic notched his second straight shutout in the victory and his fourth of the season.

In the second half, NU’s offense improved. The team took six shots to Michigan State’s four and added one corner kick.

Miskovic said the Cats, who are gunning for a home playoff game in the Big Ten Tournament, has a positive mindset going into their Big Ten finale.

“We’re going to win (our next game),” he said. “We’re going to make sure we end up as high as possible in the Big Ten and focus on the tournament after that.”