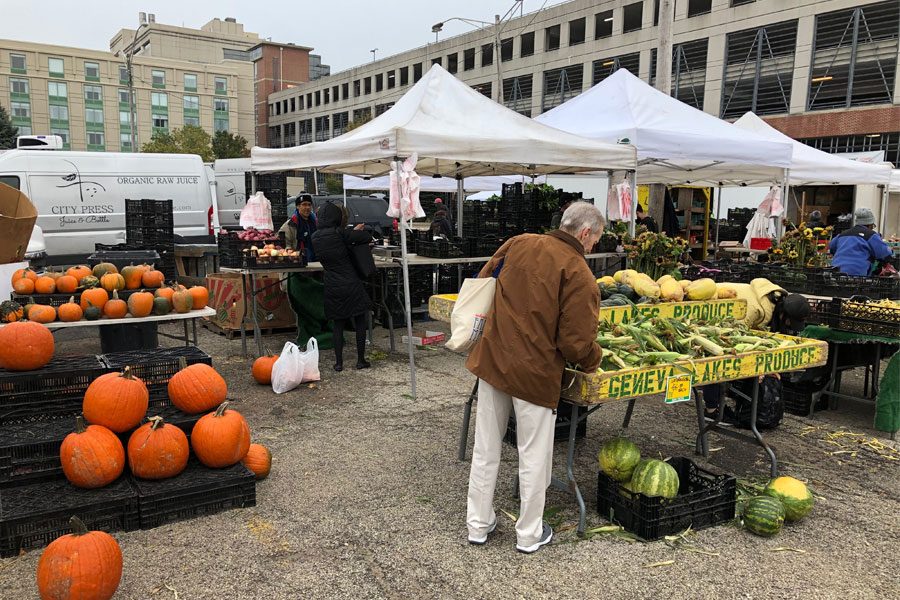 Evanston locals and vendors examine and move the produce and pumpkins available at the Downtown Evanston Farmers’ Market. Many such pumpkins were decorated and taken home by the children and families attending Fall Fest.

Downtown Evanston’s Farmers’ Market held a Fall Fest event to celebrate Halloween and entertain children with pumpkins, games and arts and crafts on Saturday, which marked its penultimate weekend.

The market runs every Saturday from 7:30 a.m. to 1 p.m. from May to November, bringing as many as 60 farmers, bakers and cooks to one central location behind the Hilton Garden Inn. Last weekend, costumed children decorated pumpkins with string, beads, markers and stickers in a novel Fall Fest tent at the back corner of the market. Market manager Myra Gorman said the event was a way to celebrate both Halloween and the harvest.

“This year we had free pumpkins and decorations,” added Tiffany Caston, one of the ten volunteers at the Fall Fest tent. “We were running out of stuff pretty fast — probably at least a hundred kids visited the market.”

In addition to decorations, families were also invited to guess the weight of two large pumpkins stationed in the tent, with the winner getting to take the pumpkins home.

Attendees of the market also danced and clapped along to the music of folk trio Slippery Elm as they played traditional Appalachian dance music and some rural tunes from Illinois.

People also flocked to the prepared food vendors, which served a variety of cuisines.

Vegan and gluten-free burgers and wraps, made entirely from local produce, were available at The Eating Well. Cocina Azteca sold freshly made burritos, empanadas and other staples of Mexican cuisine. Gotta B Crepes put their line cooking process on display, preparing sweet and savory stuffed crepes in front of customers.

Gorman said that the selection process for selling at the farmers’ market was quite competitive. Returning vendors have first pick and The Friends of Evanston Farmers’ Market, an affiliated non-profit, fills the remaining open slots — often only four or five.

Fall Fest comes at a time when attendance at the farmer’s market is tapering off with the end of the outdoor market just a week away.

“By now, some of the farmers have gone,” said Gorman. “It just gets slower the last two weeks.”

Market vendor Erin Stover said the rain, cold and other Evanston events held that weekend could have led to a decrease in attendance to the market.

“It’s not like other years, there’s hardly any kids,” Stover said. “I don’t think the festival necessarily drew anyone in… the people that were here that were buying things, were just stocking up today since it’s almost the last market.”